President Donald Trump Is Now One of 93 Million Obese Americans

President Donald Trump presents fast food to the Clemson Tigers in celebration of their national championship at the White House on January 14, 2019 in Washington, DC. On Feb. 14, 2019, the results of his annual physical showed he has become technically obese.
Chris Kleponis/Pool—Getty Images
By Abby Vesoulis

Approximately 93.3 million Americans are considered to be obese, according to Centers for Disease Control and Prevention estimates. Now, President Donald Trump is among them.

Dr. Sean P. Conley, the President’s physician, released the results of Trump’s annual physical on Thursday evening — almost a week after the examination. According to the memorandum obtained by TIME, the Commander in Chief is 6 foot 3 inches tall, weighs 243 pounds, has a resting heart rate of 70 beats per minute, and a blood pressure of 118/80.

His new height and weight ratio indicates a body mass index of 30.4, according to CDC guidelines. Anything above 30 is considered obesity.

The results also show Trump has gained four pounds since January 2018, and was prescribed an increased dosage of rosuvastatin, which is used to treat high cholesterol and prevent heart disease. Even so, Conley indicated Trump was in “very good health overall.”

But Dr. Gary LeRoy, a practicing family physician in Dayton, Ohio and the president-elect of the American Academy of Family Physicians, tells TIME that if somebody with health stats like the President’s wanted to establish himself as a new patient with his practice, they’d have to have a serious talk about lifestyle choices.

“With his age, with his height and weight,” he says, “his body mass index would be concerning to me.”

Though LeRoy has never examined Trump and cannot specifically address someone’s overall health without doing so, he did say the statistics indicate excellent blood pressure and a strong resting heart rate. Anything between 60 and 100 bpm is considered healthy, he says.

In the past, Trump has admitted he does not follow exercise regimes, outside of golf and running to meetings. But LeRoy says golf is not a very effective workout unless the participant is walking between holes.

“Golf is not an aerobic exercise, because you’re not doing something for 20 to 30 minutes with sustained elevation of your heart rate,” he says. “Riding around in a golf cart is not going to be a good form of cardiovascular exercise.”

Trump is also known for eating fast food. When he invited Clemson University’s football team to the White House last month to celebrate their national championship win, he served burgers and fries from several national chains. At one point during his 2016 presidential campaign, Trump scarfed down 2,530 calories worth of McDonald’s, his former campaign manager said. However, CNN reported last May that the President was attempting to make changes to his diet in an effort to shed pounds.

LeRoy says it’s easy to skip workouts and eat junk food from time to time, but the consequences tend to be more problematic as you age.

“A person at 72 is reaching the average life expectancy of a male in this country,” he says, adding that the national average for men is about 76 years old.

Because of that, LeRoy says it’s important for people over 50 to keep in mind personal risk factors like family histories of heart disease, cancer and other medical maladies.

The President, however, maintains that he doesn’t have to worry about that.

“I have good genes,” he’s declared. 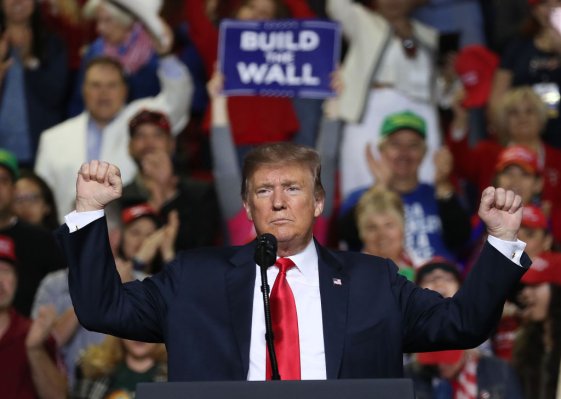