'I've Never Heard Any Discussion of the 25th Amendment.' Pence Denies Report There Was Effort to Remove President Trump

Vice President Mike Pence speaks while visiting Polish and U.S. soldiers at a military base on Feb. 13, 2019 in Warsaw, Poland.
Sean Gallup—Getty Images
By Abigail Abrams

McCabe’s remarks reportedly came during an interview on CBS’ 60 Minutes that is scheduled to air Sunday, ahead of the release of his new book The Threat: How FBI Protects America in the Age of Terror and Trump. CBS News’s Scott Pelley appeared on CBS This Morning on Thursday to discuss the interview, and said McCabe told him Justice Department officials were “trying to figure out what to do” with Trump after the President fired FBI Director James Comey in May of 2017.

“There were meetings at the Justice Department at which it was discussed whether the vice president and a majority of the cabinet could be brought together to remove the president of the United States under the 25th Amendment,” Pelley recounted. “These were the eight days from Comey’s firing to the point that Robert Mueller was appointed special counsel. And the highest levels of American law enforcement were trying to figure out what do with the president.”

CBS has not released that portion of the interview that includes McCabe discussing the 25th Amendment. The full sit-down is scheduled to air Sunday at 7 p.m.

Following the CBS revelation Thursday morning, Pence told NBC News’ Andrea Mitchell on that he found any suggestion of using the 25th Amendment to remove Trump from office was “absurd.”

“I’ve never heard any discussion of the 25th amendment by any members of this government and I would never expect to,” the Vice President said.

The 25th Amendment to the Constitution deals with the line of succession for the President. The amendment’s fourth section, which has never been invoked, allows the vice president and a majority of cabinet secretaries to declare a president “unable to discharge the powers and duties of his office.”

This is not the first time the 25th Amendment has come up during Trump’s presidency. The topic has been floated since Trump took office in 2017, often coming up in liberal circles and from Trump critics. But it has also popped up in more serious reports.

McCabe’s comments add to earlier reports that government officials had discussed the possibility of invoking the amendment. Last fall, an op-ed in the New York Times written by an anonymous Trump administration official said there had been “early whispers within the cabinet of invoking the 25th Amendment” and then a Times report just a few weeks later mentioned the 25th Amendment discussions and said that Deputy Attorney General Rod Rosenstein proposed wearing a wire to meetings with Trump.

During his 60 Minutes interview, McCabe also reportedly brought up the offer from Rosenstein to wear a wire in meetings with Trump. A Justice Department spokesperson previously said Rosenstein’s suggestion was sarcastic, but Scott Pelley said the remark was not a joke.

“McCabe in [the 60 Minutes] interview says no, it came up more than once and it was so serious that he took it to the lawyers at the FBI to discuss it,” Pelley told CBS This Morning.

The Justice Department issued another statement on Thursday, saying that McCabe’s account was not accurate. “The Deputy Attorney General again rejects Mr. McCabe’s recitation of events as inaccurate and factually incorrect,” the statement said. “As the Deputy Attorney General previously has stated, based on his personal dealings with the President, there is no basis to invoke the 25th Amendment.”

McCabe also said he ordered an obstruction of justice investigation into Trump after talking with him directly after the President fired Comey.

“I was very concerned that I was able to put the Russia case on absolutely solid ground, in an indelible fashion,” McCabe said in a portion of the “60 Minutes” interview published on Thursday. “That were I removed quickly, or reassigned or fired, that the case could not be closed or vanish in the night without a trace.”

McCabe was later fired in March of 2018 just before he was set to retire.

“I wanted to make sure that our case was on solid ground,” he added. “And if somebody came in behind me and closed it and tried to walk away from it, they would not be able to do that without creating a record of why they’d made that decision.”

Over the course of his presidency, Trump has often criticized the investigation into his campaign’s possible involvement with Russian interference in the 2016 election. He appeared to react to McCabe’s interview on Thursday, taking to Twitter to criticize the former FBI official. 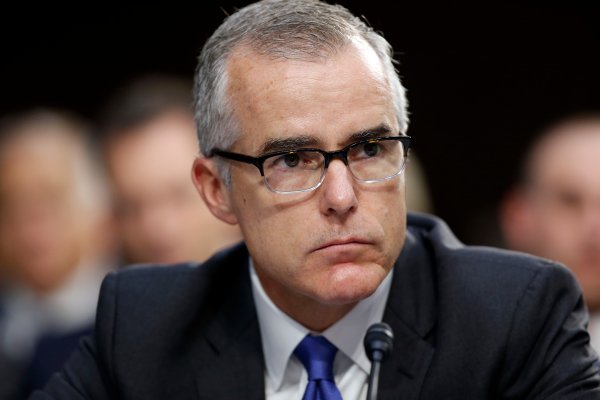 Former Acting FBI Director McCabe Says He Opened Trump Investigations Out of Fear the Case Might 'Vanish'
Next Up: Editor's Pick