A Growing American Crisis: Who Will Care for the Baby Boomers?

Every day since her husband broke his hip, Beatrice Egger has been afraid. The 91-year-old retired teacher worries when William, 90, a retired principal, is in the shower. She worries when she is helping him get dressed and he unsteadily towers over her. And she worries when he moves from sitting to standing or from room to room. When he falls, which inevitably happens, she can call upon aides at their Issaquah, Wash., retirement home to help get him back up. But they can’t help her all the time. So she stays scared.

If they could afford it, Beatrice and William would hire a home care aide to help during the day. That would give Beatrice a safety net, a pair of younger stronger arms to steady William. They know they’re lucky that their pensions afforded them life in a retirement community, food and some level of care. But they live in fear that William’s next fall will prove fatal and, without his pension, Beatrice might not be able to afford her community; after a lifetime of middle-class jobs, she might be forced into Medicaid.

Beatrice is one of 43 million unpaid caregivers in America, a number poised to spike as the Baby Boomers, who comprise most of the family caregivers now, join the ranks of the oldest old. “Family caregivers make up a silent support army — without them, health and social systems within our aging societies would be absolutely overwhelmed,” says Scott Williams, who oversees Embracing Carers, an international caregiving initiative for pharmaceutical company EMD Serono. The group conducted a survey of unpaid caregivers in 2017, which found that nearly half of family caregivers suffer from depression, and 45% did not have time to book or attend their own medical appointments as a result of their caregiving activities — thus putting caregivers at risk of falling ill and needing caregiving themselves. A 2002 Stanford University study found that 40% of Alzheimer’s and dementia caregivers actually die from stress-related disorders before the one for whom they are caring.

Compounding pressure on this unpaid labor force is a shortage of paid caregivers to fill a growing class of jobs that are troubled by low pay and poor working conditions. The Bureau of Labor Statistics ranked home health and personal care aides as among the fastest growing occupations, with an anticipated 1.2 million new jobs anticipated between 2016 and 2026. But these are already jobs that most Americans don’t want, leading to high turnover rates of 74% annually in nursing homes. So who will be filling these jobs?

America is not prepared for this coming shortage. Congress and the White House have kicked the can down the road, effectively waiting for the issue to become a crisis before they deal with it. But caring for America’s elders is the single most expensive domestic priority on the horizon, breaking the projected budgets of both Medicare and Medicaid, all 50 states and most of the middle class, and the truth is, no one is truly prepared for what is to come. And so states are beginning to take the lead to address the issue: Washington State, where the Eggers live, Hawaii and Maine are amongst the first to try to get ahead of the crisis.

For those who haven’t yet dealt with this problem, here are the ground rules confronted by any elder caregiver. First, Medicare does not pay for long-term care. Period. At most it pays up to 100 days of skilled nursing per disease. Unless your loved one is among the 2% of Americans smart or flush enough to take out increasingly expensive long-term care insurance, your only recourse is paying out of pocket or, if you’re anywhere near the poverty line, spending down your loved one’s assets so they can qualify for Medicaid.

“No one could consider not insuring their homes against fire. But when you look at long-term care, people don’t buy insurance because they can’t afford it even though one out of four people are going to need it,” says Rep. Drew C. MacEwen, a Republican representing Mason County, west of Seattle, who is sponsoring a bill currently before Washington State’s legislature to create a state-sponsored long-term care program. “Doing a statewide program makes it affordable.”

Washington State is bracing for a dual catastrophe: the anticipated 2026 insolvency of the federal Medicare hospital trust fund, which funds much of Medicare spending, and their own state’s Medicaid bankruptcy. In any state, no matter how well prepared, sheer demographics will overwhelm the system. Washington in 2015 spent $1.7 billion on long-term care. By 2030 that number is expected to more than double to over $4 billion as the population ages and the number of available family caregivers declines from an average of seven today to four in 2030, according to Rep. Laurie Jinkins, a Democrat from Tacoma and the other co-author of the bill.

MacEwen and Jenkins’ measure would impose a small employee tax to create a fund to help Washingtonians for care. The fund would provide a menu of benefits, from setting up a state-sponsored long-term care insurance fund that makes care more affordable to paying and training family caregivers like Beatrice, to paying up to $100 a day for in-home caregivers or for aides to visit facilities. So Beatrice could also get the aide to help with William that she needs. By helping families stretch the dollars they do have, the bill’s sponsors hope they can help families like the Eggers avoid state-sponsored Medicaid down the road. The state estimates the bill will save it $37 million in 2025, the first year the fund is active, and nearly $4 billion by 2052. This would not only help state finances, though; it would also arguably improve care by allowing more people to age in place with their families, rather than in institutions that are often grim.

If passed, Washington will join only Hawaii in states that are actively preparing for the coming caregiving cliff. Hawaii in 2017 approved a measure to provide up to $70 a day to support family caregivers who also work outside the home, a benefit that can be used for a home health aide or adult daycare. But Washington would be the first state to impose a payroll tax to such an end. And passage is not a foregone conclusion. Last year, a similar measured failed, when groups such as AARP opposed some of the eligibility requirements of the measure.

Maine, the nation’s oldest state, failed to pass a similar initiative in 2018. That provision would have created a home care fund through an income tax on high earners to help Maine families pay for care. It also would have increased pay for the home care workforce and allowed workers to unionize, creating a category of jobs that would enable more young people to stay and work in Maine. Currently, low wages and poor working conditions for home care workers contribute to annual turnover rates exceeding 66%.

The Maine measure had widespread opposition in the business community, with opponents questioning the proposed regulatory scheme and countering that increasing income taxes would have a negative effect on the economy.

Congress isn’t totally unaware of the coming train wreck. For the 2009 Affordable Care Act, lawmakers debated the CLASS Act, a provision that would have created a national public long-term care insurance program. But it was eventually taken out in the Senate bill because it was deemed too expensive. In 2017, Congress passed the RAISE Act, which created a national panel to develop a strategy to address the issue and beefed up funding for caregiver innovation grants at the National Institute of Health and the National Institute of Aging. The first report is due at the end of 2020, and the group is expected to report biennially after that. In the meantime, Senators Susan Collins and Bob Casey have introduced the Geriatrics Workforce Improvement Act. And already, through tax breaks and incentives, lawmakers have successfully incentivized people to age at home, which is far cheaper than institutionalized care. But it is clear that much more needs to be done. With 10,000 Baby Boomers retiring every day, we are only at the beginning of this demographic danger.

The original version of this story misstated Scott Williams’ last name. It is Williams, not Walker. 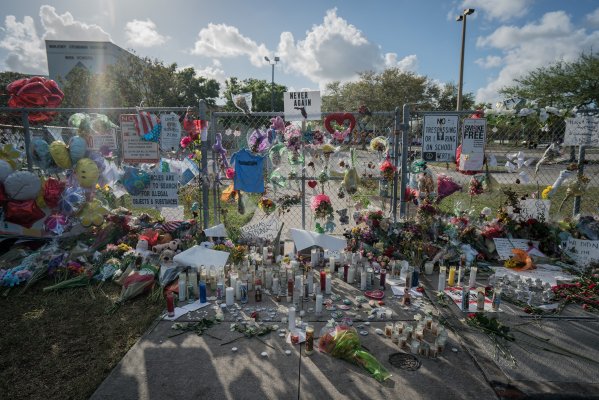 To the Parkland Parents: I Lost My Son at Sandy Hook. Here’s Some Advice for this Painful Anniversary
Next Up: Editor's Pick