Lorena Bobbitt takes the witness stand in her trial for cutting off her husband's penis in January 1994.
Consolidated News Pictures/Getty Images
By Olivia B. Waxman

Jordan Peele, an Executive Producer of Amazon’s new docu-series Lorena, available to stream starting Friday, has said that the series “reframes Lorena Bobbitt’s story around issues of sexism and domestic abuse” and will provide a “new view into how America got her story wrong and maybe continues to get it wrong.”

The fact that domestic abuse is so top-of-mind for the people behind Lorena is itself evidence that American society has come a long way since 1994, the year Bobbitt was acquitted of “malicious wounding” after she cut off her husband John Wayne Bobbitt’s penis with a kitchen knife and threw it out her car window near their home in the Manassas, Va., area. The jury came to its decision by reason of her temporary insanity, and she spent 45 days in a mental hospital; the penis was found shortly after the incident and surgically re-attached to her husband, who was also found not guilty of sexually assaulting his wife. John Bobbitt denies claims that he abused her, though that has long been the window through which she has spoken about the incident. “I had a history of domestic violence, so that drove me to do what I did to him,” she told TIME in June on the anniversary of the incident.

“It was a real struggle to get anyone to view this as a domestic violence case [back then],” says Kim Gandy, President and CEO of the National Network to End Domestic Violence and former president of the National Organization for Women (NOW), and one of the experts interviewed in Amazon’s Lorena. “From the perspective of advocates who were fighting domestic violence, it was clear to us that it was a domestic-violence case and that was a large part of what had gone on and the reaction to it. But it was not widely seen as a domestic-violence case because, in great part, people only knew what they heard in the media and what they saw on television. The media was almost singularly interested in the injury to [John] Bobbitt.”

Gandy was at NOW when the case happened and says the organization attempted to draw focus to the deeper issues behind the case, but that they were unable to break through the noise about its more gruesome aspects.

Still, those who were paying attention could see that something was changing — or that something had already changed, and Lorena Bobbitt could be the face of that difference the way that Anita Hill had become the era’s face of the changing discussion about workplace sexual harassment. The episode had “all the makings of a radical-feminist urban legend” and Lorena Bobbitt “has become something of a feminist folk hero,” TIME noted when the case was beginning. And in a controversial essay for the magazine, the writer Barbara Ehrenreich observed that the women’s liberation movement of the previous decades had led to increased awareness of a crime that had been “defined as what men have been getting away with for centuries” and that feminism had given “millions of women the idea that makeup is not the solution to chronic bruising.” Though Ehrenreich acknowledged that advocates differed on how to interpret Bobbitt’s actions, it was easy to see why some might see her as representative of the idea that women who suffered abuse at home were ready to take matters into their own hands.

The fact that the jury found her not guilty represented a new level of public awareness too, legal experts said. “Fifty years ago, Lorena Bobbitt would have been convicted without a shadow of a doubt,” Lawrence Friedman, a Stanford law professor, told the magazine back then. “They would not have listened to any argument that her deed was justified by a history of abuse. They would have focused on the act itself, which horrifies all males.”

And yet, Gandy says, that changed national awareness didn’t immediately translate into concrete help for women in that situation.

“In terms of this case having a national impact on a public call for better laws, it didn’t really,” Gandy says. “We thought that Lorena’s case might get domestic violence to the forefront and get people talking about why we need to do something. It didn’t have the effect we hoped it would have. But from the perspective of advocates, I would say to some degree it re-inspired advocates to fight even harder.”

The domestic violence case that is seen as having woken people up to the issue was later that year — and it was even bigger news: The O.J. Simpson case. After the bodies of the former NFL running back’s ex-wife Nicole Simpson and her friend Ron Goldman outside her condo in Los Angeles by one of her neighbors shortly after midnight on June 13, 1994, her therapist said that the football player physically abused her, leading O.J. Simpson to be charged with murdering the two later that week. As a TIME cover story that July put it, the O.J. Simpson case “awaken[ed] America to the epidemic of domestic abuse.” In 1995, a jury found him not guilty of the two murders.

Senate negotiations on the Violence Against Women Act, written by then Senate Judiciary Committee chairman Joe Biden (D-DE), were already underway during the Bobbitt episode, but President Clinton didn’t sign the bill into law until September of that year, after the O.J. case broke. The law was designed to coordinate community responses, especially training for first responders, law enforcement and judges. The law also provided another critical funding stream for helping domestic violence victims.

Of course, 1994 wasn’t the beginning of the history of American domestic violence — or of the effort to stop it. The Violence Against Women Act came a decade after The Family Violence Prevention and Services Act of 1984, which Gandy calls “the first federal funding for domestic violence shelters.” President Reagan signed that act on Oct. 9, 1984, one day after another newsmaking story about domestic violence: the airing of The Burning Bed, starring Farrah Fawcett, a hit TV movie adaptation of the 1980 book on the true story of a Michigan woman who claimed that years of physical abuse drove her to kill her husband by setting him on fire while he slept. (A jury found her not guilty of murder by reason of temporary insanity.) Before then, shelters tended to be more makeshift. For example, NOW chapters — as Gandy’s in New Orleans did in 1974 — had been starting rape crisis lines, and the women who monitored them started taking callers who complained of “wife beating,” as domestic violence was called back then, into their own homes. These services weren’t widely known in the era before social media and email listservs, and the women depended on funding sources like garage sales.

And in the post-Lorena Bobbitt era, the way Americans see the issue of domestic violence has continued to change.

The increased use of the Internet has meant increased access to resources for sufferers, and another watershed moment in terms of raising awareness of this issue came in September of 2014, when video leaked of Baltimore Ravens running back punching his then-fiancée (now wife) in an elevator. (The NFL suspended him shortly after the video came out.) The Violence Against Women Act is supposed to be reauthorized every five years, and in recent years that’s become harder. The latest government shutdown has delayed its reauthorization, and it’s not included in the new border security deal, Roll Call reports. While social media has helped mobilize domestic violence victims, it’s also helped mobilize those opposed to the law. And as Gandy sees it, the growth of the #MeToo and #TimesUp movements has not only shed new light on violence between men and women, but also allowed victims to start the conversation their way.

“Back in the early 1990s, activists and advocates were highly dependent on the news media to get information out,” Gandy says. “The #MeToo movement is a time when women have been able to tell their stories and not have to tell them through the news media. Lorena Bobbitt was at the mercy of the way that the media outlets chose to tell her story. And most of the reporters were men back then. The male reporters had a particular perspective on what the real story was.”

These days, Bobbitt herself feels like she’s “part of” the movement, too. She spends her days volunteering at shelters for victims of domestic violence, so that she can provide other women with the support she felt she didn’t get at the time, and is a fixture on the speaker circuit, attending various conferences on domestic violence issues.

“Now we can talk a lot more, but there’s still a stigma,” as she recently told TIME. “There are still a lot of loopholes that need to be closed. I don’t want to see another 25 years pass by and not be able to protect women more…There’s so much more that we can still do to protect women.” 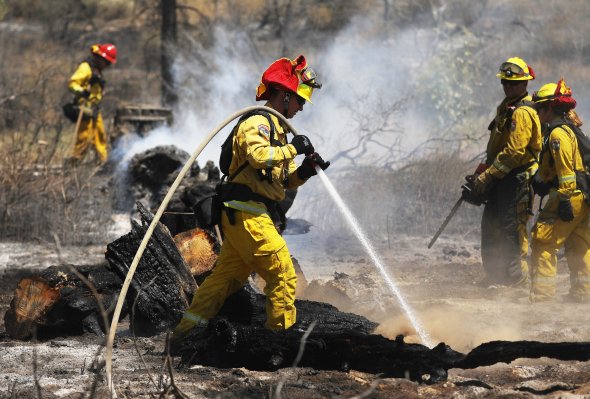 California Man Sentenced to 12 Years for Starting Fire
Next Up: Editor's Pick