A 'now hiring' sign hangs on the door of a Staples store in Lower Manhattan on Jan. 4, 2019 in New York City.
Drew Angerer—Getty Images
By Katia Dmitrieva / Bloomberg

The number of positions waiting to be filled rose by 169,000 to 7.34 million, from an upwardly revised 7.17 million in the prior month, according to the Labor Department’s Job Openings and Labor Turnover Survey, or JOLTS, released Tuesday. The quits rate remained at 2.3 percent, indicating confidence that job prospects remain strong.

The record number of open jobs shows employers are still struggling to find workers, with little reprieve in sight. While the latest data are for December, the January jobs report on Feb. 1 showed surprising strength in payrolls and continued wage gains. The quits rate held steady as 3.48 million Americans left their jobs, the fourth straight decline though still near the record in August. Federal Reserve policy makers watch the rate for signs of upward pressure on worker pay that may feed into inflation. Job postings exceeded the number of unemployed people by more than 1 million for a third month, though the gap narrowed from the prior month. More job openings than unemployed Americans points to a strong labor market, boding well for worker pay.

What Our Economists Say…

The December JOLTS report confirms that labor-market conditions remain tight. Worker shortages have persisted, which should lead to firmer wage pressures and intensifying inflation later this year. Under these conditions, Bloomberg Economics expects the Fed to raise the target for the federal funds rate two more times in the second half of 2019.– Tim Mahedy and Carl Riccadonna, Bloomberg Economics

Hiring increased to 5.91 million while separations fell to 5.55 million. Categories showing increases in openings included construction, health care and social assistance, and accommodation and food services. Although it lags a month behind other Labor Department data, the JOLTS report adds context to monthly employment figures by measuring dynamics such as resignations, help-wanted ads and hiring. 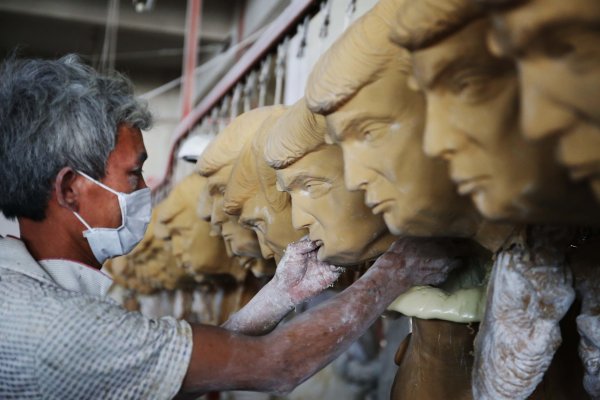 Trump Still Has Lots of Face at This Chinese Factory
Next Up: Editor's Pick