The Men Behind GPS Just Won a Prestigious Engineering Prize. Not on the Prize List: a Woman

It’s an innovation that allows you to pinpoint your earthly location with just the phone in your pocket; it helps drivers navigate tricky routes, and it can even direct rescuers to stricken people in disaster zones. But Dr. Bradford Parkinson wasn’t able to use his brainchild, GPS, to stop himself getting lost in London, he quipped on Tuesday, as he and three others were named winners of the £1 million ($1.29m) Queen Elizabeth Prize for Engineering.

The prestigious prize has been awarded every two years since 2013 to engineers responsible for innovations that benefit all of humanity. This year’s chosen technology, which stands for Global Positioning System, joins other far-reaching winners including the Internet and the cellphone camera. James Spilker, Hugo Fruehauf, and Richard Schwartz were also named for their contributions.

But the announcement on Tuesday steered the judging panel directly into a controversy, as it became clear that this year’s winners were all male — and that, after four biannual awards, one of the world’s highest-profile and most valuable prizes for engineering has still not been awarded to a woman.

Worse still, a female mathematician did help shape the technology that led to GPS. Dr. Anne-Marie Imafidon, the CEO of Stemettes, a company that encourages girls to take up STEM subjects, pointed out the contribution of Dr. Gladys West, who developed algorithms used by satellites to map the shape of the Earth, a breakthrough which was essential to the success of the GPS project. “I’m gutted and I’m disappointed,” Imafidon told TIME on Tuesday.

West was hailed as a “hidden figure” and inducted into the Air Force Space and Missile Pioneers hall of fame in 2018, after her story began to receive greater attention in the press. Her recognition came at a time of wider mainstream understanding of how the achievements of women and people of color are often written out of history and systematically ignored by official bodies.

The judges did consider West for the award, the chairman of the judging panel, Christopher Snowden, told TIME. But they eventually decided against it because she didn’t make a “fundamental” contribution to GPS technology, he said. “She made immense contributions in some of the algorithmic work, but it wasn’t related to the actual fundamentals,” Snowden said. “You can’t give everybody a prize. So you have to look for those who really were the leaders and the key contributors to this. And that’s what we did in this particular case.”

But that answer, Imafidon said, exposed the marginalizing structures that first keep women and minorities away from STEM fields, and then sweep their achievements under the rug when they overcome great odds to succeed. “I am gutted that they did not see fit to take this opportunity to recognize the varied achievements of different people involved in the GPS project, on what sounds like a technicality,” she said. “You set the rules.”

“This is just another example of women being written out of history,” she continued. “Live, in front of us, in 2019. It’s unbelievable.”

For their parts, the recipients of the prize were clear that GPS was not the achievement of four men alone. “It’s a recognition of scores of engineers that actually made it possible,” said Parkinson, the chief architect. “Like so many things in our civilization, it is building on technologies and pieces that are gathered together in a new and exciting way.”

GPS is “a pioneering innovation which, for the first time, enabled free, immediate access to accurate position and timing information around the world,” the Prize’s awarding body said in a statement.

Parkinson, often called the “Father of GPS,” was joined at the London ceremony by Spilker, Fruehauf, and Schwartz. All expressed a mixture of gratefulness and bafflement that their work from the 1970s and 80s was being awarded a prize in 2019. “It’s the weirdest thing ever to be recognized for something that you did 40 years ago,” said Schwartz, who designed the satellites which broadcast GPS signals down to Earth. “How many other technologies are 40 years old, and not old?”

The sense of wonder that a technology over four decades old could continue to be the foundation for new and innovative uses today — like ride sharing and even banking systems — was picked up on by the panel presenting the award, too.

Part of the reason GPS has become such an influential technology is its accessibility: Parkinson, the chief architect, was adamant from day one that access to GPS wouldn’t be restricted to the U.S. military, which initially funded the project. “At some point I decreed that there was going to be a civil signal,” he said. “I never asked whether we could do that.”

But that civil signal — which any user around the world can access without having to ask the U.S. military — also means that companies can do whatever they like with the technology. As one of the winners put it on Tuesday, “you can’t separate the good from the bad.”

The designers of GPS had warnings about potential misuses of the technology, for example the tracking of users by big tech companies like Google and Facebook. “That’s people misusing it, that kinda stuff,” said Schwartz, one of the winners.

When tech companies hide their uses of GPS tracking behind lengthy terms and conditions, Parkinson tells TIME, that’s when GPS can be a tool for bad. “The difficulty is, it’s a checkbox and you don’t know what the implications are,” he said. “If it were explained and you said yes, fair enough. But I worry that the check box alone doesn’t tell you what the implication is.”

The “Father of GPS” went on: “I think there ought to be some kind of universal check mark on your cell phone that says, I don’t want anyone to track me, period.” 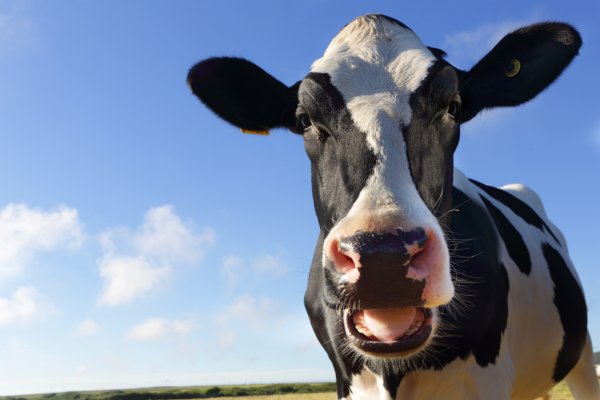 'Tinder for Cows' Is Now a Thing, and British Farmers Are Using it to Breed Cattle
Next Up: Editor's Pick