Here's What Taylor Swift Skipped the 2019 Grammys For

If you watched the 61st Annual Grammy Awards on Sunday, you may have been wondering where in the world Taylor Swift was.

But with her most recent album, Reputation, receiving only one nomination from the Recording Academy, the frequent Grammy award collector opted to attend the official BAFTAs after-party with her boyfriend, Joe Alwyn, rather than make an appearance at Los Angeles’ STAPLES Center.

Alwyn stars alongside Olivia Colman, Rachel Weisz and Emma Stone in The Favourite, which took home seven awards at Sunday’s BAFTAs ceremony, including Outstanding British Film. Swift did not attend the ceremony itself, but showed up in a powder blue Stella McCartney dress and matching coat to support Alwyn at the post-awards dinner.

“AHHHHH @thefavouritemovie just won 7 @baftaawards !!!” Swift captioned an Instagram of herself posing in the sleeveless gown. “Bout to go give some high fives – thanks @stellamccartney for this dressss.”

Swift is currently in London filming the forthcoming movie adaptation of the musical Cats. 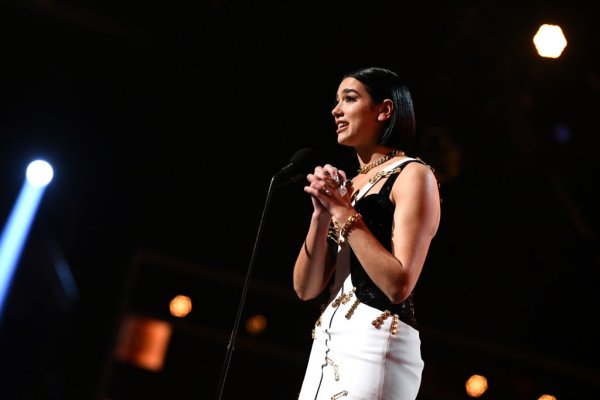 Dua Lipa Worked a Clapback About Female Artists Needing to 'Step Up' Into Her Grammys Acceptance Speech
Next Up: Editor's Pick