Here's How the Grammys Explained Why Drake's Speech Got Cut Off

While many famous faces were notably absent from the 2019 Grammys, Drake made a surprise appearance to accept his “Best Rap Song” award for “God’s Plan” — but was cut off while he was still delivering his acceptance speech by Grammys producers.

The Canadian rapper, who’s known for passing up on awards shows, made his first appearance at the Grammys since 2013 — especially notable since he’s been a vocal critic of the Recording Academy and its failure to recognize artists of color and genres like hip hop in the past.

“I want to take this opportunity while I’m up here to just talk to all the kids that are watching this, aspiring to do music,” Drake said. “All my peers that make music from their heart that do things pure and tell the truth, I wanna let you know we’re playing in an opinion-based sport not a factual-based sport. So it’s not the NBA where at the end of the year you’re holding a trophy because you made the right decisions or won the games.”

Drake then went on to express that he felt fans were most important.

“This is a business where sometimes it’s up to a bunch of people who might not understand what a mixed race kid from Canada has to say or a fly Spanish girl from New York or anybody else, or a brother from Houston right there, my brother Travis [Scott]. But my point is you’ve already won if you have people singing your songs word for word, if you’re a hero in your hometown. Look, if there’s people who have regular jobs who are coming out in the rain, in the snow, spending their hard earned money to buy tickets to come to your shows, you don’t need this right here. I promise you, you already won. But…”

The rapper was then cut off abruptly, with the broadcast going immediately to a commercial, sparking a strong reaction online. In a statement to Variety, the Grammys said that they did not cut off Drake early intentionally, but were under the impression that he had finished his speech.

“During Drake’s speech, there was a natural pause and at that moment the producers did assume that he was done and then cut to commercial,” Sunshine Sachs’ Michael Samonte said. “However, the producers did speak with Drake following his speech and did offer him to come back on stage to finish whatever his thoughts were. But Drake said he was happy with what he said and didn’t have anything to add.”

In an interview with the New York Times last week, longtime Grammys producer Ken Ehrlich said that Drake, along with Childish Gambino and Kendrick Lamar, declined to be performers for the 2019 awards show. Gambino and Lamar chose not to attend the 2019 Grammys at all. 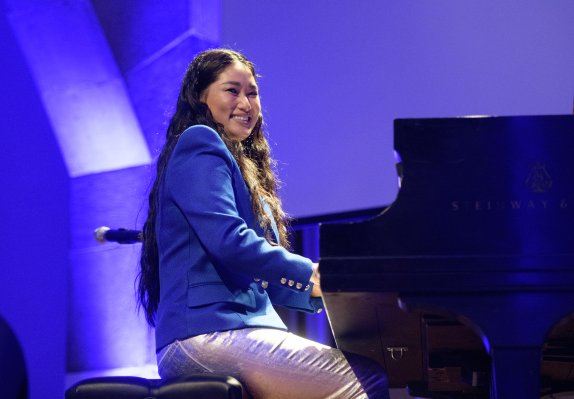 'I Just Wanted it to Be Pretty.' Everyone's Favorite New Exuberant Pianist Discusses Her 2019 Grammys Performance
Next Up: Editor's Pick