Climate Change, ISIS and Cyberattacks Are Seen as the World's Top Threats in a New Pew Poll

Protestors hold up a sign reading "There is no Planet B" in Munich, Germany on Feb. 2, 2019.
Alexander Pohl—NurPhoto/Getty Images
By Casey Quackenbush

Climate change increasingly ranks as the world’s most pressing security threat, with terrorism and cyberattacks also topping the list, according to a new survey by the Washington-based Pew Research Center.

In a poll of 26 countries, 13 considered the warming planet the number one concern. This was followed by the threat of Islamic State in Iraq and Syria (ISIS), which eight countries, including Russia, France, Indonesia and Nigeria, rated as the top threat. Four nations, including Japan and the U.S., cited cyberattacks as the most urgent issue.

The survey found the largest shift in global sentiment centers around American influence. Across ten countries, roughly half or more of the respondents claimed that U.S. power poses a major threat to their country. In Mexico, 64% of those surveyed flagged American influence as problematic. Those concerns have skyrocketed since the election of President Donald Trump.

The survey notes a “strong connection between seeing America as a threat and lack of confidence in U.S. President Donald Trump.” In 2013, when Barack Obama was president, only a quarter of respondents across 22 nations saw American power as a danger, according to Pew.

Many countries also expressed concern over North Korea’s nuclear program, but none of the 26 nations ranked it among the top two threats. Even fewer listed the global economy as a major hazard. 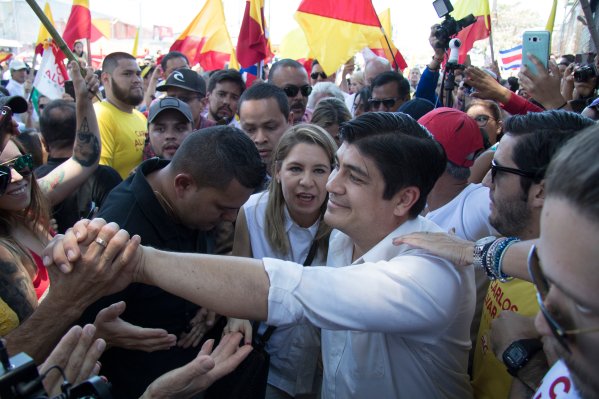 Costa Rica's President Carlos Alvarado Quesada Wants to Set a Green Example for the World
Next Up: Editor's Pick