'Happy Birthday to Me!' Diana Ross Sparkled During Her 75th Birthday Grammys Performance

In a night with a number of impressive performances, Diana Ross made a memorable impression at the 61st Grammy Awards with a medley of songs including “The Best Years of My Life.” The pop icon performed at the ceremony to celebrate her 75th birthday, which will take place in March. “Happy Birthday to Me!” she exclaimed after concluding the performance.

“Together we have no limits. There’s only success ahead, and you can lead the way,” Ross told the audience at the ceremony, after an introduction from her 9-year-old grandson. “Learn, dream, unlock new doors. All is possible with music and with you.”

Despite twelve nominations over two decades, Ross never won a competitive Grammy award for her music, though she was honored with the Recording Academy’s 55th Annual Lifetime Achievement Award in 2012. She was also nominated for Best Actress at the 1973 Academy Awards for her role in Lady Sings the Blues.

Ross’ first solo Grammy nomination was for Best Contemporary Vocal Performance—Female for the hit “Ain’t No Mountain High Enough” at the 13th Grammy Awards in 1970. But her Grammys experience began years earlier with two nominations as one third of The Supremes, in 1964 and 1965 for “Baby Love” and “Stop in the Name of Love,” respectively.

Never one to shy away from the stage, Sunday’s performance offered a window into Ross’ new Las Vegas residency, “Diamond Diana,” at the Wynn Las Vegas. Also in honor of her 75th birthday, the residency concludes on Feb. 23. 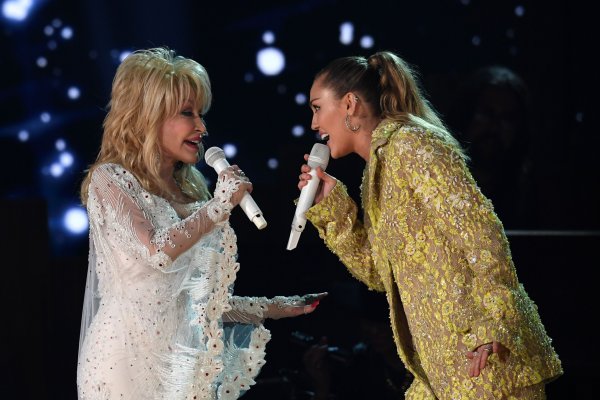 Dolly Parton Starred in Her Own Exuberant Grammys Tribute
Next Up: Editor's Pick