This Fashion Show Sent Models Crowd-Surfing Through the Audience

Models did not strut down the runway at the Telfar fashion show on Thursday night in New York; instead, the diverse group trust-fell into the crowd before crowd-surfing through the attendees packed on the floor of Irving Plaza, making for a New York Fashion Week show that won’t soon be forgotten.

The show, titled “Country,” was the brainchild of designer Telfar Clemens and “Slave Play” playwright Jeremy O. Harris. Using elements like ragged Americana visuals and music samples of rap, blues and R&B, the fashion show was more of a performance art piece, a meditation on race and its role in American life — perhaps even more poignant in the fashion space, given the recent spate of racist imagery in high fashion.

Harris was the first to fall into the crowd, opening the show in a deep blue corduroy suit; besides Harris, Clemens had many other creative collaborators who participated in the show by lending their talents or their bodies to the spectacle of it all, including musicians Oyinda, Butch Dawson, and Robert Randolph. The show soon devolved into a high-energy after-party, thanks in part to its sponsorship by Budweiser and White Castle, the latter of which Clemens has had a longtime creative collaboration with. 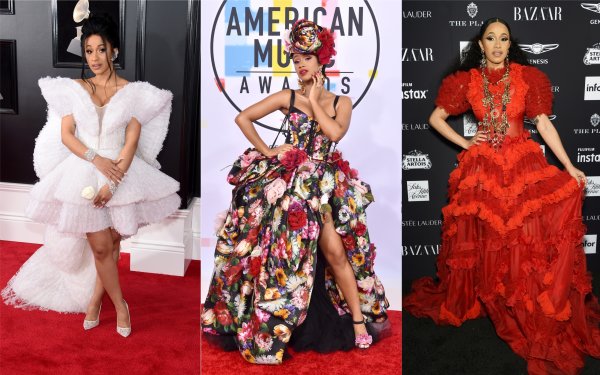 From Balenciaga to Bloody Shoes: All the Times Cardi B's Style Stole the Show
Next Up: Editor's Pick