21 Savage's Immigration Case Has Mobilized the Music Community. Here's Everything to Know

The arrest of rapper 21 Savage by U.S. Immigration and Customs Enforcement (ICE) in Atlanta on Super Bowl Sunday has prompted widespread outrage from the music community as well as immigration advocates and raised many questions.

Attorneys for the rapper, born She’yaa Bin Abraham-Joseph, dispute claims from immigration authorities that he first arrived in the United States as a teenager from the United Kingdom and that he has a felony drug conviction. They spent the last week fighting to get him released as quickly as possible. On Tuesday, his attorneys said Abraham-Joseph was granted a release on bond.

The rapper’s case garnered national attention after his arrest, with a number of stars speaking out in his defense, including fellow musicians Meek Mill, Cardi B, T.I. and Nicki Minaj. Jay-Z, who on Wednesday issued a strong statement condemning Abraham-Joseph’s arrest as a “travesty,” also hired attorney Alex Spiro to help Abraham-Joseph with his case, Spiro confirmed to TIME.

Here’s what to know about Abraham-Joseph’s case:

What happens next for 21 Savage’s immigration case?

In a statement to TIME from Charles H. Kuck, Diana LaPolt and Alex Spiro on behalf of Abraham-Joseph, the rapper’s attorneys confirmed he was granted release on bond on Tuesday.

“For the past 9 long days, we, on behalf of She’yaa Bin Abraham-Joseph, known to the world as 21 Savage, have been speaking with ICE to both clarify his actual legal standing, his eligibility for bond, and provide evidence of his extraordinary contributions to his community and society,” they said. “Today, 21 Savage was granted a release on bond. He won his freedom.”

The attorneys said that in the wake of the Grammy Awards, where Abraham-Joseph was scheduled to perform, they received notice that he was granted an expedited hearing.

“21 Savage asked us to send a special message to his fans and supporters—he says that while he wasn’t present at the Grammy Awards, he was there in spirit and is grateful for the support from around the world and is more than ever, ready to be with his loved ones and continue making music that brings people together,” the attorneys continued in their statement. “He will not forget this ordeal or any of the other fathers, sons, family members, and faceless people, he was locked up with or that remain unjustly incarcerated across the country. And he asks for your hearts and minds to be with them.”

Kuck told TIME that Abraham-Joseph’s release on bond came on Tuesday just after ICE stops taking bond payments for the day at 3 p.m. So, the rapper will continue to be detained until his bond is posted at 8 a.m. Wednesday.

Under a new judge, Abraham-Joseph will be granted a hearing at a date that has not yet been established. Kuck, who said the expedited hearing came as a surprise, said he expects the whole case will take about one to two years to resolve because of a current backlog in immigration cases.

“He is free until the case is resolved,” he said.

According to Kuck, the legal team provided ICE evidence of Abraham-Joseph’s involvement in his local community, such as his charitable work with police and local prosecutors, back-to-school events and monetary donations, including paying for funerals for children killed in gun violence.

“He has a remarkably big heart and is using his influence for good in his own community,” Kuck said. “We provided all the things that show you are not a flight risk nor a danger to the community.”

Previously, Abraham-Joseph’s lawyers said the rapper has a pending U visa application with U.S. Citizenship and Immigration Services, which they said should be enough of a basis to release the rapper from custody. U visas are granted to victims of crimes who are helpful to law enforcement or government officials in the investigation or prosecution of criminal activity, according to USCIS. Abraham-Joseph filed his application in 2017 as a result of being a victim of gun violence in 2013.

The Atlanta Journal-Constitution reports that Abraham-Joseph has had a history with gun violence, including stating publicly that he was banned from the DeKalb County School District after bringing a gun to school when he was in seventh grade. In the years since, Abraham-Joseph, who also lost his younger brother and a friend to fatal shootings, has become a supporter of gun control and launched efforts to reduce gun violence.

“Generally, ICE has recognized a pending facially valid U visa as a basis to delay removal proceedings and release individuals from custody,” the rapper’s lawyers said in the statement.

They also say deportation proceedings for Abraham-Joseph’s began after he was arrested, and that the U.S. Department of Homeland Security has been aware of his address since he applied for the U visa. A USCIS spokesperson said it will neither confirm nor deny whether a person has submitted such applications, citing statutory regulations that prohibit sharing information pertaining to those who have requested protected status.

Why did ICE arrest 21 Savage?

Abraham-Joseph was taken into custody in a “targeted operation,” ICE spokesperson Bryan Cox said Sunday. ICE claimed the rapper came legally to the U.S. in 2005 as a teenager, and continued to stay illegally in the country after his visa expired in July 2006. ICE also said the rapper was convicted on felony drug charges in Oct. 2014 in Fulton County, Ga. Abraham-Joseph’s lawyers dispute that he was ever convicted. Chris Hopper, spokesperson for the Fulton County District Attorney’s office, said in a statement to TIME that the case was sealed under Georgia’s first offender law and that the office “cannot confirm or deny any information about the disposition of the matter.”

Cox said on Sunday that Abraham-Joseph is now in “removal proceedings before the federal immigration courts,” in a statement to media outlets, according to the Atlanta Journal-Constitution. The statement, also obtained by the Washington Post, said, “ICE will now await the outcome of his case before a federal immigration judge to determine future actions.”

Abraham-Joseph was still detained by ICE as of Friday, according to Spiro, who says he is now working with the rapper’s legal team, Kuck Baxter Immigration, which issued a lengthy statement on the rapper’s behalf on Tuesday to refute the agency’s claims.

The law firm in its statement linked Abraham-Joseph’s arrest by ICE to lyrics in his song “A Lot” in which he criticized family separations at the U.S.-Mexico border. “Went through some things, but couldn’t imagine my kids stuck at the border/Flint still need water, n-ggers was innocent, couldn’t get lawyers,” he raps on the track.

“Many have speculated as to possible ulterior motives for his arrest and detention, including that he released music five days prior to his arrest by ICE, which included new lyrics condemning the behavior of immigration officials for their detention of children at the border,” Abraham-Joseph’s lawyers said. “We are unaware of why ICE apparently targeted Mr. Abraham-Joseph, but we will do everything possible to legally seek his release and pursue his available relief in immigration court.”

Asked about the motivations behind Abraham-Joseph’s arrest, Spiro, who was hired as one of the rapper’s representatives on Wednesday, told TIME, “It’s either bad luck and a bureaucratic failing. Some people have suggested it’s part of a more sinister plot. I’m not one to jump to conspiracies.”

A spokesperson for ICE declined to comment on the case.

The law firm representing Abraham-Joseph has said ICE is incorrect in several of its claims in the days following his arrest.

While Abraham-Joseph, who made his name in Atlanta’s influential music scene, has confirmed he was born in the U.K., his representatives say ICE arrested him based upon “incorrect information” regarding an alleged previous criminal conviction. Although they acknowledge Abraham-Joseph had lost his legal status in the United States, the rapper’s attorneys dispute portions of ICE’s statement regarding his arrest.

“He entered the country when he was very young. He lived his formative years here and grew up here,” Spiro tells TIME. “He doesn’t have a conviction because it was vacated. This is, as Jay said, a travesty of justice. We’re going to fight to make sure the right things happen.”

What we know about 21 Savage’s life in the U.S.

In a statement from Kuck Baxter Immigration released on Tuesday, attorneys say Abraham-Joseph came to the U.S. legally at the age of 7. He returned to the U.K. for a one-month visit in 2005 and returned to the States in July 2005 on an H-4 visa, which expired in 2006, according to the statement, leaving Abraham-Joseph without legal status in the U.S.

“Mr. Abraham-Joseph has been continuously physically present in the United States for almost 20 years, except for a brief visit abroad,” attorneys with Kuck Baxter said in the statement. “Unfortunately, in 2006, Mr. Abraham-Joseph’s legal status expired through no fault of his own.”

His lawyers also said that like nearly 2 million young undocumented immigrants, Abraham-Joseph was left without an official immigration status as a young child, and was unable to fix it. “These ‘Dreamers’ come from all walks of life and every ethnicity,” his lawyers said.

The term ‘Dreamers’ is used to describe children of immigrants who were brought to the U.S. without documentation and refers to the temporary Deferred Action for Childhood Arrivals program established in established by the Obama Administration in 2012 that allowed Dreamers to work legally without a fear of deportation. Based on what Abraham-Joseph’s lawyers have said about his visa expiring in 2006, the rapper could have qualified for relief from deportation under the program if he had graduated high school or obtained a GED, or was honorably discharged from the U.S. military. Dreamers under the age of 31 as of 2012, who arrived in the U.S. before their 16th birthday and continuously lived in the U.S. since 2007 were eligible to apply as long as they were not convicted of a felony or significant misdemeanors. Because Abraham-Joseph reportedly said he dropped out of high school, he would not have been eligible.

“Because of his length of residence in the United States and his immediate relatives, Mr. Abraham-Joseph is eligible to seek Cancellation of Removal from an Immigration Judge,” they said.

A person can apply for Cancellation of Removal to avoid being deported if they have maintained a continuous physical presence in the United States for 10 years or more, have been a “person of good moral character,” have not been convicted of an offense and if their leaving would “result in exceptional and extremely unusual hardship to your United States citizen or lawful permanent resident spouse, parent or child,” according to the U.S. Department of Justice.

Abraham-Joseph’s attorneys also say in the statement that ICE’s claim that the rapper was convicted on drug charges in 2014 is incorrect, and that he has no criminal charges or convictions under state or federal law. Spiro added that the rapper was arrested for marijuana possession, but that his case was later sealed and vacated due to a legal problem in the way it was brought forward. 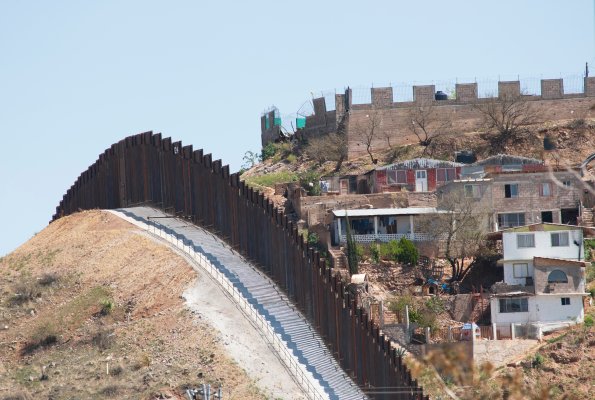 Over $20 Million Raised in Border Wall GoFundMe Campaign to Be Refunded
Next Up: Editor's Pick