Maria Ressa, founder of the Philippines-based news website Rappler, is facing new libel charges — a move widely viewed as part of a crackdown on free press in the country.

Rappler has covered the brutal drug war of Philippine President Rodrigo Duterte, whose approval of extrajudicial killings has alarmed human-rights advocates. Ressa says these and previous criminal charges are attempts at intimidation for their reporting.

The new charges pertain to a 2012 story about businessman Wilfredo Keng and his alleged links to illegal drugs and human trafficking, as well as his ties to the country’s then-chief justice during his impeachment trial. The National Bureau of Investigation dismissed Keng’s complaint about the story in 2018, but Department of Justice prosecutors later ruled in his favor, Rappler reported.

“I look at it as proxy. It is part of the same government effort to try to make Rappler toe the line, which is, ‘You shouldn’t be reporting on the drug war. You should be reporting how wonderful our country is today.’ It is just not what we do,” Ressa tells TIME. “I want to face this — because the more ludicrous the cases are, the clearer it is that these are tools that are being used to try to silence us.”

The story in question was published by Rappler in May 2012. The controversial Cybercrime Prevention Act law — which made online libel a crime punishable by up to 12 years in jail — was enacted months later in September 2012, prompting protests amid fears it would lead to censorship.

In a statement, Rappler’s lawyer warned that the case could set a “dangerous precedent” of applying laws retroactively.

“In this instance, the anti-cybercrime law has clearly been weaponized against legitimate dissent and free speech,” Amnesty International said in a statement on Wednesday, calling the charges against Rappler an “absurd legal attack” that came as “no surprise.”

2018: The Guardians
Photographs by Moises Saman-Magnum Photos for TIME

“The government shows no sign of ending its chilling campaign of repression, obstruction and intimidation. Authorities should end this harassment and let Maria Ressa and all Filipino journalists do their jobs as truth-tellers.”

Reporters Without Borders also condemned the latest charges as “absurd” in a statement posted on its website.

The Committee to Protect Journalists has raised concerns about “a direct assault on press freedom in the Philippines.” Rappler has been banned from covering presidential events, and Duterte has dismissed the site as “fake news.”

Ressa appeared on one of the covers of TIME’s 2018 Person of the Year issue in December. Ressa, along with three other journalists and one news organization, were named Person of the Year “for taking great risks in pursuit of greater truths, for the imperfect but essential quest for facts that are central to civil discourse.”

Ressa and Rappler were also charged with tax evasion in November. She is currently out on bail on those charges, but she faces up to 10 years in prison if convicted.

Ressa says she and her colleagues have approached the charges with a bit of “gallows humor.”

“But I find it unbelievable that as a journalist sticking to the standards and ethics that we have always abided by — and just for doing our jobs — that I have to think about this,” she says.

“Rappler, as a news organization, we’re small in the big scheme picture, but we’re committed. So that’s good. I’m happy with where we are. And if thinking about a potential jail term is part of that, then okay. I still have faith.”

During a press conference on Monday a spokesperson for Duterte denied that the tax evasion charges against Rappler were politically motivated, CNN reported.

Ressa has been outspoken about how disinformation on social media and authoritarian governments are negatively affecting journalism in the Philippines and elsewhere around the world. 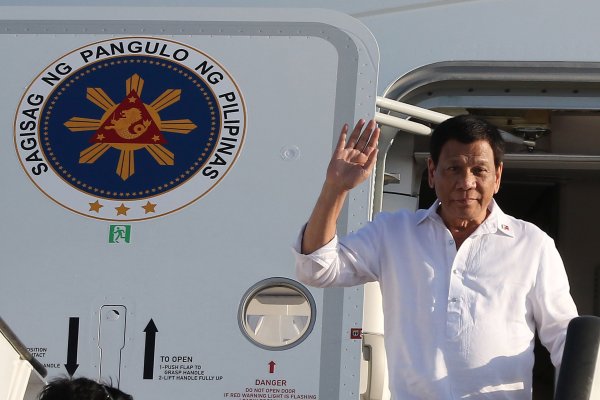 Duterte Takes to Facebook Live to Dispel Rumors of His Death
Next Up: Editor's Pick