The 'Green New Deal' Was Unveiled Thursday. But Parts of It Are Already Underway

Workers in Oregon paid by the federal government to make homes more energy efficient. Union members in California, Massachusetts and New Jersey teaching “green skills” to workers. A city in Colorado working toward powering itself with 100% clean energy to attract jobs.

These are the kinds of projects that progressive backers of a Green New Deal promise to create to fight climate change.

But while the sweeping first draft of the plan unveiled Thursday included ambitious goals like eliminating the U.S. carbon footprint by 2030, some of the smaller ideas that backers would say would help it achieve those goals are already being implemented around the country.

Environmentalists say that the resolution put forward by freshman Rep. Alexandria Ocasio-Cortez and veteran Sen. Ed Markey is a high-level view of the goals they’re setting, but they note that many of the individual ideas in it can be achieved on their own by mayors, governors and the stroke of a future Democratic president’s pen. Some ideas might even pass the current Congress, they argue.

“We’re trying to define a future, a society and a country that we want to create,” says Greg Carlock, a researcher who authored a report on the Green New Deal for the progressive group Data for Progress. “That is a lot of legislative work. That is a lot of new promulgation of regulation. And that is also a lot of work at the state and local level.”

In recent months, the Green New Deal has gone from a slogan to an idea rapidly gaining currency on the left. Backers hope that by putting concrete ideas forward now, they can get the growing Democratic field of presidential candidates to throw its support behind it, building momentum for a big legislative push if Trump loses re-election.

The scale of this proposed Green New Deal is new, but some of the ideas in it have a long and surprisingly bipartisan history. In 2007, President George W. Bush signed the Green Jobs Act, funding a slew of green jobs training programs across the country as part of big energy package. On the campaign trail the following year, both John McCain and Barack Obama expressed their support for green jobs. And when the recession hit, the federal government deployed billions more to invest in everything from clean energy research and development to rapidly creating green jobs.

Officials at the state and local level have taken similar action. A cap-and-trade program in California has provided billions in funding for everything from high-speed rail to green infrastructure, helping make the state a green leader. And more than 100 mayors across the country have expressed support for local versions of the zero-emissions targets embedded in the resolution unveiled Thursday.

Still, even with the past successes, skepticism over that proposal — more of an agenda-setting document than a comprehensive plan — remains deep on both sides of the aisle.

The Green New Deal resolution put forward on Thursday includes a wide range of planks from big-picture goals like net-zero carbon emissions in the U.S. by 2030, fixing the country’s infrastructure and providing all Americans with access to health care, and it’s hard to imagine Congress agreeing to all of its provisions. Indeed, Republicans have branded the Green New Deal as radical while many mainstream Democrats have praised the enthusiasm while dismissing it as naive. “The green dream, or whatever they call it, nobody knows what it is, but they’re for it, right?” said Speaker of the House Nancy Pelosi on Thursday.

Supporters say they are optimistic not naive and hope that a big and splashy legislative package will become law in the early days of a new president’s term. Still, some say, some of the more palatable legislative proposals may make their way through Congress in separate legislation, perhaps even before a new president takes office.

“There’s going to be different members who are going to grab a small piece of that and push out a bill,” says Carlock. “It’s going to be good common- sense drinking water infrastructure, or zero-waste stuff, or sustainable farming to make farming affordable.”

That’s a step toward meeting some of the ambitions of a Green New Deal, but it leaves a gap, particularly when it comes to eliminating greenhouse gas emissions and fixing some of society’s most pressing social ills. To do that, piecemeal efforts will not be enough.

“Policies have to be introduced immediately at the federal level,” says Vien Truong, the president of Green for All, a progressive group that supports a Green New Deal. “We have to start calling people to the mat — are they in or are they out? Are they going to be for actually beginning to address this with the level of urgency that we need or are they going to stand there on the sidelines and literally watch the tides roll in?”

The Green New Deal still has a ways to go, legislatively. But even as it began those first steps, parts of it are already in place. 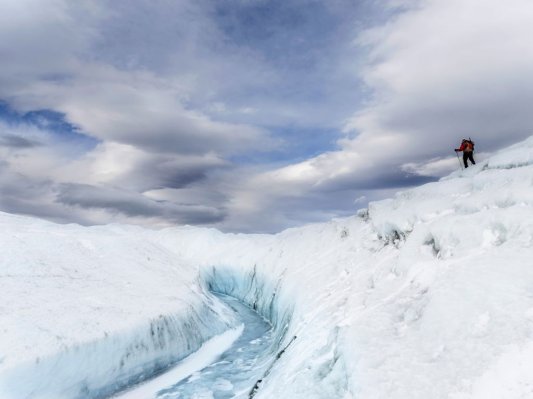 Greenland's Ice Melt Has Reached a 'Tipping Point': Study
Next Up: Editor's Pick