In a rare moment of unity during Tuesday night’s State of the Union address, the House chamber broke out into a short rendition of “Happy Birthday” to honor Judah Samet, a Holocaust survivor who also escaped death during the shooting at the Tree of Life synagogue in Pittsburgh last fall.

President Donald Trump mentioned Samet, along with Pittsburgh Police Officer Timothy Matson, during his speech as he talked about standing up to anti-Semitism.

It was Samet’s 81st birthday on Tuesday, and he gave a big smile and called out “thank you” after lawmakers sang to him.

“They wouldn’t do that for me, Judah,” the President said, laughing.

Samet survived Germany’s Bergen Belsen concentration camp more than 70 years ago. His family boarded a train to another concentration camp, but they were liberated by American troops before they reached that destination.

Last fall, Samet narrowly survived again when he arrived a few minutes late to Saturday morning services at his synagogue in Pittsburgh. He pulled into the parking lot of the Tree of Life synagogue, the Washington Post reported at the time, and a man told him there was an active shooting going on inside.

Trump praised Samet on Tuesday and issued a noticeably sharp condemnation of anti-Semitism.

“We must never ignore the vile poison of anti-Semitism or those who spread its venomous creed,” the President said. “With one voice, we must confront this hatred anywhere and everywhere it occurs.”

While Trump has been very supportive of the Israeli government, he has often been criticized in the past for not calling out anti-Semitism and other bigotry when it occurs.

After the white nationalist rally in Charlottesville in 2017, many people rebuked the President for initially failing to condemn the white nationalists and then for blaming “both sides.” The Trump Administration also stirred controversy when it omitted Jews from its statement about International Holocaust Remembrance Day that year. 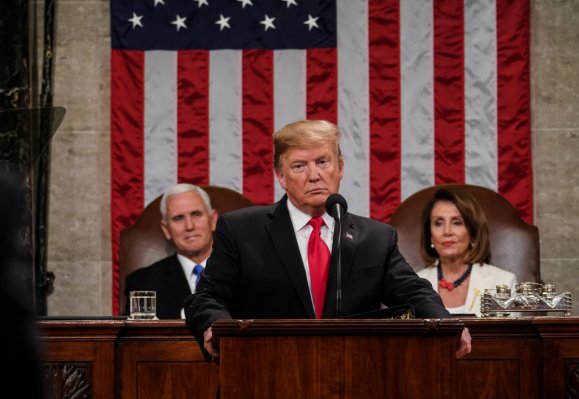 President Trump Used the State of the Union to Call for an End to Investigations. So Did Nixon
Next Up: Editor's Pick