A grisly shooting on a Queens subway platform that was caught on tape is connected to the MS-13 gang, NYPD officials confirmed.

On Monday, police announced 26-year-old Ramiro Gutierrez was arrested for the fatal shooting of 20-year-old Abel Mosso. Gutierrez has been charged with murder, gang assault and criminal possession of a weapon, an NYPD spokesman confirmed to TIME.

Cell phone footage of the incident went viral, and according to NYPD Chief of Detectives Dermot Shae, the entire incident, beginning with the confrontation that began on a subway train, was caught on tape.

Shae told reporters Monday that witnesses overheard MS-13 mentioned during the skirmish, which spilled onto a Jackson Heights subway platform. There, police say the altercation turned physical. Footage shows three men wrestling on the ground while a crowd forms around them, with some passengers trying to break up the fight.

Gutierrez is recorded getting up from the ground and pulling out a gun. Six shots can then be heard along with screams as subway passengers run in fear.

According to Shae, Mosso was shot multiple times in the face, succumbing to his injuries. Shae also said Mosso was affiliated with the 18th Street gang, which has a “historical beef” with MS-13.

Shae said that Gutierrez, a known MS-13 gang member, was arrested less than 24 hours after the shooting and that the investigation is still ongoing. Police are still searching for two other people in connection to the shooting.

President Trump has often referenced MS-13 as a serious threat and called members of the street gang “animals.”

According to the FBI, the gang is primarily made up of El Salvadorians, but also include Hondurans, Guatemalans, Mexicans, and other Central and South American immigrants. Shae said NYPD has been cracking down on the gang, which has a large presence in Long Island.

In December, five members were arrested for a fatal shooting in Queens. 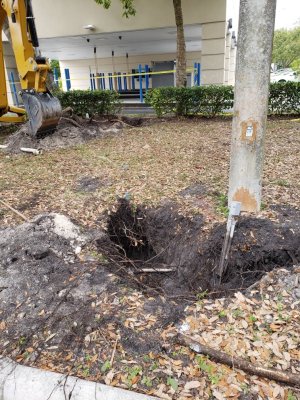 A Sinkhole in Florida Revealed a Tunnel That Someone Was Digging to a Nearby Bank
Next Up: Editor's Pick