The day Behrouz Boochani arrived on the South Pacific island where he has been detained for nearly six years, a blackened tooth fell from his mouth. To the Iranian Kurdish refugee, it seemed like the latest bad omen after his attempted sea route to Australia ended in lock up at the Manus Island Detention Center.

“Is there some connection between my damn tooth falling out and the life I will lead on Manus Island,” Boochani asks in his book, No Friend but the Mountains: Writing From Manus Prison. The 400-page memoir charts Boochani’s flight from Iran to his incarceration in one of Australia’s offshore facilities, documenting the many humiliations of the refugee experience along the way: from cage-like holding cells, to the absence of sanitation.

Last month, the book earned one of Australia’s most prestigious literary honors, the 100,000 Australian dollar ($72,390) Victorian Prize for Literature. But Boochani, who is barred from entering Australia, could not collect his award.

Simply writing the book itself was a feat. Composed via WhatsApp text messages, it was strung together amid the looming fear that guards might confiscate Boochani’s phone at any moment.

The 35-year-old, who has emerged as a vocal critic of hardline immigration policies practiced in Australia and elsewhere, spoke with TIME by phone from Manus Island, where is he being held in a new facility after the previous detention center was deemed unconstitutional and permanently shut in 2017.

How do you feel about being honored with this award?

It is a very paradoxical feeling. We [refugees on this island] have had long journeys and we have been on Manus Island for the past five years. So when I see people in pain and suffering, I cannot think of myself and celebrate this award.

[At the same time] it is a huge recognition for all of the refugees around the world who are victims of fascist systems. I think that’s why it is a huge achievement because we used the power of the written word to challenge this system, this policy.

Refugee advocates protest against the relocation of asylum-seekers amid the closing of camps in Papua New Guinea in Sydney, Australia on Oct. 31, 2017.
Saeed Khan—AFP/Getty Images

In Iran, you were a journalist. Do you see your book as a continuation of that work?

How did you manage to write a book on WhatsApp?

I got used to writing on WhatsApp over the past five years. I also shot a movie, Chauka, Please Tell Us the Time, using my phone and sent it over WhatsApp. That movie ended up recognized by international film festivals.

WhatsApp is my office. People may think it is impossible to use WhatsApp for work, but for me, it is completely normal.

Were you scared about the repercussions that you would face for documenting and publishing your story?

Of course. Being scared is a part of the job that I have done on Manus Island. And that’s why I didn’t work under my real name for two years. It is natural to feel scared, but that fear was not strong enough to prevent me from writing.

With the refugee crisis spiraling across the globe, what message would you give to millions of people about to undertake perilous journeys like yours?

I want to encourage them to share their stories and talk about their journeys. I don’t mean to say everyone should write a book. But people should not be scared of sharing their stories.

How do you respond to claims by the Australian government that people on Manus Island are economic migrants rather than refugees?

If I could go back [to Iran], I wouldn’t stay here. This system humiliates me. But I have no choice.

What are your hopes for the future?

The closure of this camp and freedom from this prison. 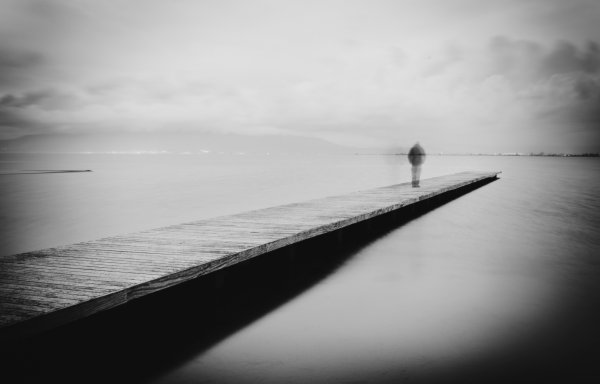 Global Suicides Have Declined by a Third Since 1990
Next Up: Editor's Pick