Anything can happen during a presidential speech, and President Donald Trump’s 2019 State of the Union address to Congress on Tuesday night was no exception when his crooked tie quickly became a viral punchline.

He urged his listeners to “choose greatness,” but folks at home couldn’t resist to choose jokes about the tie.

Before Trump uttered a word from his podium at the joint session of Congress, his necktie was all the material online jokesters needed, and users from the New York Times fashion critic Vanessa Friedman to others couldn’t resist taking their shots.

Instead of jokes about his political positions, it was the tie’s position that appeared to be a key talking point of the evening.

See a sampling of the reactions below.

His tie has consistently been an object of fascination, spurring strong reactions when he taped it and often for its length.

Trump was of course not the only politician to get a taste of the internet’s humor lately.

Twitter immediately moved in with a harsh meme offensive joking about them awkwardly sharing one podium. Another take? The pair looked like two disappointed parents in the eyes of those watching.

And the big joke of the 2018 State of the Union address was about Trump punctuated his speech with his own applause that a nearby microphone amplified. 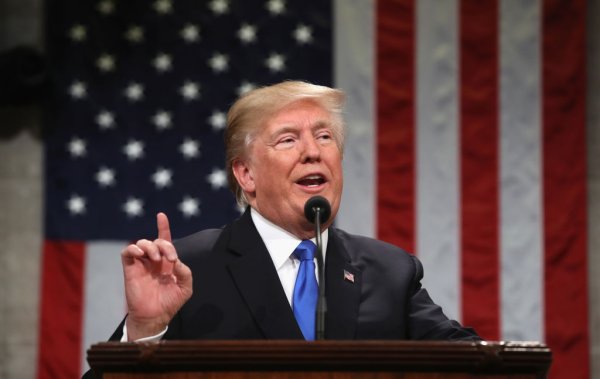 President Trump Will Not Declare a National Emergency During the State of the Union: Report
Next Up: Editor's Pick