“For those who believe in the news that I passed away, then I request of you, please pray for the eternal repose of my soul,” Duterte said in a Facebook Live post on Sunday, via the account of his common-law wife Honeylet Avancena. The video was shared by Philippine media outlets on their Twitter accounts.

Avancena posted the video of the 73-year-old leader at a table, as the two of them discussed a newspaper article while he ate some snacks. The rare social media appearance outside of his official functions came after he skipped an event on Friday because he wasn’t feeling well.

The president’s health has been the subject of public interest after he underwent medical tests in October with samples taken from his intestines yielding negative results. He previously said he would step down if diagnosed with a serious illness, but expressed reservations about being replaced by Vice President Leni Robredo, who leads the opposition.

“The assumption, of course, is that he is still capable of doing his job,” Ramon Casiple, executive director at Manila-based Institute for Political and Electoral Reforms, said of Duterte.

Critics “cannot accept the fact that we have a president who, not only is unstoppable in changing the landscape and culture of politics in this country as well as putting an end to the drug menace, corruption, criminality and rebellion, but who appears to be indestructible and apparently immune from serious illness,” Panelo said. 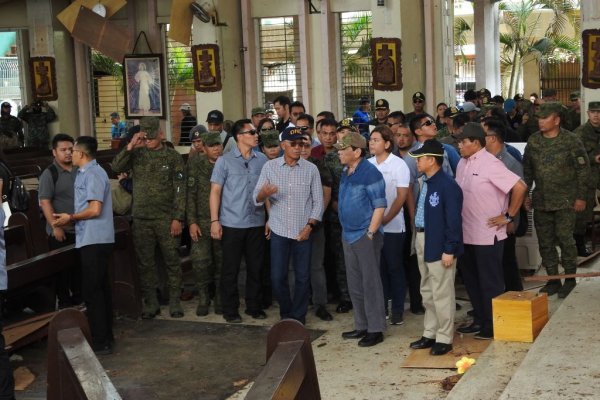 Grenade Attack Kills Two at a Mosque in the Philippines
Next Up: Editor's Pick