Adam Levine may not have been fully clothed for the 2019 Super Bowl halftime show’s entirety.

But it was his garment – specifically a recognizable pattern – that spread across the internet on the wings of laughter.

Some nights mark the dawn of a new era in fashion — and Sunday night was that night. Welcome to “Levine-esque” – a mosaic-like pattern of interlocking squared designs.

It’s a look he debuted as he belted out his hits to millions. And people quickly discovered that they had pillows, curtains and other home goods that matched the Maroon 5 halftime show headliner. Evidence was produced.

We only hope the trend spreads as quickly as it spread across Twitter: Everyone can own a piece of the Super Bowl 53 halftime show now. No tickets necessary. Just a trip to Target or any home goods store will do it.

See the best tweets about all the furniture that matched Adam Levine’s Maroon 5 Super Bowl Halftime show look below.

And some just believed his top half called to mind a Chiptole bag so vividly that the resemblance was too good to pass up. 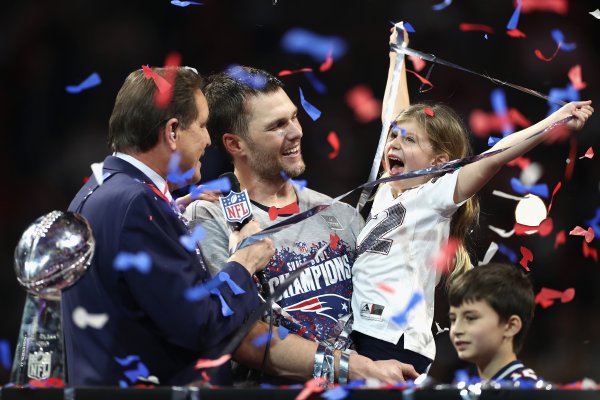 Tom Brady's Triumphantly Energetic Daughter Playing With Confetti Made the Super Bowl Postgame Show Worth Watching
Next Up: Editor's Pick