In the midst of the ongoing controversy over a racist photograph on Virginia Gov. Ralph Northam’s medical school yearbook page, a photograph of Senate Majority Leader Mitch McConnell (R-KY) posing in front of a Confederate flag is making the rounds on social media.

The photograph of McConnell, which apparently shows the senator posing in front of a large Confederate flag, had previously surfaced in 2015, according to Snopes. The photo was allegedly taken at a Sons of Confederate Veterans event in the early ’90s.

Following the revelation of the racist yearbook photograph, Democratic Gov. Northam has refused to step down despite facing mounting pressure to resign. The photograph in question shows one person apparently wearing blackface posing with a person dressed in KKK robes. The governor initially apologized on Friday for appearing in the photo, before denying that he was either figure in the photograph in a news conference on Saturday.

The photograph of McConnell has regained traction on social media in the past few days, in part spurned on by the controversy over Northam’s photograph. Some users on Twitter cited the photograph as an example of Republican hypocrisy in condemning the Democratic governor’s alleged photograph while apparently being soft on racism within their own party.

“This picture gets ‘attention on social media’ frequently,” McConnell spokesman David Popp said in a statement to TIME. “The left trots it out every time Sen. McConnell speaks out on race or the Confederate flag–as he did on Charlottesville, the Confederate flag over SC’s capitol, removing Jefferson Davis from the Kentucky capitol, his comments on Steve King and so on. They’ve been doing this for many, many years.”

Popp also stated that the picture was apparently from a Sons of Confederate Veterans event “30 years ago or so.” 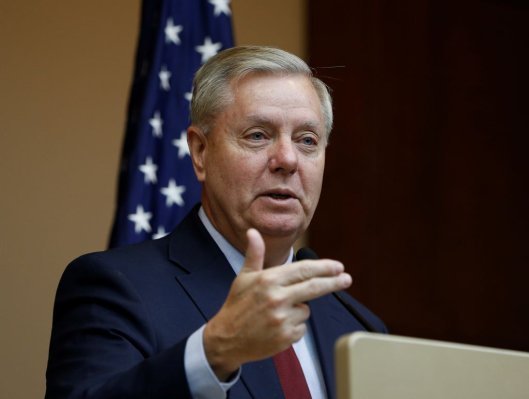 Graham: Shutdown Could End 'in a Couple of Weeks'
Next Up: Editor's Pick