(Bloomberg) — The embattled Nicolas Maduro regime halted plans to ship 20 tons of Venezuelan gold overseas as a growing international push to ring-fence the country’s dwindling hard assets unnerved those handling the transaction, according to a person with direct knowledge of the matter.

The gold bars, which are worth about $850 million, had been weighed and separated in the central bank’s vaults for transportation, but will not be sent out anytime soon, the person said. The bank has suddenly transformed into a microcosm of the crisis: Some staffers, fearful of getting ensnared in U.S. sanctions and worn down by the crippling economic collapse, have begun to disregard orders, prompting senior managers loyal to Maduro to oust them.

The blocking of the 20-ton shipment comes just a week after the Bank of England denied Maduro’s request to withdraw $1.2 billion of gold stored there. While the destination of the gold and the nature of the transactions aren’t known with certainty, it’s unusual for a government to be shipping around such massive amounts. And the U.S. officials who are leading the push to have the authoritarian ruler cede power to a transitional government contend that the thwarted deals form part of his regime’s bid to ransack the country in its final days in power.

The U.S. is working to ensure that the “benefits of Venezuela’s resources are not pilfered by Maduro and his cronies,” National Security Adviser John Bolton said in a tweet this week.

The gold held in Caracas and London is an important source of wealth for a nation that has plunged into extreme poverty under Maduro’s socialist rule. The central bank’s foreign reserves, including the gold, are down to a mere $8 billion. Those assets form a key part of the battle for control of Venezuela’s finances between Maduro and Juan Guaido, the National Assembly leader who is trying to install the transitional government with the support of the U.S. and other countries.

On Thursday, Marco Rubio, the Florida senator who is helping spearhead the U.S.’s hard-line stance toward Maduro, fired off a tweet calling out the United Arab Emirates’ Noor Capital as the financial firm orchestrating the gold transaction with Venezuelan authorities. Rubio went on to warn the firm that both it and any airline it hires to take the gold away will be subject to the sanctions that the U.S. government has been stepping up in recent days.

Noor Capital said in a statement on its website that it “does not engage in any illegal or prohibited transactions” and is refraining from conducting business with Venezuela until the situation “stabilizes.” The firm said it bought — legally — three tons of gold from the central bank last week but hasn’t made any purchases since.

A cargo plane operated by E-Cargo, a Moscow-based company, landed at Caracas international airport on Jan. 30, fueling speculation it was the plane that would cart off the gold. It arrived after leaving Moscow on Jan. 29 and stopping in Dubai, Casablanca and Cape Verde, according to flightradar24.com data. It departed Caracas Friday afternoon.

Meanwhile, in Florida, Rubio was warning companies and governments again to stay away from the Maduro regime, which has been propped up financially in recent years by Turkey, China and Russia.

“Think about it very carefully,” Rubio said in a speech outside Miami. “The law is clear. You will face severe sanctions if you allow Nicolas Maduro to steal the gold that doesn’t belong to him, but to the people of that great country.”

Guaido, who declared himself interim president last week, has spoken at great length about his team’s push to safeguard Venezuela’s assets so that they can be used to fund the flow of humanitarian aid into the crisis-torn nation.

He has scored several key victories in recent days on this front, helping bolster his bid to assume control of the country. The Trump administration imposed fresh sanctions on the national oil company PDVSA, effectively blocking Maduro from exporting crude to the U.S., and granted Guaido control of Venezuelan assets at the Federal Reserve Bank of New York. And the Bank of England’s decision last week came after top U.S. officials, including Bolton and Secretary of State Michael Pompeo, lobbied their U.K. counterparts to help cut off the regime from its overseas assets.

“The English stole the gold in the Bank of England,” Diosdado Cabello, the powerful No. 2 in Maduro’s socialist party, said in a speech broadcast on state television this week. “The imperialist bosses should know that we will never give up.”

Gold has made up a unusually large chunk of Venezuela’s foreign reserves for years. Hugo Chavez, the predecessor and mentor to Maduro, plowed much of the country’s oil wealth into gold in part because of his disdain for the U.S. dollar. In 2011, Chavez ordered the repatriation of $11 billion worth of gold bars from the Bank of England and other foreign institutions. As Venezuela fell deeper into economic crisis years later, though, Maduro began selling them off to raise the cash he desperately needed for imports and to try, unsuccessfully, to avoid defaulting on the country’s foreign debt. 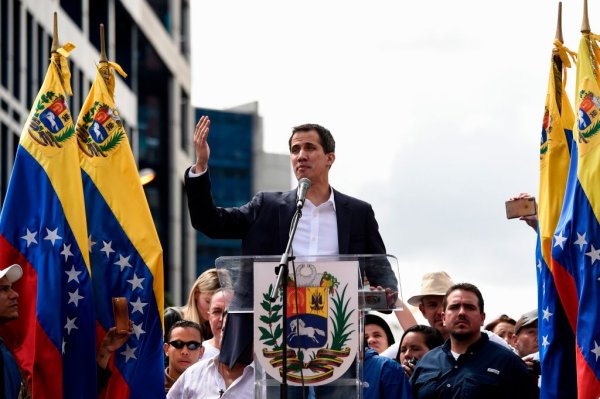 Juan Guaido: How Venezuela Can Restore Democracy
Next Up: Editor's Pick