'Together, America, We Will Rise.' Cory Booker Launches 2020 Campaign

Sen. Cory Booker is adding another line to his resume: presidential candidate.

With an early morning tweet and an email to his supporters, the New Jersey Democrat made official his White House ambitions.

“It is not a matter of ‘Can we?’ It’s a matter of do we have the collective will, the American will? I believe we do,” Booker says in his introductory video. “Together, we will channel our common pain back into our common purpose. Together, America, we will rise.”

Minutes after that note went out, he was scheduled to do a round of phone interviews, starting with the Tom Joyner Morning Show, the syndicated staple that is the top show with urban audiences. Booker was then scheduled to phone Univision’s Despierta America, a Spanish-language program, and speak with The Black Eagle’s Joe Madison, a host and civil rights activist, on SiriusXM’s Urban View channel. His first television interview will take place Friday on ABC’s The View.

Taken together, the media bookings speak to how he — like many of his declared and potential Democratic rivals — sees a pathway to the nomination: with the support of African Americans, Hispanics and women. But he’s not alone in this view of the campaign that lies ahead. For instance, Sen. Kamala Harris, who is African-American, announced her candidacy on ABC’s Good Morning America on Martin Luther King Jr. Day. She is basing her campaign in Baltimore and made her first campaign rally in Oakland, Calif.

This approach may work on a macro, national level but could hit speedbumps early on. Iowa, which has scheduled its lead-off caucuses for Feb. 1, 2020 — now exactly one year away — and New Hampshire’s lead-off primary are hardly bastions of diversity. That’s why some potential candidates like Sen. Sherrod Brown, who is in Iowa and heading to New Hampshire, see a path for a white man from the Midwest. Or why, three days after announcing her campaign on Stephen Colbert’s program, Sen. Kirsten Gillibrand of New York was on the ground in Iowa. Sen. Elizabeth Warren of Massachusetts, who announced on Dec. 30 that she was forming an exploratory committee, has also been making the early-state rounds.

All that helps explain why Booker felt necessary to enter early and start making visits of his own to those same leadoff states. His advisers said he would be campaigning in Iowa on Feb. 8 and 9, and in South Carolina Feb. 10 and 11. President’s Day weekend will take him to New Hampshire.

The field is expected to be the most diverse in history and could be the largest. That, in turn, could complicate matters. Already, there are discussions about having Democratic debates on back-to-back nights to accommodate the potentially unwieldy field. Donors say would-be candidates are already burning up cell phone minutes with pitches for their candidacies.

But a handful of candidates stand ready to be introduced to the country as a potential President, and Booker, at age 49, has proven himself a media-savvy lawmaker. His unsuccessful first race for Newark mayor, in 2002, was documented in the documentary “Street Fight.” Four years later, he won the seat and used his perch to highlight the challenges of America’s urban core and the city’s turnaround. He leveraged his celebrity friendships to fund Newark’s struggling schools. His philanthropic footprint topped $400 million by the time he left the mayor’s office in 2013, when he was appointed to the Senate. Booker didn’t shed his social media presence and instead became a model for his new colleagues, to varying degrees of success and authenticity. He was elected to his first full term the following year.

Booker, who counts Stanford, Yale and Oxford universities among his degrees, has a largely liberal voting record but sought to create bipartisan opportunities from the start of his term in the Senate. For instance, he has worked with Sens. Rand Paul of Kentucky and Tim Scott of South Carolina on criminal justice reforms and is friendly with Sen. Ted Cruz of Texas. In 2012, he said his party’s attacks on GOP nominee Mitt Romney’s business record was “nauseating.” (New Jersey is home to many Wall Street executives, but liberals simply added it to their list of reasons to distrust Booker as too cozy with big business.)

That’s not to say Booker is a squish. He took extraordinary steps to block then-Sen. Jeff Sessions’ nomination to become Attorney General, testifying against his then-colleague to the Judiciary Committee. He voted against 16 of Donald Trump’s 19 initial Cabinet picks. And he went rogue during the hearings for Supreme Court nominee Brett Kavanaugh, releasing a document that Republicans had sought to keep confidential. Facing the threat of expulsion from the Senate for the release, Booker joked he was having a “Spartacus moment.”

The unknown for Booker is whether can build a sufficient and durable coalition of activists and donors to sway voters in the right places. To that end, his advisers point to a record of fighting big, unwinnable battles and then winning. For instance, in 1998, the then-29-year-old Booker beat a four-term incumbent to win a seat on Newark’s city council. More recently, he led the first major rewrite of the nation’s criminal code in a generation and worked with partners persuaded the Trump Administration to back it.

Booker’s advisers also expect the campaign to talk extensively about his family story: Booker’s father grew up poor in North Carolina, and his church passed a collection plate to send the elder Booker to college. Booker also plans to tell voters about his family facing housing discrimination, a potentially useful tale that can connect with voters who also feel the system is unfair.

But, these advisers caution, don’t expect Booker to run as an aggrieved candidate. They point to an optimism that is a through-line of his career in politics, including two well-received speeches at Democrats’ nominating conventions that drew comparisons to Barack Obama. Just a few weeks ago, as he was in South Carolina for Martin Luther King Jr. Day events, he sounded a bell of comity. “I’ve come to learn in this country that we have a common pain, but we seem to have lost a sense of common purpose,” Booker said. “We need each other. We must awaken a more courageous empathy.”

Booker is about to test if that can be a winning message for 2020. 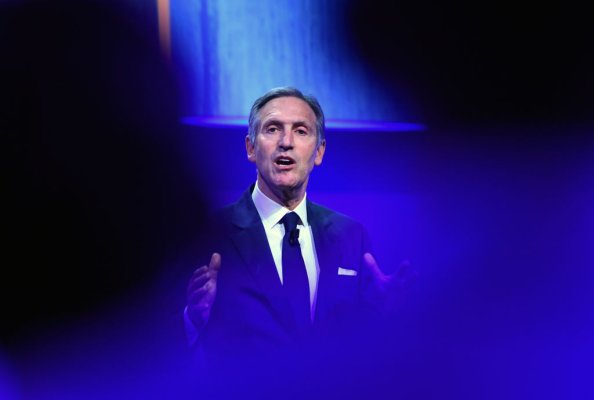 Will Howard Schultz Hurt or Help Trump?
Next Up: Editor's Pick