Grenade Attack Kills Two at a Mosque in the Southern Philippines

A grenade attack on a mosque in the southern Philippines early Wednesday killed two people and wounded four others just days after a deadly church bombing, Reuters reports.

The mosque attack occurred shortly after midnight in Zamboanga, a predominantly Christian province in the restive Mindanao region. Zamboanga sits just northeast of the Muslim-majority archipelago where the twin cathedral bombings killed at least 20 people.

Regional task force commander Colonel Leonel Nicolas told Reuters the grenade incident was “not a retaliatory act”. In an effort to halt the spread of misinformation, military officials urged the public not to speculate about the incidents on social media.

The attack came hours after Philippine President Rodrigo Duterte addressed the cathedral bombing on TV. He said that the attack on Jolo Island, a militia hotbed, may have been a suicide bombing.

His remarks contradicted what security officials have said, according to Reuters, but were consistent with the account provided by the Islamic State, which claimed responsibility for the attack. If confirmed, it would be one of the first known cases of a suicide attack in the Philippines, Reuters reports.

The spate of attacks follows a peaceful January 21 referendum favoring autonomy for the Muslim-majority regions of Mindanao. The a referendum aims to end decades of violence that has left at least 120,000 dead, according to Reuters.

While the region has long been plagued by separatist struggles, sectarian violence there is rare, Reuters reports.

The Ulama Council of Zamboanga Peninsula condemned Wednesday’s attack as a “devilish, irrational and inhumane act.” 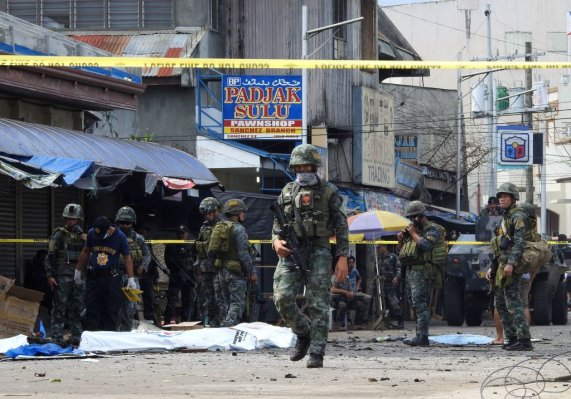 IS Claims Responsibility for Philippines Church Bombing
Next Up: Editor's Pick