Everything You Need to Know About the 2019 Grammys

The 61st Annual Grammys return to Los Angeles this year for music’s biggest night. The 2019 Grammys brings the awards show back to the West Coast after the event was held in New York City in 2018. The night will feature performances from a diverse group of artists, including Cardi B and Miley Cyrus, and sees a rather significant change from previous years as the Recording Academy expands the number of nominees in the main categories from five to eight. This year’s ceremony will be hosted by Alicia Keys, who has won 15 Grammys since her debut album was released in 2001.

When are the Grammys happening?

The 2019 Grammys will take place at Los Angeles’ Staples Center on Sunday, Feb. 10. The live awards will air at 8 p.m. ET / 5 p.m. PT on CBS. (The bulk of the 84 awards are actually not televised, sparing viewers a marathon broadcast.)

How can I watch or stream this year’s show?

The Grammys will air on CBS at 8 p.m. ET / 5 p.m. PT on Sunday, Feb. 10. If you’re a cord-cutter, there’s always CBS All Access, the online streaming package that the network offers for a small monthly fee and a free first week. If that’s not your cup of tea, YouTubeTV will also be streaming the Grammys live across platforms. (That’s $40 a month, with the first five days free.)

Buckle up for a starry night: the Recording Academy has confirmed performances by Cardi B, Camila Cabello, Shawn Mendes, country duo Dan + Shay, Janelle Monáe, Kacey Musgraves, Miley Cyrus, Brandi Carlile and Best New Artist nominee H.E.R. As for the time-honored tradition of a mashup of an old-school favorite band with a newer artist? That honor will go to a combined performance featuring the Red Hot Chili Peppers and Post Malone.

Alicia Keys will host this year’s Grammys. This is the first time that Keys — who became famous in the early 2000s for soulful R&B hits like “Fallin'” — will host a primetime awards show. But she has plenty of Grammy history, having won 15 of the show’s prizes over her career.

Who is nominated for Grammys?

This year, nominations were led almost entirely by rap and rap-adjacent artists. Kendrick Lamar comes in on top with eight nominations, thanks to his work on the Black Panther soundtrack. Drake has seven, followed by Americana singer-songwriter Brandi Carlile and producer Boi-1da, each of whom has six. A large group of artists — including Cardi B, Lady Gaga, Childish Gambino and Maren Morris — scored five nominations apiece. The eligibility period for nominations was Oct. 1, 2017 to Sept. 30, 2018, so if you don’t see your favorite album included, it might just be too recent to qualify.

The nominees for Record of the Year include Cardi B, Brandi Carlile, Childish Gambino, Drake, Lady Gaga and Bradley Cooper, Kendrick Lamar, Post Malone, and Zedd and Maren Morris. The Album of the Year options mostly mirror that category, with the addition of Kacey Musgraves for Golden Hour, Janelle Monáe for her funk-R&B album Dirty Computer and newcomer H.E.R. for her self-titled album. Meanwhile, Song of the Year swaps in Shawn Mendes (for “In My Blood”) and Ella Mai (for sleeper summer hit “Boo’d Up”).

As for Best New Artist, it’s down to Beyoncé protégés Chloe x Halle, rock band Greta Van Fleet, country singer Luke Combs, R&B enigma H.E.R., pop star Dua Lipa, country singer Margo Price, pop singer Bebe Rexha and soulful crooner Jorja Smith. The Best New Artist category has always had complicated eligibility rules; technically, the Recording Academy recognizes artists who “must have achieved a breakthrough into the public consciousness and impacted the musical landscape during the year’s eligibility period.” That’s open to interpretation, but cuts out some artists who released an album in the eligibility period but may have had hit singles come out previously, like Cardi B.

And who is Brandi Carlile?

The biggest nomination surprise may have been Americana artist Brandi Carlile, whose music ranges from emotive acoustic ballads to foot-stomping folk tunes. Her album By the Way, I Forgive You and single “The Joke” were nominated across all the major categories, as well as in Americana and American Roots categories. Originally from Washington state, Carlile has been a working musician for over two decades and has released seven albums. Her debut, 2005’s self-titled project, stirred up critical acclaim; her ensuing release The Story made its way onto the Billboard 200 album chart, as did each following album. But it’s 2018’s By the Way, I Forgive You, with production assistance from notable collaborator Dave Cobb, that’s found her in the center of the Grammys spotlight.

Were there any major snubs?

Taylor Swift released her commercial blockbuster Reputation in November 2010 but only came away with one nomination, in a pop genre category, for her album. (In 2018, she got one nomination for that album’s lead single, “Look What You Made Me Do,” which came out during the previous year’s Grammys eligibility period.) Swift has taken home two prior Album of the Year Grammys, making her a bona fide Recording Academy favorite, but this album was apparently not a hit with voters.

Rap fans will also raise their eyebrows at Travis Scott’s exclusion from the big awards categories; the Super Bowl halftime performer’s hit release Astroworld only received genre nominations. Kanye West, meanwhile, may have been everywhere over the course of the year, but he only got one nomination — in the producing category. Many well-received albums — including Mitski‘s Be the Cowboy, Shawn Mendes’s self-titled album and Chris from Christine and the Queens — were relegated to smaller categories or left out. Some darlings of Grammys past, like Sam Smith and Eminem, put out work that got minimal to no love at all from the Recording Academy this time around.

That’s a tough question to answer. Lady Gaga and Bradley Cooper’s “Shallow,” the emotional centerpiece of their movie A Star Is Born, has already taken home a number of film-related awards, and it’s favored to win an Oscar later this month. But its merits as a standalone song are undeniable — and might prove hard for the Recording Academy to resist. That said, Cardi B could give that song — and any of the Album of the Year contenders — a run for its money. Not only was “I Like It” featuring Bad Bunny and J Balvin a streaming juggernaut, but Cardi’s entire debut work Invasion of Privacy proved critically successful. On the other hand, with Kendrick Lamar losing out to Bruno Mars in 2018, the Recording Academy might choose to reward him this year instead.

If Brandi Carlile comes out on top, it will surprise most casual listeners; her music has not made a major mark on radio or the charts, while heavyweights like Drake and Cardi B have been nothing short of ubiquitous. But she is well-liked by the Recording Academy, given the number of nominations she received. And hip-hop-favoring voters may end up splitting their votes thanks to the abundant options in that genre.

But will Drake be there?

Probably not. Despite his 35 nominations prior to this year’s pending seven, Drake has only won three Grammys. He’s skipped the ceremony over the past few years, too. So while Scorpion has received plenty of love this year, he’s got stiff competition that may convince him to sit this one out once more.

Swift will probably skip: she was only given one nomination in a minor category, after all. Ariana Grande has two nominations this year in pop categories, but since she’s releasing a new album two days before the ceremony and going on tour this spring, she may be tied up with her preparations. Beyoncé, who was nominated alongside her husband Jay-Z for their Everything Is Love collaboration, has better things to do than attend a ceremony that continually snubs her. And Rihanna, who just celebrated the three-year anniversary of the release of her last album, ANTI, has been busy since then building her empire beyond music; don’t expect her to drop by, even if she does love to bring the party.

Arguably the world’s biggest boy band and musical act, the seven-member group BTS was given exactly one Grammy nomination this year (for Best Recording Package), despite putting out an album that broke records. Sorry, ARMY. The Grammys are adapting, but progress is slow. That said, they did nab a presenter spot, according to Variety, so fans will be thrilled to spot them during the telecast. 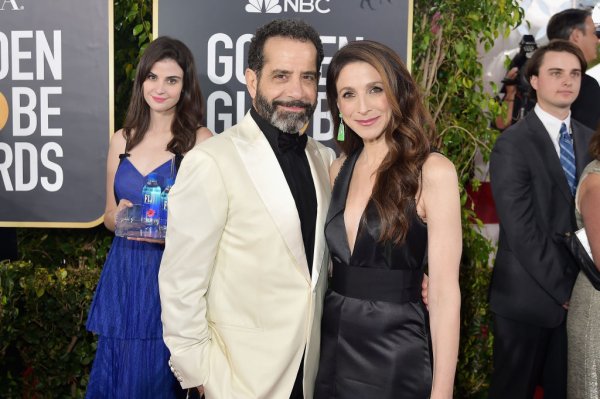 There Were 'Fiji Water Girls' at the Screen Actors Guild Awards But There Was One Key Difference
Next Up: Editor's Pick