'I'm Going to Save Every Dollar I Can.' Government Workers Are Saving and Looking for Private Industry Jobs to Prepare for Another Shutdown

Hundreds of thousands of federal workers and government contractors are returning to work this week after the longest-ever government shutdown in U.S. history came to an end on Friday. But their shutdown worries and financial constraints aren’t gone.

Several workers said it’s great to get back into a routine and start receiving a paycheck after more than a month of uncertainty. But the insecurity wrought by the shutdown—which lasted from Dec. 22 to Jan. 25 after a standoff between President Donald Trump and Congress over funding for a $5.7 billion wall along the Mexican border—is still there. Government workers who spoke to TIME over the course of the shutdown about the challenges of not receiving pay say they are worried about the precariousness of their situation and are increasingly angry about their jobs being on the line because of the budget battles.

While Trump signed a bill to temporarily halt the shutdown by funding closed agencies until Feb. 15, that leaves less than three weeks until the government could stop fully functioning again—which would mean yet another missed paycheck for federal workers. To make things more anxious, Trump has indicated he doesn’t believe that congressional negotiators will come up with a deal on border security that he could accept. The White House has threatened another government shutdown if Trump’s demands are not met. On Wednesday, Trump said in a tweet that the bipartisan committee of lawmakers who are negotiating border security funding is “wasting their time” if their talks don’t include a “wall or physical barrier.”

Over the 35 days of the partial government shutdown, workers missed two pay periods, bringing into focus the high number of Americans who live paycheck-to-paycheck. Several federal employees and government contractors sought out additional work; others were recalled back to their jobs without any pay. Some set up online fundraisers, which helped in the interim, and cut corners where they could to ease the financial pressures.

Now, some federal workers and contractors say the prospect of another government shutdown seems inevitable. This time, they’re trying to prepare.

“I’m going to save every dollar I can until a permanent budget is passed,” says Jazz Sexton, an Internal Revenue Service employee based in Pittsburgh.

Sexton, 32, is among the estimated 800,000 federal employees who will receive retroactive pay for the time they were furloughed during the shutdown. While the shutdown left her unable to pay her share of the rent and other bills, the backpay from the government, her tax refund and at least one more paycheck will put her in a better position should the government cease many operations in a few weeks. She predicts the government will shut down again, and is holding off on making any major purchases, such as a new transmission for her car.

“Another shutdown is the general expectation,” she says.

Julie Burr, an employee for a private company contracted with the Department of Transportation, told TIME at the start of the shutdown that she was taking on extra shifts at Barnes & Noble to help offset the money she lost while furloughed. A single mother, Burr later established an online fundraiser on GoFundMe where she was able to raise about $12,000, which she says she was lucky enough to be able to use as a resource. She will not receive any retroactive pay.

The shutdown, she says, has permanently changed her perspective on what she’s willing to do for her family. The fear that the government will shut down again after Feb. 15 is all too real for her, and may push her to find work in a new field.

“I can’t rely on this for my family,” she says. “I love what I do, but as long as this President feels that he can do this, I’m just fearful that will happen again for whatever reason he might come up with. Right now, it’s the wall. Next year, it may be something else he decides he wants money for.”

For now, she’s concentrating on building up savings.

“I only had $500 in savings before this. Now, I feel almost a panic about letting my bank account go below $2,000,” Burr says. “Before, I thought, we could splurge a little bit because there’s a paycheck coming. Now, I’m thinking I don’t know if I have that paycheck.”

Others say the few weeks that remain until the government loses funding leaves little time to build a meaningful cushion. One IRS employee based in Philadelphia who declined to share her name says her retroactive pay will help settle a few bills and stock up on groceries in the event of another government shutdown. But the end of the shutdown seems “too good to be true,” she says.

“By the time we get our back pay and catch up on bills somewhat, we all may be back in the same boat,” she says. “There won’t even be any time to save any emergency funds if we shut down on the fifteenth.”

Jolisa Brooks, a federal employee based in Washington D.C. who declined to specify her agency, says it was already hard to save money before the shutdown. She earns $1,200 from each paycheck and pays $1,700 in rent. Add up bills and other everyday costs, and there isn’t much left to add to savings. Brooks, 25, says she will be “more proactive” about asking for what she needs in the event of another government shutdown, including asking her creditors to defer rent and utility payments and being aggressive in looking for an additional job. When the government first shut down in December, she thought it would end quickly. Now, she knows how serious things can get.

“I am going to be more honest about where I am financially and how willing I am to work,” she says. 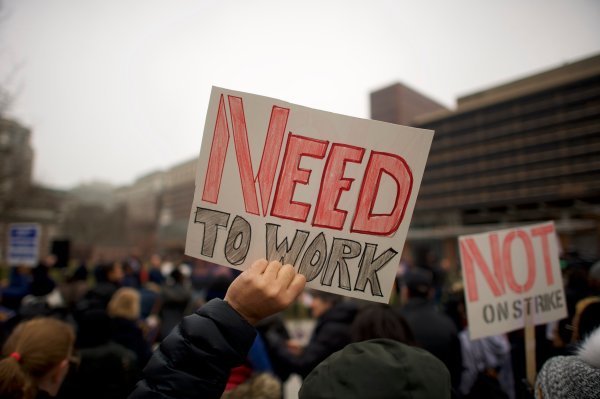 Shutdown Pain for Contractors Who Don’t Get Back Pay
Next Up: Editor's Pick