'Your Ignorance Could Kill You:' How Minnesotans Are Preparing for Minus 60 Wind Chills

Northern Americans know a thing or two about cold weather. But the unusually cold temperatures expected this week have even them hunkered down.

Temperatures are forecasted to drop well below zero from Canada to Chicago on Tuesday, but the worst is expected to hit the Dakotas and Minnesota. Temperatures may dip into the -30s and -40s there on Tuesday and Wednesday, with a wind chill as low as the -60s, said National Weather Service Meteorologist Nick Carletta.

“This is going to be very cold, even for us,” Carletta said.

Some of the worst cold is expected to hit the city of Bemidji, Minn. For the first time in five years, the superintendent has ordered schools closed, and some of the heartiest people are planning to take extreme measures to stay warm.

Austin Graser, who has lived in the area for his whole life, isn’t one to be bothered by the cold. Graser runs Bemidji Transport and Rental, a company that specializes in helping drivers whose cars break down in areas where tow trucks can’t reach.

Graser said that he often finds himself digging cars out of ditches in extremely cold temperatures, and has gotten used to it over time.

“When it’s below zero, I’ll still check the mail in my pajamas. It doesn’t bother me much,” Graser says.

However, Graser says, extremely cold weather can be particularly dangerous for drivers. When cars get stuck in a ditch or a driveway, it can be difficult to move them because door handles and bumpers can snap. Even plastic snow shovels can snap when the weather gets cold enough, Graser says.

“Everything is more brittle, even plastic shovels shatter,” Graser says.

“If it’s high winds, your fancy furry jacket won’t do any good,” says Graser. “One breath of wind can suck the heat out of you.”

Graser says that it’s also important to make sure that you wear waterproof clothes. People often sweat in heavy clothes, which can lead to hypothermia.

“If you’re not dressed properly, it’s intensely painful,” Graser says. “If you don’t know these things, your ignorance could kill you.”

Tim Lutz, Bemidji’s local school district’s superintendent, said that he had decided to close the schools on Tuesday in order to protect the district’s children. The temperature is potentially life-threatening, Lutz says – which is especially dangerous because some children walk to school.

“There are certain temperatures that you can’t get used to, even when you’re from here,” he said.

Lutz says that the school will remain unlocked and that several staff members will remain on-site. Some families in the school district do not have access to a phone or television, Lutz says, so there is a possibility that some parents will not hear about the cancellation.

“We want to make sure that the doors are open, that there’s a warm place and someone’s there to say, ‘Jimmy, there’s no school today,’” Lutz says.

Ami Aalgaard, the principal of Gene Dillon Elementary, says that the children at her school are taught about staying safe in the cold every October from kindergarten to third grade. According to Aalgaard, the kids are told to be aware of their surroundings when they’re outside, and to constantly be aware of where to seek shelter.

“We are kind of hearty people by nature, but you have to be mindful when it’s that cold,” Aalgaard says. 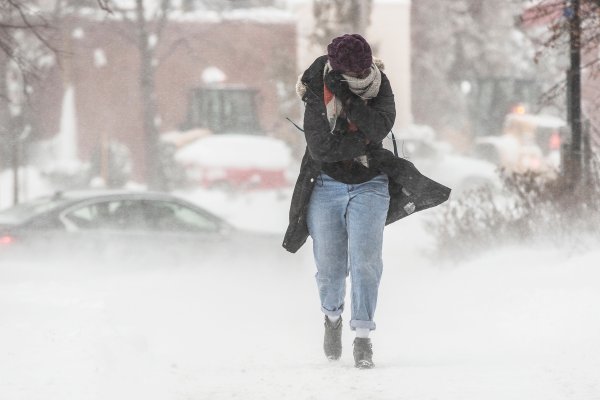 It's Going to Feel Like 50 Below in the Midwest This Week
Next Up: Editor's Pick