Think Democrats across the country are uneasy about the potential independent presidential candidacy of former Starbucks CEO Howard Schultz, who as a well-financed third party opponent, could bleed votes from the Democratic nominee, and ease Donald Trump’s path to a second term? Their worry won’t hold a cup of coffee to that of former fans of the Seattle SuperSonics.

Schultz bought the beloved ex-NBA team in 2001, then referring to the franchise as a “public trust” in the Seattle community. Five years later, Schultz — exasperated by his inability to secure public funding for a new arena for the Sonics, and turned off by NBA players whom he considered overpaid and disengaged — sold the team, for an attractive profit, to a group led by Oklahoma City businessman Clay Bennett. Yes, Bennett, not Schultz, ultimately moved the franchise from Seattle to Oklahoma City a couple of years later. But many jilted Sonics fans still blame Schultz for the loss of their team.

“The number one villain on our list is Howard Schultz,” says Jason Reid, director of the documentary Sonicsgate: Requiem For A Team. “He had the power to keep the Sonics in Seattle forever.” Reid is no fan of Donald Trump, but he could never support Schultz against him. “This is my worst nightmare,” says Reid. “Virtually anybody but Schultz. He’ll never get my vote.”

Such complaints by angry basketball fans, who can’t quite get over that their local team left a decade ago, are easy to dismiss. After all, Schultz did build Starbucks into a $25 billion company with more than 28,000 stores in 76 countries. That experience is surely worth more on a candidate’s resume than flawed ownership of an NBA team for five years, right? Teams change hands all the time. Relocation isn’t all that uncommon. Maybe give Schultz a bit of a pass here?

First of all, whether you’re running a coffee company or a basketball team or the United States, you want to know that your leader can be trusted. As Seattle fans see it, he called the Sonics a public trust in the Pacific Northwest, then sold them to an out-of-town bidder. “People need to know, he is just not honest and full of rhetoric,” says Reid.

Schultz was also really bad at politics, which hurts the case of someone vying for the highest political office in the land. He clashed with the most popular player on the team, Gary Payton, and the team traded the future Hall of Famer; that’s no way to play to your base. “Gary has absolutely nothing to say about that man,” said a Payton rep. Schultz failed to build a coalition of city and state government officials to compromise on arena funding and keep the Sonics in Seattle. He failed to read the political winds. Yes, the Seattle Mariners and Seattle Seahawks had recently received public funding to build new homes. But rather than sensing taxpayer fatigue, Schultz felt the Sonics were entitled to their payday.

He also made the mistake of publicly complaining about his team’s situation in early 2006, just days before the Seahawks were to play in their first Super Bowl in franchise history. Grousing during what should have been a joyous time for Seattle sports fans didn’t endear him to anyone. Schultz also alienated government officials. State house speaker Frank Chopp, for one, refused to bend. “A big read flag for me is that he didn’t understand the messy game of politics,” says Jeremy Repanich, a former Sonics employee during the Schultz era, and current restaurants editor for the Robb Report. “He was no match for Frank Chopp. How is he going to outmaneuver Nancy Pelosi?”

Schultz’s stewardship of the Sonics also displayed a penchant for short-term thinking. If he would have stuck out the team’s unfavorable lease agreement at Key Arena for a few more years, a more forgiving public have have embraced a financial compromise, especially with some more distance between a potential Sonics deal and the public subsidies for the Mariners and Seahawks. He could have negotiated more favorable terms, or build on that public-private coalition to construct a new home for the Sonics.

A year after the sale, Seattle landed a future superstar, Kevin Durant, in the draft. Right before the franchise packed up for Oklahoma City, the Sonics drafted another future NBA MVP, Russell Westbrook, in 2008. The next year, the Thunder selected a third MVP, James Harden. Imagine if those superstars thrived for the Sonics, in a new or refurbished arena, for an enthusiastic, affluent fan base in a market that serves as a gateway to the Pacific Rim and its millions of basketball fans. NBA franchise values have skyrocketed this decade. The Houston Rockets, for example, went for $2.2 billion in 2017. It’s likely that Schultz could have sold the Sonics for many multiples of the $350 million he and his investor group fetched from Bennett in 2006 (Schultz’s group bought the team for $200 million in 2001.) A representative for Schultz did not immediately return TIME’s request for comment.

On the campaign trail, candidates try to find virtue from failures. Do Schultz’s critics believe he can learn lessons from his Sonics debacle, and apply them to his political career? “The biggest tell for me is he won’t go though the primaries,” says Repanich, who in a 2012 Deadspin piece on his life on a Sonic employee, shared a biting anecdote: Schultz once gave Sonics employees $3.50 Starbucks gift cards as a holiday gift. Though Schultz describes himself as a “lifelong Democrat,” he believes the party has moved too far to the left. Schultz plans to run as an independent centrist. “In presidential politics, the party does become bent to the person who becomes the de facto leader,” says Repanich. “He’s unwilling to do that work. He’s skipping over steps. That’s what I saw him do in lobbying to get a new arena. He wants a different set of rules for himself.”

During a 2013 interview with a Canadian TV host, Schultz called the experience of owning the Sonics a “nightmare.” For years, he continued to place the blame for the Sonics debacle on things like the entitlement of rich young players. “I just thought the culture of professional sports and athletes that were making that much money, it was just inconsistent with my ability to kind of alter the mentality,” he said in the interview. “I think when you’re 18, 19, 20 years old, and you’re making millions of dollars and you don’t have the right support staff around you, you’ve got people who are trying to take advantage in one way or another, it’s very hard to come to grasp with that. Most people are not mature enough to handle it. And at the same time they’re trying to win games and sometimes the motivation isn’t there to win. It just was inconsistent with my value system.”

As he launches the publication of a new book and possible presidential campaign, Schultz is now owning up to his Sonics mistakes. Given the timing of his mea culpa, his critics find it disingenuous. Of the 335 pages in “From The Ground Up: A Journey To Reimagine The Promise Of America,” Schultz devotes four-and-a-half of them to his ownership of the Sonics. He claims that selling to Bennett was part of a strategy to keep the team in the Pacific Northwest. “Someone from outside Seattle, I thought, might have a better chance of negotiating a new arena deal because the threat of losing the team could push city officials to come to the table with more favorable terms,” Schultz writes. In other words, Schultz thought Bennett was in a better position to squeeze taxpayers than others. “In retrospect, this was not a fair position to impose upon the city,” Schultz writes.

Schultz doesn’t deny any fan of Payton, Shawn Kemp, Slick Watts, Jack Sikma, and Sonics green and gold their lingering rage at him. Schultz saves the words Sonics fans have waited to hear for the very end of his brief section on the team — though they might not be worth much at this point. “I will forever,” he writes, “be deeply sorry.” 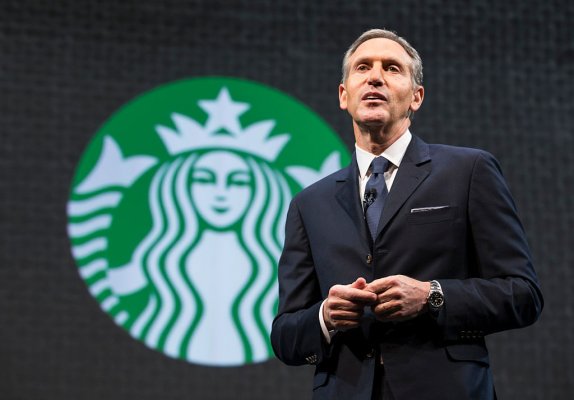 Howard Schultz's Presidential Ambitions Are Small-Scale
Next Up: Editor's Pick