A masked member of the Ukrainian special forces stands guard outside the regional administration building in Kharkiv, April 8, 2014.
Olga Ivashchenko—Reuters
By Charlie Campbell

NATO is warning Russia that any further intervention in Ukraine would be a “historic mistake” and has urged Moscow to pull back the tens of thousands of troops currently amassed on Ukraine’s southern and eastern borders.

“I urge Russia to step back and not escalate the situation in east Ukraine,” said Secretary-General Anders Fogh Rasmussen said in Paris during a seminar on NATO reform, according to the BBC.

Hundreds of pro-Russia demonstrators seized and barricaded themselves inside government buildings in the east Ukrainian cities of Kharkiv, Donetsk and Luhansk on Sunday night, chanting “Russia! Russia!” and calling for “peacekeepers” to be sent in from across the frontier.

A truce was agreed following negotiations between protesters and officials, and comes after the SBU accused those inside of wiring the building with explosives and holding 60 people hostage, charges denied by the protesters.

Demonstrators are demanding a referendum to facilitate the secession of eastern provinces from Ukraine to join Russia, in a similar vein to what recently took place in Crimea.

On Tuesday, a brawl erupted inside the Ukrainian parliament in Kiev after a Communist leader accused nationalists of adopting extreme tactics and so playing into the hands of Russia.

Yanukovych fled Kiev for Russia in February after more than 100 people died in unrest triggered initially by his refusal to sign an tariff agreement with the E.U. and to instead pursue closer ties with Russia. 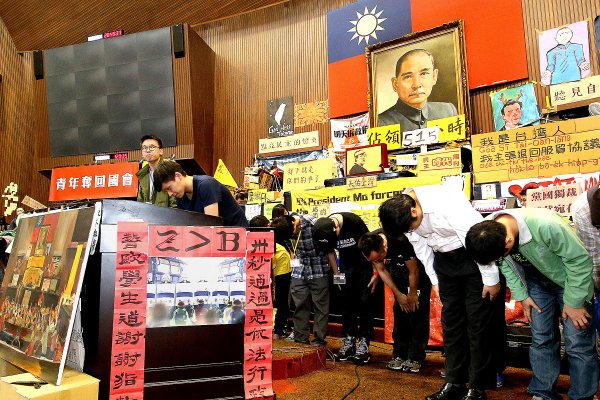 The Occupation of Taiwan's Parliament Ends Today, but the Struggles Do Not
Next Up: Editor's Pick