It's Going to Feel like 50 Below in the Midwest This Week. Here's What Extreme Cold Does to Your Body

Parts of the Midwest are bracing for their coldest temperatures in decades this week, with Tuesday night conditions predicted to feel like 50 degrees below zero or colder in areas of the Dakotas, Minnesota and Iowa, according to AccuWeather. Temperatures in Chicago are also predicted to dip below negative 25 for the first time since the mid-1980s, AccuWeather says.

Health officials have warned residents to stay indoors as much as possible, since the brutal cold can become dangerous in just minutes. But what actually happens to your body in the frigid air? TIME asked Dr. Ronald Furnival, a pediatric emergency physician and a professor at the University of Minnesota Medical School.

Almost as soon as you step outside, your body starts to siphon blood flow away from your extremities to focus on keeping your brain and internal organs warm. That’s why your fingers, toes and ears tend to get cold before your core, Furnival says.

“The blood vessels would start to contract and reduce blood flow” to areas including the face, ears, nose and fingers as a “defense mechanism” against extreme cold, Furnival says.

For most people, at least in the short-term, this adjustment is pretty harmless. But Furnival says people with preexisting heart conditions may be at risk of complications associated with these blood pressure changes, especially if they try to do strenuous outdoor activity like shoveling snow.

After a few minutes

In extreme cold, frostbite — or the freezing of skin and underlying tissues — can start to set in after just five to 15 minutes outside, Furnival says. The process can be especially quick if your skin is wet, or if you’re not properly covered up with hats, gloves and boots, in addition to warm clothing.

“Exposed extremities and digits and things can get frostbite fairly quickly,” Furnival says. “If there’s a strong wind and the weather’s pretty cold and the windchill is pretty low, then it goes a lot faster.” Risk of frostbite intensifies whenever the temperature drops below five degrees Fahrenheit, according to the Mayo Clinic, and becomes especially pronounced when cold and wind cause temperatures to fall below negative 16.6 degrees.

While mild to moderate frostbite can be reversed with warm water and blankets, severe frostbite can lead to permanent or long-lasting damage in the affected area. Signs of frostbite include a prickling feeling, followed by numbness and changes in the skin’s color and appearance. It may turn pale, red or blue, or take on a waxy look, according to the Mayo Clinic.

Furnival says signs of hypothermia, or a core body temperature that falls below 95 degrees, can surface after just 30 minutes to an hour in frigid temperatures.

“You start to have some decrease in your central temperature, so you can have some mild hypothermia to moderate hypothermia develop,” Furnival says. “People might start to feel confused and start to slur their words and start to have some neurologic changes. Some of the central core organs might be affected, so they might have problems with rapid heart rate and even worsening of the extremities, if blood flow is further reduced to those extremities.”

Furnival says individuals with preexisting medical conditions and children, who have less insulation, are at particular risk. But everybody, even otherwise healthy adults, should be aware of these dangers and take appropriate precautions, Furnival says.

“Cover up as well as you can with hats and gloves and mittens and boots and warm clothing, and then limit your exposure outside,” he recommends. “It’s okay to go outside, but you have to prepare for it, and you have to be coming in periodically to warm back up.” 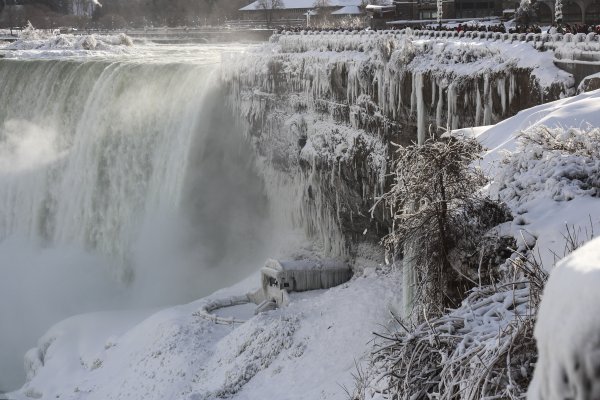 See Niagara Falls Transform Into an Icy Wonderland Amid Bone-Chilling Cold
Next Up: Editor's Pick