The U.S. War Refugee Board Helped Rescue Thousands During the Holocaust—Despite Franklin Roosevelt

It was a sight unlike any ever seen in the nation’s capital.

More than 400 rabbis, “most of them with shrub-shaped beards, many in silky cloaks with thick velvet collars” (as TIME magazine put it) marched to the White House just before Yom Kippur in 1943. They wanted to present President Franklin D. Roosevelt with a petition asking him to establish a government agency to rescue Jews from the Nazis.

FDR decided to snub the rabbis. He refused to meet with them or receive their petition for mercy. He even left the White House through a rear exit to avoid being seen by the rabbis. And he tried to block a subsequent Congressional resolution calling for creation of a rescue agency.

But four months later, on Jan. 22, 1944 — 75 years ago — President Roosevelt reversed himself and established the very rescue agency they were demanding, which he called the War Refugee Board. The remarkable story of FDR’s turnabout sheds light on America’s response to the most horrific humanitarian crisis of our time.

In December 1942, the Roosevelt administration and its allies publicly confirmed that the Germans were “carrying into effect Hitler’s oft-repeated intention to exterminate the Jewish people in Europe,” with “many hundreds of thousands of entirely innocent men, women and children” already having perished in “the Nazi slaughterhouse.”

But FDR was not prepared to go beyond a verbal denunciation of the mass murder. Spokesmen for his administration insisted there was nothing the U.S. could do to help the Jews “short of military destruction of German armies and the liberation of all the oppressed peoples,” as one official put it.

In reality, there were many avenues for U.S. action that would not have interfered with the war effort. For example, refugees could have been transported to the United States on Liberty troop-supply ships that were returning empty from Europe. The escapees could have been granted temporary haven to in U.S. territories such as the Virgin Islands.

Alternatively, many refugees could have been admitted to the U.S. within the existing immigration laws. Some 190,000 quota places from Germany and Axis-occupied countries sat unused during the Holocaust years, because the Roosevelt administration deliberately suppressed immigration below the levels permitted by law. The strategy for suppression was simple: “postpone and postpone and postpone the granting of the visas,” as Assistant Secretary of State Breckinridge Long explained to his colleagues.

In short, the problem was not that rescue was impossible. The real problem was the attitude that prevailed in FDR’s White House and State Department. If there had been a will to rescue, ways could have been found.

“The bull has to be taken by the horns in dealing with this Jewish issue, and get this thing out of the State Department into some agency’s hands that is willing to deal with it frontally,” Treasury official Josiah E. DuBois Jr. told Morgenthau and other top aides. “You get a committee set up with their heart in it, I feel sure they can do something.” His colleague John Pehle agreed: “It seems to me the only way to get anything done is for the President to appoint a commission or committee consisting of sympathetic people of some importance.”

Jewish refugee advocates provided the vehicle for such action. A political action committee known as the Bergson Group began sponsoring newspaper ads and lobbying Congress to take the refugee issue away from the State Department. The Bergson activists came up with the idea of a rabbis’ march to Washington, and they made the demand for creation of a rescue agency the centerpiece of the rabbis’ petition.

“The Acquiescence of the Government”

In November 1943, U.S. Senator Guy Gillette (D-Iowa) and Rep. Will Rogers Jr. (D-California) introduced a resolution, drafted by the Bergson Group, calling on the president to create an agency to “save the surviving Jewish people of Europe from extinction at the hands of Nazi Germany.” The Roosevelt administration sent Assistant Secretary Long to Capitol Hill to block the measure.

Long testified to the House Foreign Affairs Committee that the resolution was unnecessary because the U.S. was already “very actively engaged” in doing whatever was possible to rescue Europe’s Jews. Long’s claims were sufficient to persuade the committee to set the resolution aside without a vote. Had matters rested there, the Roosevelt administration might have succeeded in snuffing out any momentum towards rescue action.

But when Long’s testimony was made public a few weeks later, it turned out he had wildly exaggerated the number of Jews who had been admitted. Long’s assertions were forcefully refuted in the press by Jewish organizations and other refugee advocates. As the controversy escalated in December, the Senate Foreign Relations Committee unanimously adopted the Gillette-Rogers resolution, and a full Senate vote was scheduled for late January 1944.

Secretary Morgenthau’s aides, who were closely monitoring the fight over the Gillette-Rogers resolution, pleaded with the Treasury Secretary to strike while the iron was hot. It was time to go the president, they urged—to explain to FDR that “it will be a blow to the Administration” if the full Senate were to adopt a resolution that would in effect rebuke him, just ten months before Election Day.

Morgenthau agreed that the congressional tumult gave him crucial ammunition. “I personally hate to say this thing, but our strongest out [with the President] is the imminence of Congress doing something,” the secretary remarked. “Really, when you get down to the point, this is a boiling pot on the Hill. You can’t hold it; it is going to pop, and you have either got to move very fast, or the Congress of the United States will do it for you.”

The Treasury staff had been gathering evidence of the State Department’s obstruction of rescue, and now they handed Morgenthau his main weapon: a stinging 18-page report, authored by DuBois and edited by his colleagues, titled “Report to the Secretary on the Acquiescence of This Government in the Murder of the Jews.” It thoroughly documented the whole sordid story of rescue opportunities that were obstructed, quotas that were deliberately left unfilled, and Holocaust news that was suppressed.

On Jan. 16, 1944, Morgenthau met with President Roosevelt in the Oval Office and presented FDR with an abbreviated version of the “Acquiescence” report (with the toned-down title, “Report to the President”). He included a draft of an executive order establishing a “War Refugee Board.”

DuBois had suggested that Morgenthau tell the president that if Roosevelt did not act, he (DuBois) would “resign and release the report to the press.” But Morgenthau did not need to go that far. He told the president he was “deeply disturbed” to discover that State Department officials were “actually taking action to prevent the rescue of the Jews.” Citing his father’s World War I-era efforts on behalf of Armenian genocide victims, Morgenthau said he was “convinced that effective action could be taken”—thus contradicting the administration’s longstanding line that Jews could be saved only by winning the war.

President Roosevelt recognized how embarrassing it would be to have the full Senate call attention to his administration’s stark humanitarian failure. The political cost of taking no action now outweighed his longstanding policy of not taking special steps to aid Europe’s Jews. Pre-empting congressional action by unilaterally establishing a rescue agency was the politically advantageous route. At the end of the 20-minute discussion, the president said, “We will do it,” and six days later he issued an executive order creating the War Refugee Board.

Although understaffed and underfinanced, the War Refugee Board played a key role in the rescue of some 200,000 Jews and 20,000 non-Jews in the final 15 months of the war. Among other actions, it provided funds to bribe Nazis and shelter Jews, and facilitated and financed the life-saving work of Swedish diplomat Raoul Wallenberg in Budapest.

But many more lives could have been saved if President Roosevelt had not been opposed to rescue before he was for it. For example, he could have established the War Refugee Board when refugee advocates first requested it, instead of fighting it tooth and nail for so many months. And he could have given the War Refugee Board proper funding, instead of providing only a token initial sum (90% of the Board’s budget had to be supplied by private Jewish organizations).

What a difference it would have made if FDR had extended some of his reputed humanitarianism to Europe’s Jews before most of them had been murdered by Hitler. Instead, as David S. Wyman wrote in his 1984 best-seller ‘The Abandonment of the Jews,’ “the era’s most prominent symbol of humanitarianism turned away from one of history’s most compelling moral challenges.”

Dr. Rafael Medoff is founding director of The David S. Wyman Institute for Holocaust Studies, and the author of The Jews Should Keep Quiet: President Franklin D. Roosevelt, Rabbi Stephen S. Wise, and the Holocaust, forthcoming from The Jewish Publication Society in 2019. 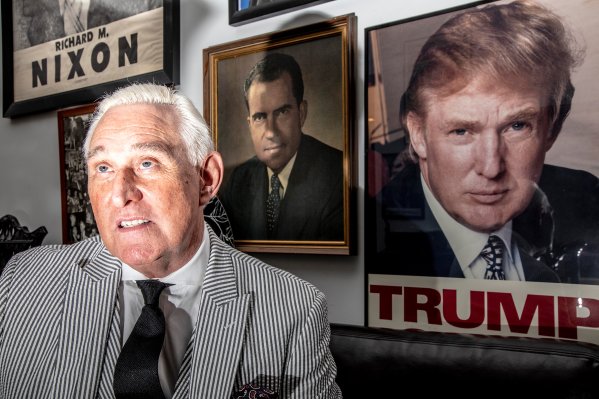 How Roger Stone Connects Trump and Nixon
Next Up: Editor's Pick