(Bloomberg) — A standoff is developing at the U.S. Embassy in the Venezuelan capital after a top Socialist Party official threatened to shut off electricity to the complex amid a growing power dispute in the oil-rich nation.

President Nicolas Maduro quickly severed diplomatic ties with the U.S. on Wednesday after Donald Trump publicly backed the opposition’s Juan Guaido as the legitimate leader of Venezuela and gave U.S. diplomats 72 hours to leave the country. Secretary of State Mike Pompeo responded to Maduro by saying the U.S. doesn’t recognize his authority and therefore won’t pull its staff, prompting Diosdado Cabello, a close Maduro ally, to make the threatening comments.

“They say they don’t recognize Nicolas,” Cabello said late Wednesday on state television. “OK. Maybe the electricity will go out in that neighborhood, or the gas won’t arrive. If there are no diplomatic relations, no problems.”

The deadline Maduro gave for the U.S. to remove its staff would expire in the afternoon on Saturday, Jan. 26. A refusal to evacuate would test Maduro’s reaction and whether he’d be willing to use force to try to expel them from the country which could in turn trigger a strong reaction from the U.S. including tougher sanctions. The U.S. has been preparing possible oil sanctions, and Trump said on Wednesday that he wouldn’t even rule out military options.

The friction over the hilltop embassy compound punctuated a dramatic week in what was once South America’s richest nation. Guaido, president of the opposition-dominated and powerless National Assembly, said that the nation’s constitution made him president in the absence of a legitimate chief executive. The U.S. publicly backed his claim and opposition supporters filled the streets in the biggest demonstrations since deadly clashes in 2017.

Venezuelan Defense Minister Vladimir Padrino Lopez, one of the key brokers to resolve the power struggle, publicly backed Maduro Thursday while welcoming dialogue with other governments to find solutions. During a press conference, he called the latest developments “very dangerous” and denounced a coup attempt by the Guaido-led faction.

And Russian President Vladimir Putin, a longtime ally and financial backer of socialist Venezuela, spoke to Maduro Thursday to voice his continued support and express his concerns about meddling from the U.S. and the other countries that have backed Guaido. “Destructive external interference severely violates basic norms of international law,” Putin said.

In his message on Wednesday, Pompeo directly addressed the Venezuelan armed forces as part of his effort to keep U.S. personnel in the country safe.

“We call on the Venezuelan military and security forces to continue protecting the welfare and well-being of all Venezuelan citizens, as well as U.S. and other foreign citizens in Venezuela,” Pompeo said Wednesday night. “The United States will take appropriate actions to hold accountable anyone who endangers the safety and security of our mission and its personnel.”

The embassy sits atop a lush green hill in the privileged east of the city in the Valle Arriba neighborhood. It’s visible from many parts of Caracas, as is the enormous U.S. flag that flies in the wind in front. Beyond fences and security, the complex has multiple floors underground and could act as a bunker if needed.

While the embassy in Venezuela is a virtual fortress by comparison, the U.S. has a politically sensitive record in protecting more vulnerable diplomatic facilities.

More than 50 Americans were held hostage inside the U.S. embassy in Tehran after the overthrow of the U.S.-backed Shah of Iran in 1979. In 2012, four Americans were killed by terrorists at poorly guarded diplomatic outposts in Benghazi, Libya. As a Republican lawmaker, Pompeo played a leading role in efforts to blame then-Secretary of State Hillary Clinton for failing to provide more security.

Venezuela and the U.S. haven’t exchanged ambassadors since 2010. Last year, Maduro kicked out the top diplomats after the U.S. and dozens of other countries criticized his victory in the presidential election as a fraud. The U.S. charge d’affaires is James Story. Efforts to reach him were unsuccessful.

Thursday morning, traffic around the embassy was normal, and citizens jogged and walked their dogs nearby. Two staffers walked on the sidewalk down toward the entrance, with coffee in hands. Cars were queuing at the gate of the compound and five waited in a row before being searched by Embassy personnel.

U.S. diplomats sent out an alert to citizens living in Venezuela on Wednesday evening to say that citizen services would be available on Thursday but that all U.S. visa appointments had been canceled. The statement didn’t elaborate beyond Jan. 24 but noted that staff should stay close to the Valle Arriba neighborhood and avoid protests. 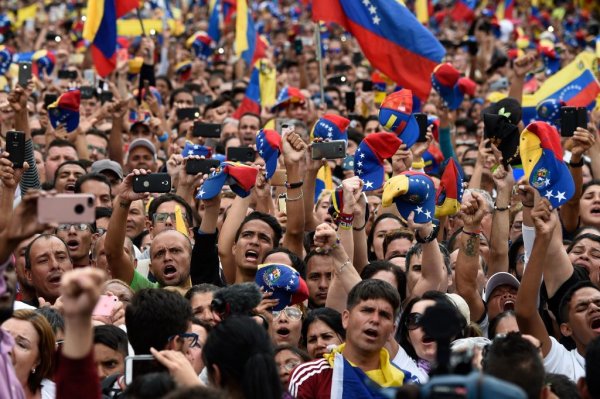 A Political Crisis Is Sweeping Venezuela. Here's What to Know
Next Up: Editor's Pick