These Female Showrunners Changed the TV Landscape. Now Their Shows Are Ending

In 2012, fixer Olivia Pope, played by Kerry Washington, made her power-suit-clad debut, covering up D.C.’s bad behavior by day and sleeping with the President by night. Initially, many critics dismissed Scandal, Shonda Rhimes’ follow-up to Grey’s Anatomy, as a “guilty pleasure”–a loaded term that conjures images of women eating cartons of low-fat ice cream in front of the TV. But Rhimes proved that a show isn’t a guilty pleasure just because it stars a woman, and Olivia’s exploits won over a large audience: two seasons later, ABC made Scandal the cornerstone of a Thursday-night block of hit dramas produced by Rhimes.

Two weeks after Olivia first graced the small screen, a narcissistic writer named Hannah Horvath declared herself possibly the “voice of a generation,” launching countless essays lamenting that millennial women would destroy the world. Girls, which starred its creator, Lena Dunham, had nothing in common with Scandal, except that both happened to be by and about women. Many reviewers also deemed Girls “unserious.” And while criticisms about the show’s whitewashed version of Brooklyn were warranted, objections to Dunham’s naked body reeked of sexism.

These shows ignited a conversation about what women could and couldn’t do onscreen, but they also marked a new era behind the camera: the rise of the female showrunner. Their saturation of popular culture convinced streaming services starting to generate their own original content that female television writers, once considered “risky,” might be worthwhile hires. Seven game-changing female-run shows premiered from 2013 to 2015: Orange Is the New Black, Broad City, Transparent, The Affair, Jane the Virgin, Unbreakable Kimmy Schmidt and Crazy Ex-Girlfriend. Each boasted a specific voice. Each changed the way audiences perceived women. And each will air its final episode in 2019.

Shows about women made by women had always been rare. Diane English’s Murphy Brown, Roseanne Barr’s Roseanne and Susan Harris’ Golden Girls broke ground in the ’80s and ’90s. Amy Sherman-Palladino’s Gilmore Girls and Tina Fey’s 30 Rock are now considered pop-culture canon. But those were largely the exceptions. Networks perceived women as a niche audience and argued that there simply wasn’t room for women’s stories in prime time.

But with the rise of Netflix, Amazon and Hulu, space became limitless, nullifying the sexist excuses of the past. Jenji Kohan never could have made Orange Is the New Black for a traditional network or cable outlet. When she created Weeds, about a pot-dealing suburban mom, at Showtime, she spent most of the first season fighting with the network about the so-called twisted morality of her protagonist. Orange Is the New Black was not about just one difficult woman living in a man’s world. The show was about dozens of women with different skin colors, sexual identities and body types–all locked up in one prison.

Kohan shopped Orange to HBO and Showtime, but Netflix was the only company to offer her a full-series order and total control. A year after the show debuted as part of the streaming service’s first original slate in 2013, Orange Is the New Black was nominated for 12 Emmys and won three. Those awards attracted eyeballs. Netflix doesn’t share traditional ratings, but Nielsen estimated that 5.3 million people watched Orange’s sixth season in 2018.

Streaming services began to seek out voices that might differentiate their libraries from those of the same networks that had ignored women for decades. Transparent became Amazon’s first major hit in 2014, and creator Jill Soloway hollered, “Topple the patriarchy” from the Emmys stage when they won Best Director in 2016. (Since the show began, Soloway has come out as gender nonbinary, using the pronouns they/them.) When NBC dropped Tina Fey’s Unbreakable Kimmy Schmidt before its debut, Netflix picked it up. A handful of female showrunners even established a group, nicknamed the Woolf Pack (after Virginia Woolf), to plot how to bring the kinds of stories that were long considered taboo to the small screen.

Recent conversations about sexism, rape culture and gender identity may have been stoked by politics, but they were primed by pop culture. The female-run shows ending this year fundamentally altered the way television portrayed women–and how audiences perceived them in real life. Orange Is the New Black introduced a trans character (played by trans actor Laverne Cox) a year before Transparent debuted an entire show centered on a trans woman (though controversially played by a cisgender man). Sarah Treem challenged the male gaze through which directors typically film sex and love with her show The Affair. She often filmed the same events from both a man’s and a woman’s perspective, illuminating their misconceptions about one another.

In comedy, Ilana Glazer and Abbi Jacobson put a female spin on dude-bro stoner fare with Broad City: in one memorable scene, a character wears pants stained with period blood so that when an airport security dog sniffs the marijuana she is smuggling, she can claim sexism. In Unbreakable Kimmy Schmidt, Fey and co-creator Robert Carlock mined the story of a horrific kidnapping for resilience and humor. Jennie Snyder Urman lent gravitas to romantic tropes often dismissed as whimsy in Jane the Virgin. Crazy Ex-Girlfriend creators Rachel Bloom and Aline Brosh McKenna penned a musical that featured songs like “Period Sex” and “Heavy Boobs.”

In this new era of feminist storytelling, audiences began to scrutinize male-run shows that cast women as either Madonnas or whores. True Detective came under fire for endless shots of strippers, and Game of Thrones faced backlash over frequent rape scenes.

Still, female writers continue to fight outdated norms. Rhimes leaned on the term vajayjay when the network restricted the number of times actors could say vagina, despite being more liberal with the use of the word penis. Bloom waged and lost a fight with the CW to air the entirety of “Period Sex,” which was considered too graphic, though depictions of rape are not. For all the gains female showrunners have made, a 2017 UCLA study found that parity remains elusive: 90% of showrunners are white, and 80% are male.

For decades, television has relied on a boys’-club system. Men were plucked from writers’ rooms of successful series and given their own shows: David Milch went from Hill Street Blues to Deadwood, Matthew Weiner from The Sopranos to Mad Men, and so on. And those men were often given several chances: HBO canceled Milch’s Luck after one season when several horses died on set, but he went on to co-write True Detective’s third season; Amazon wrote Weiner a $70 million check to make the poorly reviewed Romanoffs after Mad Men (and stood behind the show after harassment allegations were levied against him).

Networks rarely give women such opportunities. That’s why many of Hollywood’s breakout talents are following in Rhimes’ footsteps and leveraging goodwill on one project to build themselves into brand names: Lena Waithe parlayed an Emmy-winning episode she wrote for Master of None into deals for several new series. British writer Phoebe Waller-Bridge translated acclaim for her dark comedy, Fleabag, into a job as the head writer of last year’s Killing Eve and a planned rom-com-thriller mashup called Run.

Meanwhile, the female writers with the most clout are lending it to the next generation of women. Orange’s Kohan executive-produced GLOW, a Netflix comedy about female wrestlers, written by Liz Flahive and Carly Mensch. Amy Poehler, who buoyed Broad City, co-wrote the new dramedy Russian Doll with Natasha Lyonne and Leslye Headland. Fey, meanwhile, acted as executive producer on Tracey Wigfield’s Great News.

Ironically, the streaming services that facilitated the rise of these women may now be drowning out new talent. In 2013, Orange Is the New Black stood out among a handful of Netflix originals. But the amount of content has grown exponentially since then. Netflix made about 700 series last year, and both Apple and Disney plan to debut streaming platforms of their own.

Thankfully, we no longer treat women’s stories as curiosities to be scrutinized. When a woman can make a good show, a mediocre show or a truly terrible show without signaling something about her gender as a whole, then we might be getting somewhere. 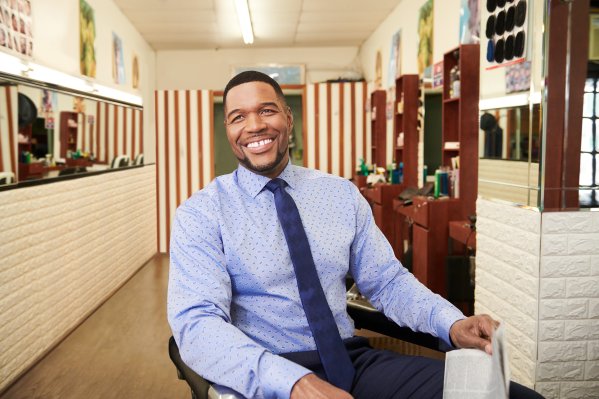 Michael Strahan Keeps Tabs on the Super Bowl While Expanding His Horizons
Next Up: Editor's Pick