"He’s never been mobile. But he knows how to step. Just like a dancer." —Michael Strahan, on Tom Brady, who’s reached a ninth Super Bowl
Pamela Hanson
By Sean Gregory

As a bruising lineman for the New York Giants, Michael Strahan used to do battle with 320-lb. behemoths every Sunday. Now, on a recent Friday morning at a New York City television studio, he’s dancing with an elderly woman to “Cake by the Ocean.” In his current gig as co-host of the highly caffeinated third hour of Good Morning America, known as GMA Day, Strahan does his fair share of pumping up the crowd. GMA Day is a bit like a designer-steroid version of Live With Kelly and Ryan–which Strahan co-hosted with Kelly Ripa in its Live With Kelly and Michael iteration, before a tabloid-friendly breakup ended their run in 2016.

An expert offers tips for decluttering your cell phone, and the studio audience emits woooooos, as if someone had just won a new car. (In fairness, they’re good tips. Unsubscribe from those lists.) And there’s dancing. So. Much. Dancing. Strahan enters the studio, getting down to Missy Elliott’s “Get Ur Freak On.” After a sweet segment with a 10-year-old boy who donated $100 of his own money to help cover the unpaid lunch bills of his classmates, Strahan writhes on the floor, doing the worm.

Reminder: it’s 10:30 a.m. on a Friday. Backstage after the taping, even Strahan questions how he summons the excess pep. “I’m going, What’s wrong with you?” says Strahan. “It’s weird.”

The performances are paying off. Strahan, the affable former football star with an instantly recognizable gap-toothed smile, now counts as one of the hottest commodities on television, having launched an unconventional post-NFL career that’s the envy of many of his peers. Sure, Strahan joins a merry band of ex-jocks, like the guffawing Terry Bradshaw and the studious Howie Long, talking football on Fox’s Sunday pregame show. But that’s just part of his broadcast portfolio: in addition to his role on GMA Day, he’s a co-anchor on Good Morning America and executive producer and star of ABC’s reboot of the $100,000 Pyramid game show. None of that fits the typical former-athlete game plan. During a GMA interview in early January, Strahan pressed comedian Kevin Hart about past homophobic tweets that ultimately cost Hart his slot as Oscars host. Hart came across as defiant. Strahan, a friend of Hart’s, refused to let him off easy.

None of which is to say Strahan isn’t turning his attention toward Feb. 3 and the Super Bowl LIII matchup between the New England Patriots and the Los Angeles Rams. Strahan knows a bit about dethroning the Pats’ Tom Brady. Back in 2008, his Giants upset the Patriots in Super Bowl XLII, costing New England a perfect 19-0 season. He encourages the Rams to enter this year’s Super Bowl with the same defiance he saw in his teammates. “We know they’ve beaten everybody under the sun,” says Strahan, who in conversation circles his hands and touches his chest when animated. “We know that they can prepare for anybody. Well, now it’s time to start our history. This is our time. F their time.”

Strahan’s time began in West Germany, where he grew up on an Army base. His dad was a major. Strahan was no can’t-miss football prospect. As a chunky 13-year-old, he cried when he realized why other kids called him Bob. It stood for Booty on Back. Or, worse, Big Ol’ Butt. “I thought Bob was a cool nickname,” he says. “I was devastated.”

The taunting, however, drove him to exercise. His father put him on a weight-lifting regimen, and they’d jog in the woods together. Convinced that his son could earn a football scholarship, Strahan’s father sent him to Houston for his senior year of high school. After he starred at Texas Southern University, the Giants drafted Strahan in the second round of the 1993 draft. Nearly a decade later, in 2002, he set the NFL’s single-season sack record. He entered the Pro Football Hall of Fame in 2014. Strahan sees parallels between his football and TV careers. Neither was carefully planned; he learned both on the fly. “Here’s a kid in Germany, go play football,” says Strahan. “‘O.K., Dad.’ Back in the day, do Live. I’ve never done it, figured it out. Do GMA. It scared me to death. Figure it out.”

His partnership with Ripa blew up in 2016, when ABC asked Strahan to join GMA full time. Ripa felt blindsided by the offer and did not report to work for nearly a week; she came back championing respect and communication in the workplace. He departed the show months earlier than planned. “I learned through all that went down with that, you can’t convince people to like you,” says Strahan. He credits Ripa for teaching him how to reach a new TV audience, though they’re no longer in touch. “I haven’t spoken to her in a long time,” he says.

Live led him to GMA, where he has thrived. So ABC execs decided to hand him and co-host Sara Haines the third hour of the morning show. (Unlike the extra hours of the Today show, which air after the main morning block, GMA Day runs in the early afternoon.) Strahan figured out how to grab attention for his nascent program. After President Trump fed the national champion Clemson University football team fast food during their Jan. 14 White House visit, Strahan announced on GMA Day that he’d pay for a lobster dinner for the squad. The show’s producers have reached out to Clemson; there’s still a chance the meal will happen. “I would have been excited to be at the White House,” says Strahan. “Then I would have walked out of there, like, ‘That was the meal? That wasn’t what I expected.’ If you’re going to go there, go all out.”

A couple of days before the NFC championship game between the Los Angeles Rams and New Orleans Saints on Jan. 20, I asked Strahan what he would change about football if he were named NFL commissioner. First, he recommended an overhaul of instant replay. “You should be able to review some of these calls that you’re not able to review,” Strahan says. The response was eerily prescient, as an official missed an obvious pass-interference call that almost certainly cost the Saints a Super Bowl berth. During the off-season, the NFL will discuss allowing refs to correct such judgment calls. “If you’re trying not to let human error be part of the game, use it for things like we saw yesterday,” Strahan says in a follow-up call after the game. “It’s a bad feeling. It kind of puts a damper on the Rams.”

That’s a shame, because Pats-Rams is an enticing matchup on the merits. Brady, 41, is the oldest quarterback to start a Super Bowl. Rams quarterback Jared Goff, 24, is the youngest to win an NFC championship game. L.A. certainly has the defensive skill to thwart the Pats. Rams lineman Aaron Donald threatened Strahan’s sack record this season. Ndamukong Suh, another member of L.A.’s defensive front, sacked Saints QB Drew Brees in the championship game. “You’ve got to get to Brady,” Strahan says. “It’s not easy. He’s never been mobile. But he knows how to step. Just like a dancer.”

Strahan’s key to Super Bowl prep was realizing that the field’s still 100 yards long. The Patriots, who have made the big game three years running, own the experience. The Rams can’t feel overwhelmed. “When you’re playing for something bigger than yourself, with a group of guys you love, that will get you going when you don’t have anything left in the tank,” says Strahan. “It’s not like in the Super Bowl they change the rules. It’s not that complicated. Realize it’s just freaking football.” 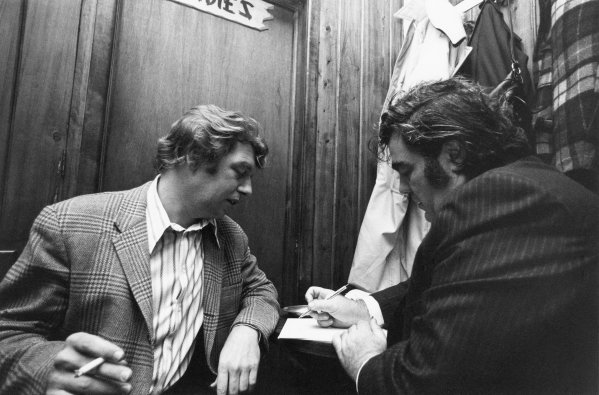 Deadline Artists Is a Love Letter to the Glory Days of Newspapers
Next Up: Editor's Pick