During this Sunday’s Super Bowl 53 Maroon 5 Halftime Show with performances from the rock band, Astroworld rapper Travis Scott and Outkast rapper Big Boi, singer Adam Levine grabbed attention by removing his tops layer by layer, and ending up shirtless by the end of his set.

Levine, who leads the rock band best known for their breakout 2002 album Songs About Jane and recent chart hits including “Girls Like You” with Cardi B and “What Lovers Do” with SZA, delivered a polished performance. Levine and his band started with their early hits, kicking off with “Harder to Breathe” before jumping into “This Love.” There was a brief cut to a clip of the cartoon SpongeBob SquarePants song “Sweet Victory,” following a popular petition to get the song performed at the Super Bowl.

SpongeBob only had a moment of onscreen glory, however, before rapper Travis Scott appeared to sing accompanied by Levine; Scott finished off his song with some crowdsurfing. Levine also sang a primarily a cappella version of “Girls Like You,” backed up by a gospel choir and a drum line. Big Boi made a splash decked out in a giant fur coat, singing Outkast hit “The Way You Move.”

But it was the halftime finale, with Levine singing Christina Aguilera collaboration “Moves Like Jagger,” that got audiences raising their eyebrows. Levine had already discarded an outer black jacket and a colorful bomber jacket, throwing a layer into the crowd. He finished things off by also removing his tank top, revealing a heavily tattooed torso. And viewers had plenty to say about his fashion choices — and ultimate lack thereof. In particular, some pointed out a double standard between the reactions to Levine and Janet Jackson. Jackson’s costume malfunctioned during her Super Bowl Halftime Show performance with Justin Timberlake in 2004, putting the story at the center of a prolonged moral and legal battle.

The halftime show was not without controversy before the show: there was a petition asking Maroon 5 to abstain from performing in solidarity with former San Francisco 49ers quarterback Colin Kaepernick. The band’s reaction? Promise a $500,000 contribution to Big Brothers Big Sisters of America, in concert with the NFL and their record label. That’s the same contribution that Travis Scott also chose to make.

“Playing the Super Bowl has been a dream of our band for a long time,” lead singer Adam Levine told PEOPLE in a statement prior to the show. “We thank the NFL for the opportunity and also to them, along with Interscope Records, for making this donation to Big Brothers Big Sisters, which will have a major impact for children across the country.”

However, the NFL and Maroon 5 did end up canceling the traditional pre-show press conference for the headliners. “As it is about music, the artists will let their show do the talking as they prepare to take the stage this Sunday,” an NFL representative told PEOPLE about the decision, made earlier in the week. 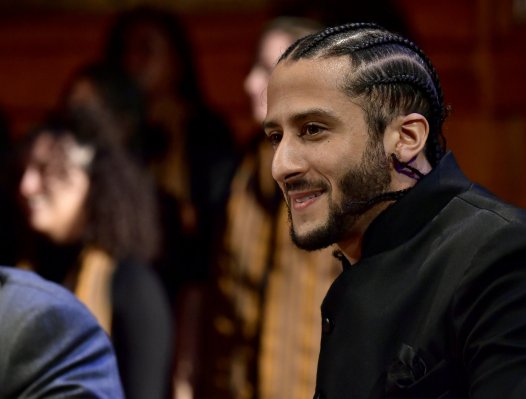 People Are Boycotting the Super Bowl to Support Colin Kaepernick
Next Up: Editor's Pick