U.S. Treasury Secretary Steven Mnuchin arrives with his Chief of Staff Eli Miller for a classified briefing with a group of bipartisan members of Congress on Jan. 10, 2019 in Washington, DC. If the government shutdown continues it could impact America's credit rating.
Chip Somodevilla—Getty Images
By Liz Capo McCormick / Bloomberg

(Bloomberg) — The U.S. political gridlock that has shut down part of the government risks running into a crucial deadline that would limit the Treasury’s borrowing ability, if left unresolved, and potentially threaten America’s top-credit standing.

While the looming end of a debt-ceiling suspension on March 1 won’t trigger credit-rating action, a prolonged standoff over the country’s debt limit well past that date would increase the risk of a technical default and raise the likelihood of a downgrade, according to some ratings analysts.

If Washington’s inability to compromise on a budget to reopen the government is mirrored in a failure to suspend or lift the U.S.’s debt ceiling before March 1, Treasury Secretary Steven Mnuchin will be forced to use extraordinary measures to pay America’s bills and stay under the statutory cap. While Wall Street expects these accounting maneuvers to buy Treasury until about August before the hard financing wall is hit, rating firms say any surpassing of that cliff would jeopardize America’s credit stature.

William Foster, a senior credit officer at Moody’s Investors Service, says their base case is that Congress and the White House will come to an agreement before then and the U.S.’s top rating will remain intact. Yet, if that doesn’t prove to be the case and a technical default — where Treasury even temporarily can’t make good on payments — occurs, it would raise the specter of a downgrade. The U.S. is top rated by Moody’s and Fitch Ratings, and one rank below by S&P Global Ratings.

“The main risk on the debt ceiling and the rating has to do with is if there was a technical default, which would happen several months after the March 1 debt-ceiling trigger — when the U.S. Treasury runs out of extraordinary measures,” Foster said by phone. “After that, there are many things that can happen, and have in the past. Passing March 1 just starts the clock for Congress to come to an agreement with the White House to raise the debt ceiling.”

Talks to end a nearly three-week government shutdown broke down Wednesday after President Donald Trump stormed out of a White House meeting with congressional leaders, saying it was a “waste of time.” Trump has shown no sign of backing down on his demand for border wall funding, a key campaign promise, while the Democrats have said they won’t negotiate until the president agrees to re-open the government. Trump heads to the U.S.-Mexico border in Texas on Thursday to rally support for building the wall.

“What this shutdown — and the length of it — shows us is that it is no easier today for Congress to make these funding decisions and work together,” Charles Seville, a senior director at Fitch, said by phone. He said Fitch wouldn’t review the rating until the so-called x-date, when scope for the Treasury to finance itself using extraordinary measures runs out.

In a protracted 2013 debt-limit episode, Fitch put the U.S. rating on negative watch given the government’s failure then to raise its borrowing limit as the Treasury’s hard deadline neared.

In 2011, a split House and Senate, similar to the incoming Congress, took the debt-limit debate down to the wire, prompting S&P Global Ratings to cut America’s sovereign credit grade for the first time. Back then the company cited the Washington gridlock as well as the lack of an agreement to contain the nation’s growing debt load for its decision.

“The current argument over funding the federal government generates uncertainty, which hurts the economy via the impact on confidence and investment,” Jeff Sexton, director of communications for the Americas at S&P Global, said in an emailed statement. “We do not think that the possible negative economic impact would hurt the sovereign rating.”

He said that “uncertainty in policy formulation and timely decision making” were some of the factors that led to the 2011 downgrade.

Foster at Moody’s said that even in the event of a technical default, the government would “eventually pay everyone back in full.” But the ratings firm expects an agreement to raise the debt ceiling before that happens. “We’d certainly expect that to happen, as they have done in the past. That is our base case. That would avoid a technical default.” 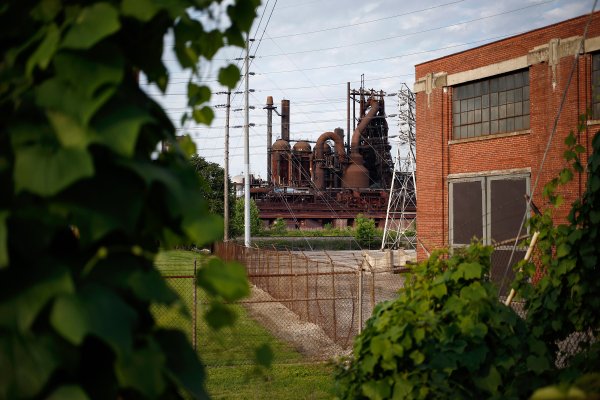 Why Did a Russian Firm Give Kentucky an Economic Lifeline?
Next Up: Editor's Pick