The Republican Party’s Best Hope for 2020? The Left’s Indignation

President Donald Trump attends a "Make America Great Again" rally at Bozeman Yellowstone International Airport on November 3, 2018 in Belgrade, Montana.
NICHOLAS KAMM—AFP/Getty Images
Ideas
By Michael Ashcroft
Lord Ashcroft is a businessman, philanthropist and pollster who served as deputy chairman of the Conservative Party in the United Kingdom from 2005–2010.

This past weekend marked the midway point between the last presidential inauguration and the next one. The contours of the race to decide who gets to deliver the next inaugural address are already beginning to emerge, and it promises to be no less spectacular than the last one. My research over the last two years, including a survey of 15,000 people conducted after November’s midterm elections, gives some clues as to how the battle might unfold.

President Trump’s base remains as happy as it was on the night of his victory. Supporters point to a thriving economy stoked by tax cuts and deregulation, two conservative Supreme Court appointments, a combative approach to international affairs and global trade deals, and a tough line on immigration and border security. They like that he continues to say exactly what he thinks and enjoy the fury this arouses. And if his statements don’t always line up with the facts, they see him as honest in what is to them the more important sense that, at least as they see it, he is doing the things he said he would – a rare enough trait in a politician. Meanwhile, most of those who voted against Trump in 2016 are every bit as horrified by his presidency as they expected to be.

But with the confrontational tone of Trump-era politics, it’s easy to forget that not everyone falls into one of those two camps. Those who picked the President as the lesser of two evils or switched to him having voted Obama in 2012, for example, are notably more lukewarm than Trump voters as a whole. As the midterms illustrated, the Republicans can no longer rely on prosperous suburbs that have been the mainstay of their support for decades. And more broadly, only just over three in five in my poll identified with either main party, and more than half called themselves moderate or only somewhat conservative or liberal.

But the terms of debate are being set by those at the far reaches of the of the political spectrum. In the deep red corner, we have the group my research has identified as the Fox News Militants: a segment of politically active and profoundly conservative Trump enthusiasts for whom the single biggest policy priority is immigration and border control. Way over on the other side are the Cosmopolitan Activists: people who are young, educated, affluent, often describe themselves as very liberal or even socialist and the most likely of all to talk politics on social media, donate to campaigns, attend political events and work actively for candidates. Healthcare tops their policy agenda.

Strikingly, my research finds this latter group to have doubled in size in two years to 15% of the electorate — and nearly half of what we identify as the Democrat core — while the two other predominantly Democrat-leaning segments we identified, the Mainstream Liberals and more socially conservative Blue-Collar Democrats, have shrunk. This illustrates a telling part of the movement’s response to the Trump presidency: People in our focus groups have described how they once considered themselves moderate but feel they have been driven leftwards by Trump and all his works.

Our polling also shows the impact their perpetual horror at the President’s words and deeds is having on their broader political outlook. Within the most liberal groups, since 2016 there have been dramatic falls in the numbers thinking life in America is better than it was 30 years ago, that life for today’s American children will be better than it was for their parents and that it is possible to be successful in the U.S., whatever your background. (The segments at the other end of the spectrum have become somewhat more optimistic on these points over the same period, while more centrist and disengaged voters think more or less the same on these big questions as they did then, suggesting that they take a more measured view of things than their partisan neighbors and many political commentators.)

Though they agree on very little, Fox News Militants and Cosmopolitan Activists — who constitute less than a quarter of the electorate between them — share a political zeal and a boundless enthusiasm for voting in their respective parties’ primaries. This means the most radical and left-leaning section of Democratic voters look set to have the biggest say over who goes up against Donald Trump. Not surprisingly, as my survey found, they overwhelmingly prefer the idea of a progressive liberal as their nominee to that of a moderate centrist.

At this stage, that is not a preference shared by most voters between the poles, let alone those who grudgingly backed Trump in 2016 but are open to an alternative. While they may be uncomfortable with the incumbent, are those Obama-Trump voters, moderate GOP-leaning suburbanites and independents who could not bring themselves to vote for either candidate last time around going to turn out for someone the most radical Democrats have chosen in their own image?

Ironically, then, the right’s best hope in 2020 could be the left’s reaction to it: that the spiral of indignation that has fueled its activism might drive Democrats to line up behind a candidate, platform and message perfectly calibrated to drive uncommitted voters back into the arms of Donald Trump. The President’s historically low approval ratings and the tiny winning margins in the states that put him over the top in the electoral college mean the Democrats have a huge opportunity. Even so, they may have to choose between a candidate they can celebrate and a candidate who can win. 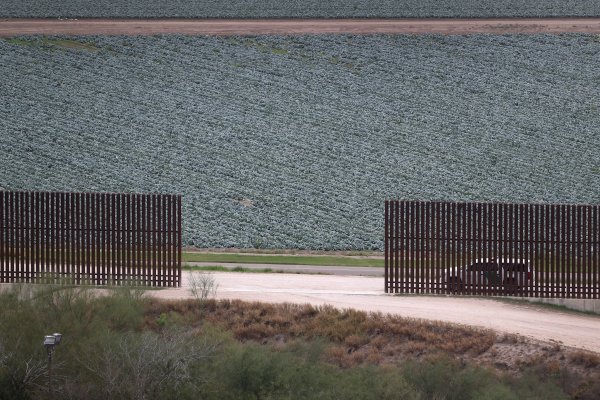 President Trump Went to a Border Town to Prove They Need a Wall. Residents Say Otherwise
Next Up: Editor's Pick