Former U.S. Secretary of State John Kerry speaks during an award ceremony for the Otto Hahn Peace Medal 2018 at the Rotes Rathaus in Berlin, Germany, on Dec. 14, 2018.
Hayoung Jeon—EPA-EFE
By Casey Quackenbush

When asked whether he had a message for the President, the Democrat from Massachusetts said Trump should “resign” after saying Trump “doesn’t take any of this seriously.”

The White House has not responded to the network’s request for comment, according to CNBC.

The President canceled his plans to attend the forum due to the ongoing government shutdown, which has left 800,000 government workers without pay for 32 days now.

In a tweet, the President denounced the media for criticizing his decision.

The government shutdown, now the longest in the nation’s history, prompted House Speaker Nancy Pelosi to urge President Trump to delay the State of the Union address on Jan. 29 — a plea he has rejected. In response, Trump canceled Pelosi’s planned trip to the Middle East. 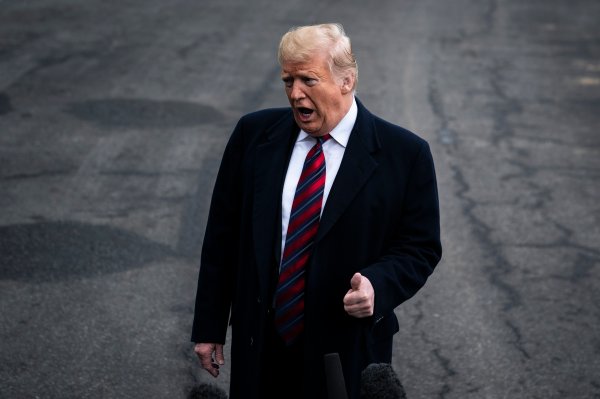 Trump Hyped a Poll That Says 57% of People Have Ruled Out Voting For Him in 2020
Next Up: Editor's Pick