When it comes to predicting the champions of Super Bowl 2020, one cultural behemoth has had surprising clairvoyance: The Simpsons.

Now that big night is happening, it’s worth revisiting just how the show managed to do it. We may not have a Simpsons Super Bowl LIV prediction to guide us as the San Francisco 49ers currently face off against the Kansas City Chiefs in Miami, Fla. But in previous years, Lisa Simpson proved to be an eight-year-old who knew a winning team when she saw one. She was right three years in a row back in the ’90s. And if you throw in one very memorable 2017 halftime show starring a flying Lady Gaga, you could say the show has been right about the Super Bowl a total of four times.

The Simpsons’ Predictions of Real-Life Events

If you’ve seen America’s longest-running primetime television show during the last three decades, you may have observed that some of The Simpsons’ plots have eventually played out in real life. Though it’s best known for its satirical comic sensibility, loads of the show’s fantasy outcomes have actually happened with startling accuracy, to the delight of fans. Among them: FIFA’s 2015 corruption, America’s 2018 Winter Olympics curling victory, and more than 15 other events.

So how did the show’s writers dream up all these future scenarios without a time machine?

“Are we supposed to believe the script writers have special powers?” asks statistician Sir David Spiegelhalter, a professor at the Statistical Laboratory at the Center for Mathematical Sciences at the University of Cambridge. “These coincidences reflect their creative imagination and luck.”

Spiegelhalter says that with a show that has run for this long, the hunches that miss likely far outweigh the ones that hit.

“The crucial issue about assessing coincidences that hit the target is to know how many shots have been taken. It’s like watching YouTube videos of holes-in-one. They’re amazing, but we don’t have to watch the zillions of shots that didn’t go in,” he says. After all, the show is television’s longest-running scripted show ever.

But something else could have been at work, says John Ortved the author of The Simpsons: An Uncensored, Unauthorized History: expertise.

During The Simpsons’ Super Bowl predictions winning streak from 1992-1994, the writers room was full of well-informed sports fans, with “a lot of Harvard guys” in the mix, says Ortved. “They weren’t dumb. And they liked to gamble, following their boss, Sam Simon,” he tells TIME.

Ortved says these “educated guesses” are inevitable. “It would be weird if there wasn’t some crossover,” he says.

With that in mind, let’s take a look back at a timeline of all the accurate Simpsons Super Bowl predictions, ahead of Super Bowl 53.

The victorious three-year-run of The Simpsons’ Super Bowl predictions all started on Jan 23, 1992, with the “Lisa the Greek” episode.

In the episode, budding sports prophet Lisa and her dad Homer team up for some good old sports gambling. The bet: if the Washington Redskins become the Super Bowl champions in Super Bowl XXVI, then she’ll still love Homer. But if the game goes the other way, she won’t. No pressure.

The Winner of Super Bowl XXVI:

Three days later, it happens. Lucky for the world’s most famous toon family, the Redskins best the Bills, 37-24, and the father and daughter go hiking together.

The Simpsons predict the Super Bowl again. Quarterback Mark Rypien #11 of the Washington Redskins drops back to pass against the Buffalo Bills in Super Bowl XXVI at the Metrodome on January 26, 1992 in Minneapolis, Minnesota. The Redskins defeated the Bills 37-24. (Photo by Gin Ellis/Getty Images)
Gin Ellis—NFL

The Simpsons’ Super Bowl episode gets a refresher the following year with some redubbing. This time, Lisa says the Dallas Cowboys will beat the Buffalo Bills in Super Bowl XXVII.

The Winner of Super Bowl XXVII:

Lisa calls it again. The Dallas Cowboys defeat the Buffalo Bills with a score of 52-17. Well done, Michael Irvin and Emmitt Smith.

The show re-airs the same episode with all new voiceovers to make it current. This time, Lisa predicts that the Dallas Cowboys will triumph again to surpass the Buffalo Bills.

The Winner of Super Bowl XXVIII:

Right on target, once again. By halftime, the Bills led 13-6, but they couldn’t hold onto their lead, and the Dallas Cowboys beat the Buffalo Bills again, 30-13. The Bills put up a good fight but went winless at four of their consecutive Super Bowl appearances.

One prediction that was a little more visual than factual was an episode foretelling the 2017 Super Bowl halftime show. Years before Lady Gaga ever took flight attached to a harness in a glittering Versace ensemble and matching boots, The Simpsons imagined a very similar grand entrance at a smaller venue: a Springfield concert, in the 2012 episode “Lisa Goes Gaga.”

Around five years later, it certainly looked a lot like that Simpsons episode when Gaga descended on Houston’s NRG Stadium for the 2017 Super Bowl Halftime show. Minus the pyrotechnic top the show imagined, the aesthetics were familiar: the harness, the silver outfit, the fact that she was airborne and the drones that hung in the air.

Ortved says the prediction is not so surprising, after all. “It doesn’t take Tiresias to guess that Gaga, one of the biggest music stars, might play a Super Bowl halftime show. And then look at the things that ended up being similar: she descended from the air, she sat at a piano, she had choreographed dance moves. All those things make complete sense,” Ortved says.

If you’re planning to place a bet on the 2019 Super Bowl, it might be wise to call a Simpsons writer first. 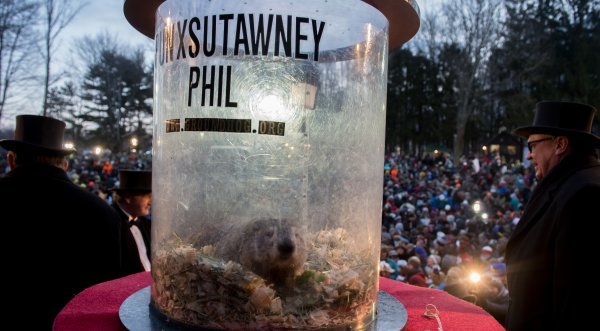 Punxsutawney Phil Just Came Out for Groundhog Day. Find Out When Spring Is Coming Already
Next Up: Editor's Pick