KANSAS CITY, MISSOURI - JANUARY 20: Tom Brady #12 of the New England Patriots gestures in the first half against the Kansas City Chiefs during the AFC Championship Game at Arrowhead Stadium on January 20, 2019 in Kansas City, Missouri. (Photo by Ronald Martinez/Getty Images)
Ronald Martinez—Getty Images
By Sean Gregory

Championship Sunday was unforgettable. And it’ll be a Super Bowl LIII for the ages.

Tom Brady, already the oldest quarterback to ever start a Super Bowl, will be back for his ninth trip to America’s greatest sporting spectacle, as his New England Patriots defeated the Kansas City Chiefs, 37-31, in a thrilling overtime AFC Championship Game at Arrowhead Stadium. Jared Goff, 24, became the youngest quarterback to win an NFC title game; he led the Los Angeles Rams to a controversial 26-23 overtime road victory over the New Orleans Saints. Once again, New England and Los Angeles will face off for a title: just a few months ago, the Boston Red Sox beat the Los Angeles Dodgers in the World Series. The Celtics and Lakers have met a dozen times in the NBA Finals.

Pundits — ahem — hyped the Patriots-Chiefs game, thanks mostly to the quarterbacks: Brady is, well, Brady. Patrick Mahomes, of the Chiefs, is the future of football. But the game plan of Pats coach Bill Belichick, which involved lots of physicality and double teams of Kansas City’s best players, stymied Mahomes at the start; at one point midway through the second quarter, he had -5 passing yards. The Pats set the tone early with a methodical 15-play, 80-yard opening touchdown drive; Sony Michel, who rushed for 113 on the evening, scored on a one-yard run. Mahomes looked ready to break out in the second quarter, when he avoided a sack on third down to keep a drive alive, and uncorked a beauty to Tyreek Hill for a 42-yard gain. On the next play, however, he badly overthrew a wide open Damien Williams, who would have waltzed into the end zone. On third down, a New England sack took the Chiefs out of field goal range. On the next drive, Brady hit Phillip Dorsett for a 29-yard touchdown right before halftime, giving the Pats a 14-0 advantage, and sending the Chiefs into the locker room utterly demoralized.

The Chiefs, who scored more points this season than all but two other NFL teams in history, were shut out at home in the first half for the first time since Andy Reid took over as coach in 2013.

Rex Burkhead #34 of the New England Patriots is tackled as he carries the ball in the second half against the Kansas City Chiefs during the AFC Championship Game at Arrowhead Stadium on January 20, 2019 in Kansas City, Missouri. (Photo by Patrick Smith/Getty Images)
Patrick Smith—Getty Images

Kansas City fired back, however, in the second half. The Chiefs cut New England’s lead in half in just over two minutes; Mahomes connected with Sammy Watkins on a 54-yard pass play, then zipped a 12-yard touchdown pass to tight end Travis Kelce. A 47-yard Stephen Gostkowski field goal put the Pats up back up two scores. At the start of the fourth quarter, a New England pass interference penalty gave the Chiefs a first and goal from the one; Mahomes rolled to his right – no quarterback is better at throwing on the run — and hit Damien with a dart, cutting New England’s lead to 17-14.

With 8:39 left In the fourth quarter, the game hinged on the fingers of Julian Edelman: he seemed to muff a punt that the Chiefs recovered in New England territory. Replays, however, showed this thumb did not graze the ball: the Pats kept possession. But an ensuing Brady pass slipped through his fingertips; Daniel Sorensen corralled the interception at the New England 45 yard line. Damien Williams caught a short pass and sprinted to the end zone for a 23-yard score to give Kanas City a 21-17, its first lead of the game. The freezing fans at Arrowhead Stadium, now all warmed up, exploded.

The Pats, however, weren’t done. On a third and eight, Chris Hogan made an incredible one-handed catch to keep the drive alive. On a fourth and inches from the Kansas City 10, Michel found another seam and scampered into the end zone untouched. New England went back on top, 24-21.

Kansas City got the ball back with just over 3 minutes left, and Mahomes had his chance to pull a Brady by pulling out a playoff victory in dramatic fashion. New England helped him with holding and pass interference penalties. Mahomes hit Sammy Watkins on a 38 yard pass play, then Williams scored his third touchdown on a two-yard run, completing a 5-plays, 68 yard drive.

But Brady’s Brady. He got the ball back with under two minutes left, at his own 35-yard-line. We’ve seen him do this so many times. But it’s still stunning when he pulls off the comebacks. On a third down, after a Chiefs penalty negated a Brady interception that would have clinched it for Kansas City, Brady lobbed a perfect sideline pass to Rob Gronkowski, for a 25-yard reception. Rex Burkhead ran for a 4-yard touchdown, giving New England a 31-28 lead.

Mahomes, it turns out, is Mahomes. The Chiefs got the ball back with 39 seconds left. And one 21-yard and another 27-yard pass play later, Mahomes put the Chiefs in field goal range. Harrison Butker nailed a 39-yarder to send it into overtime, where the dizzying theater finally came to a close. The Pats won the toss, Brady twice hit Edelman over the middle of the field on third and long pass plays, and threw to Gronk on another, converting key first downs. A 2-yard Burkhead touchdown run won it.

Brady completed 30 of 46 passes, for 348 passing yards, with a touchdown pass and two interceptions. Mahomes was 16 for 31, for 295 yards. He finished the AFC title game with 3 touchdown tosses; Mahomes did not throw an interception.

The AFC championship game, which started out as a potential stinker, turned into a stone-cold classic. The NFC championship game also had the potential to go down as a classic. Instead, it somewhat ended in disgrace. The crowd noise at the Superdome in New Orleans caused the Rams all kinds of problems; often, Goff would have to run around the line of scrimmage, shouting the play into everyone’s ears. With the Saints up 13-0 in the first quarter, the game basically got going on a fake punt. On fourth down at LA’s own 30-yard-line, Johnny Hekker took the snap and tossed a pass to Sam Shields short of the first down marker. But Shields dodged a tackle to gain 12 yards, and keep the game alive for the Rams. The Rams converted a field goal, and right before halftime, Los Angeles completed a seven-play, 81-yard drive for their first touchdown — a six-yard run by Todd Gurley, the Los Angeles star running back who spent most of the first half on the sideline — stealing the Saints’ momentum as the teams entered the locker room with New Orleans now up by just 3 points, 13-10.

New Orleans, however, responded. On its first drive of the second half, the Saints marched 71 yards down field, and scored a touchdown on a sneaky 2-yard pass from Brees to Taysom Hill, the backup quarterback who does a little bit of everything for New Orleans. This time, he caught his first touchdown pass of the season. Not to be outdone, LA strung together a 70-yard drive of its own; Goff hit tight end Tyler Higbee for a one-yard score; Higbee put a finger by his mouth, asking the New Orleans crowd to be quiet already. It was now 20-17 Saints entering the fourth quarter.

The teams traded punts to start, until Goff connected on passes of 39 and 33 yards, to set up first and goal at the New Orleans 7-yard-line: the Saints defense, however, held LA out of the end zone: the Rams tied the game at 20-20 on a short field goal. New Orleans got the ball back with just under five minutes left, and right before the two-minute warning, Brees lofted a 43-yard pass downfield; Ted Ginn Jr. soared to snatch it out of the air, at the LA 13 yard-line.

Then came the turning point: On the ensuing 3rd and 10, Los Angeles cornerback Nickell Robey-Coleman flew into Saints receiver Tommylee Lewis, like a missile, while Brees fired a pass in his direction: there could not have been a more obvious pass interference penalty. No one threw a flag. A fresh set of downs would have allowed the Saints to run down the clock and kick a short field goal to end the game. Instead, after a 31-yard-field goal by Wil Lutz gave New Orleans a 23-20 lead, the Rams got the ball back at their own 25, with 1:41 left, giving Goff plenty of time to get the Rams into field goal position. Give credit to Goff and the Rams for delivering. Greg Zuerlein made a clutch 48-yard field goal to send the game into overtime.

In the extra session, Rams linebacker Dante Fowler Jr. hit Brees on a pass play, sending the ball fluttering; John Johnson, who had fallen, intercepted the errant throw while on his back. Now, all LA needed was a field goal to go to Super Bowl LIIII; in spite of a bad snap, Hekker got the hold down, and Zuerlein nailed a 57-yarder that might have been good from 70. LA took its first lead of the game, and booked a trip to Atlanta.

Unfortunately, because of officiating incompetence, the Pats-Rams matchup feels a little tainted. The error should finally force the NFL to consider correcting obvious judgment calls. Everyone instantly saw the mishap, why not correct it?

Careers are at stake. These players have put their bodies on the line, their whole lives, in hopes of making a Super Bowl. Saints fans deserve better.

In two weeks, however, much of the grousing will be forgotten. Brady and Belichick will get another shot at a sixth championship, perhaps their last. The Rams, who three years ago moved back to Los Angeles from St. Louis, are loaded with talent on both sides of the ball, from Goff and Gurley to Aaron Donald, the best defensive player in the game right now, and Ndamukong Suh, who recorded 1.5 sacks agains the Saints. The last time Brady faced the Rams in the Super Bowl, in New Orleans in 2002, the Pats notched an all-time upset, winning the game on a last-second field goal, and kicking off the Brady-Belichick dynasty.

What a time for an encore. 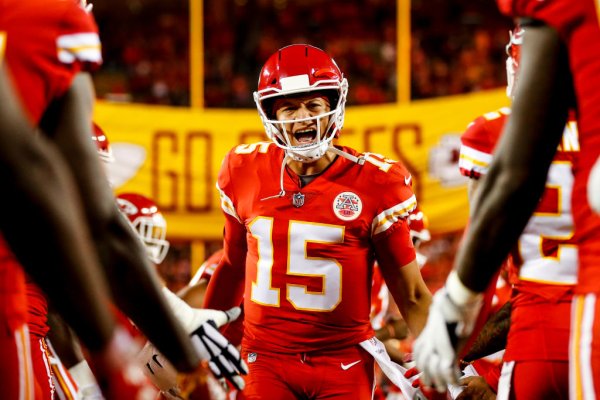 Why Sunday's AFC Championship Game Is a Bigger Deal for Patrick Mahomes Than Tom Brady
Next Up: Editor's Pick