President Donald Trump mocked climate change again on Sunday, just days after the Department of Defense released a report outlining the effects of climate change on its operations.

Referring to the major winter storm that has brought frigid temperatures and snow to large parts of the U.S., the President tweeted, “Wouldn’t be bad to have a little of that good old fashioned Global Warming right now!”

Trump’s denial of the overwhelming consensus of climate scientists comes just 10 days after his own Defense Department released the 22-page report, which assessed “significant vulnerabilities” the military faces from “climate-related events.”

The report specifically focused on the vulnerabilities 79 military installations face over the next 20 years due to the effects of climate change, which include recurrent flooding, drought, wildfires and thawing permafrost. It also noted cases where locations considered not currently vulnerable would likely be vulnerable in the future.

Additionally, the report said that “projected changes will likely be more pronounced at the mid-century mark; vulnerability analyses to mid- and late-century would likely reveal an uptick in vulnerabilities.”

The report is not the first time that the President’s dismissive view of climate change has been directly contradicted by evidence released by the Executive Branch. In November 2017, the Trump administration released a scientific report that stated that human activity was the dominant driver of climate change. And last November, his administration released the National Climate Assessment, which stated that climate change threatens “the health and wellbeing of the American people.”

Through his candidacy and presidency, Trump has routinely dismissed climate change, calling it a “hoax.”

Experts, including climate scientists at NASA, routinely stress the importance of the distinction between weather and climate, which Trump conflates in his tweet. Weather refers to the atmospheric conditions over a short period of time, while climate refers to long-term atmospheric patterns. 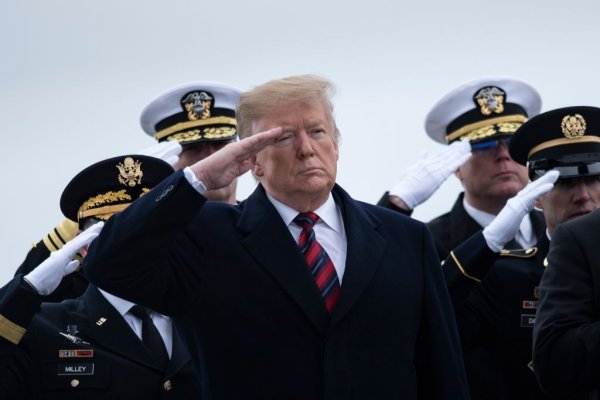 Trump Sticks to Presidential Script
Next Up: Editor's Pick