Pink Hats Flooded Washington Again, but Controversy and Competition Made for a Much Smaller Women's March

Protesters display their signs in front of the Trump Tower during the Women's March in Washington, DC January 19, 2019.
ALEX ROBINSON—AFP/Getty Images
By Abby Vesoulis

Droves of pink-hatted women gathered in Washington and cities around the country to march for women’s rights on Saturday, but the turnouts paled in comparison to those of the previous two years.

The day after Donald Trump was inaugurated as America’s 45th president, nearly half a million people flooded the streets of D.C. to protest him. But this year, as Women’s March, Inc. continues to absorb allegations of its own bigotry, only an estimated 100,000 people were there, according to the Associated Press.

Teresa Shook, a retired lawyer and grandmother who founded the movement on election night, called upon the march’s leaders to resign after two of them failed to adequately address the accusations. Co-President Tamika Mallory has been critiqued for her association to Louis Farrakhan, the anti-Semitic Nation of Islam leader who has compared Jewish people to termites, and Linda Sarsour, a board member and Palestinian-American woman, has also faced scrutiny over her personal beliefs on Israeli policy.

The women and allies who attended the event carried with them their signs, their children and their frustrations with the group’s leadership.

Mary Lou Frey-Nicholson, a nanny from New Bedford, Mass., traveled over 400 miles to be there. She previously told TIME that she had decided not to attend out of respect for Jewish people who felt marginalized by the allegations of anti-Semitism. But on Friday, she changed her mind after a night spent tossing and turning.

“I don’t want to be stopped by one person’s ill-advised alignments. There are thousands of women who are marching for the right reasons, and who don’t have affiliations with people who are racist,” she decided. “I’m marching with them.”

Zachary Nosanchuk, an 18-year-old college student in the area, said he was also conflicted over his decision to attend, but that he ultimately determined the march’s mission was larger than the sum of its parts.

“If there was a large party, and you really wanted to go, but two of the hosts were not your favorite people, you would probably still go,” he said. “I would like it if they resigned, but this is bigger than them.”

The march, which was originally slated to return to the National Mall, instead took place at a smaller venue. Though the organization blamed the National Park Service for the last-minute relocation, a spokesman for the agency said the request came from the organizers.

Competing marches took place around the country. Many were organized by Vanessa Wruble, one of the original women’s march organizers who says she was alienated from the leadership team because of her Jewish identity.

Women’s March, Inc. failed to respond to multiple requests this week for comment regarding Wruble’s allegation, but published an apology in November for ostracizing Jewish and LGBTQ members.

“Every member of our movement matters to us — including our incredible Jewish and LGBTQ members,” the group wrote. “We are deeply sorry for the harm we have caused, but we see you, we love you, and we are fighting with you.”

After separating from the Mallory and Sarsour’s team, Wruble helped create a separate organization that held nearly 350 marches on Saturday. She said groups of this nature shouldn’t be about the people who lead them, but the people in them.

“It’s very human to say there are leaders and those leaders are going to save us. When, in fact, it has always been the people themselves — coming together, working together — that have changed the world,” she said.

Sarah Kuhnell, who traveled from Ohio with her sister and mother to attend the D.C. Women’s March, Inc. event, said she was marching so her 6-year-old daughter never has to.

“The future of this country is on the wrong track. Even the little kids know it,” she said, beginning to cry as she held the sign her daughter made her. “It’s a waste of energy to be against anything. We need to fight for the things that matter.”

Though the group may be dividing, the main mission, the members say, is the same: women and their voices matter. 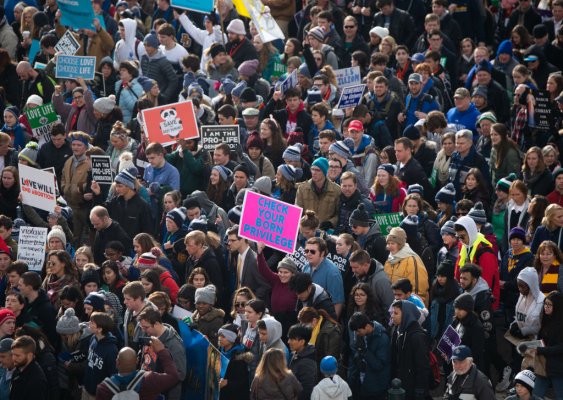