Trump's Presidency Is at Its Exact Midpoint. Here's What We've Learned

On the second anniversary of his inauguration, President Donald Trump is engaged in a no-win standoff with Congress, besieged by new allegations about his relationship with Russia and facing questions about his truthfulness.

As the first commander in chief elected without prior political or military experience, Trump raised many questions about what he might be like in the White House. But there were signs from the very beginning that this is where his presidency was heading.

Trump’s aggressive approach to conflict, his involvement with Russia and his tendency to misstate basic facts were all evident from the first weeks of his administration, not to mention the campaign.

Here’s a look at three telling moments from those first weeks.

Russian interference in the election

US President Donald Trump and Russia's President Vladimir Putin attend a joint press conference after a meeting at the Presidential Palace in Helsinki, on July 16, 2018.
Yuri Kadobnov—AFP/Getty Images

The moment: As a candidate, Trump repeatedly questioned the intelligence community’s October 2016 assessment that Russia was behind the hacking of the Democratic National Committee and Hillary Clinton’s campaign. But he took it to another level when he continued raising doubts as president-elect and then as president. “Hacking is a very hard thing to prove,” he said on Dec. 31, 2016. “So it could be somebody else.”

The facts: In July of 2018, the Department of Justice unveiled multiple charges against a dozen Russian intelligence officials for hacking the DNC, the Clinton campaign and state election systems. Still, Trump noted later that month that Russian President Vladimir Putin “was extremely strong and powerful in his denial” of interference.

What it showed: Trump’s repeated deference to Putin—even above his own Administration’s intelligence and judicial systems—continues to raise questions. According to a recent New York Times report, Trump has broken with traditional diplomatic protocol for foreign leaders in his face-to-face meetings with Putin, once even taking his interpreter’s notes.

Where things stand now: Trump lawyer Rudy Giuliani raised eyebrows during a CNN interview when he seemed to move the goalposts again, claiming inaccurately that he “never said there was no collusion” between the Trump campaign and Russia, only that there was no collusion directly involving the president. House Democrats have vowed to continue investigating the relationship.

The feud with John Lewis

The moment: In a Jan. 14, 2017 interview with “Meet the Press,” Democratic Rep. John Lewis said that he did not view Trump as a “legitimate president” and would not be attending his inauguration. Trump struck back at the civil rights icon, tweeting that his district is in “horrible shape” and “crime infested” and calling him “all talk, talk, talk.”

The facts: Lewis has long received bipartisan praise for his civil rights activism. He led sit-ins to desegregate lunch counters, integrated buses as one of the original Freedom Riders and suffered a skull fracture when he was beaten by a state trooper during the “Bloody Sunday” protest in Selma, Alabama, in 1965.

What it showed: First Lady Melania Trump once said her husband will “punch back 10 times harder” when attacked. That is been proved true, no matter how sympathetic his rival might be, and especially when Trump feels that his antagonist is threatening his standing as president. In December, the New York Times calculated that Trump had insulted 551 people, places and things on Twitter since declaring his candidacy.

Where things stand now: Trump is currently feuding with House Speaker Nancy Pelosi, cancelling travel arrangements for her planned visit to Afghanistan in apparent retaliation for her postponement of the State of the Union address while the shutdown continues. In recent days, Trump has also feuded with Utah Sen. Mitt Romney, former Secretary of Defense James Mattis, Amazon owner Jeff Bezos, and his own former lawyer, Michael Cohen.

The size of the inauguration crowd

Few photos launch a months long investigation. This one did. From the moment the National Parks department trolled Trump on crowd size in January, the White House's brash assertions of questionable truth about the January 20th inauguration's crowd size became endless fodder for jokes. So unforgettable was this debacle that former White House Press Secretary Sean Spicer actually rolled onstage at the Emmys in September, and the internet brought it full circle when when they roasted Trump on crowd size again again after December's Christmas tree lighting.
Donald Trump is inaugurated president on Jan. 20, 2017.

The moment: At the Trump administration’s first official press briefing on Jan. 21, 2017, then-Press Secretary Sean Spicer repeatedly claimed that the inauguration crowd was the largest ever, arguing that the news media tried to minimize it. “This was the largest audience to ever witness an inauguration—period—both in person and around the globe,” he said.

Where things stand now: House Democrats have vowed to investigate an explosive report from BuzzFeed that Trump directed his personal attorney, Michael Cohen, to lie to Congress about negotiations over the Trump Tower Moscow project. Trump’s own attorney general nominee, William Barr, said at his confirmation hearings before the report came out that directing a witness to lie would be obstruction of justice. 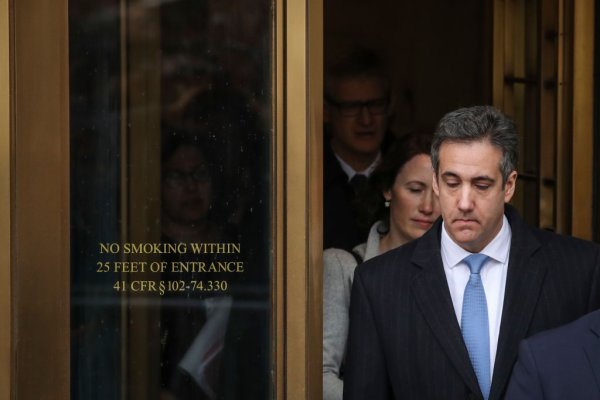