North Korea's Leading Envoy Has Arrived in the U.S. to Meet Pompeo — and Maybe Trump

Trump and Kim met in Singapore in June, the first ever conference between sitting leaders of the U.S. and North Korea. They signed a vague framework pledging to work toward the “complete denuclearization of the Korean Peninsula,” but little headway has been made since on curtailing North Korea’s weapons programs.

Kim Yong Chol’s visit could mark a minor breakthrough in the diplomatic impasse. The North Korean envoy last visited the U.S. in June, ahead of the first summit. Pompeo had planned to travel to Pyongyang in November, but that mission was scrapped after Trump insisted that North Korea had not made “sufficient progress” toward denuclearization. The visit this week also comes as Trump announced a new missile defense strategy Wednesday that identified North Korea as an ongoing military threat.

But Kim Jong Un signaled optimism for the stalled talks in his annual New Year’s address earlier this month, reiterating his willingness to meet Trump again and predicting that relations between the two adversaries could “advance at a fast and excellent pace.” 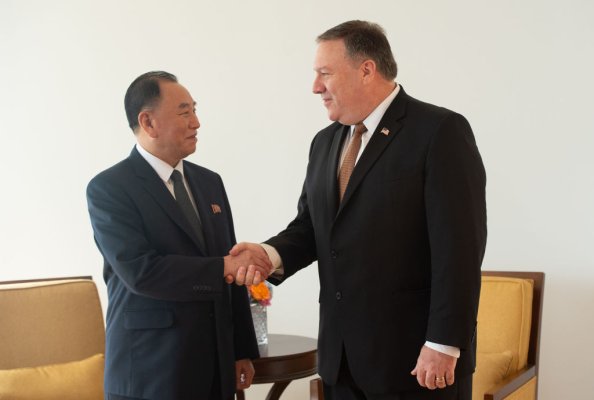 U.S.-North Korea May Discuss Second Summit This Week
Next Up: Editor's Pick