I Once Led NATO. President Trump's Talk of Leaving Will Make Only Putin Happy

Flags of the NATO member states stand in the NATO headquarters on Dec. 4, 2018 in Brussels, Belgium.
Thomas Trutschel—Photothek/Getty Images
Ideas
By James Stavridis
Admiral Stavridis (Ret.), a TIME Contributing Editor, was the 16th Supreme Allied Commander at NATO and is Vice Chair, Global Affairs at The Carlyle Group and Chair of the Board of the Rockefeller Foundation. He is the co-author of 2034: A Novel of the Next World War. His new nonfiction book is To Risk It All: Nine Conflicts and the Crucible of Decision

The phrase that I imagine Vladimir Putin hates above all others is “transatlantic community.” It’s an awkward bit of diplomatic-speak, sure, but it describes the cooperative zone of democratic nations stretching from just beyond Russia, across Europe and the broad Atlantic, and thence to the shores of California. This enormous collective represents about half of the world’s GDP, is a metaphorical bridge across that ocean connecting the democracies of North America to those of Europe.

At its core is the North Atlantic Treaty Organization, an organization with nearly 70 years of history, that Putin seems to find deeply distasteful because it is very threatening to Mother Russia. He has spent much of his life trying to dismantle it, from his days as a KGB spy to his current domination of the Russian Federation — and has failed. Putin famously said the greatest tragedy of the 20th century was the collapse of the Soviet Union and Warsaw Pact. It is impossible to separate that from the triumph of NATO.

The recent New York Times report that President Trump was considering pulling the U.S. out of NATO (going beyond his talk on the campaign suggesting that he would rethink America’s relationship to the alliance, which he described as “obsolete”) rocked capitals around the world. It is hard to imagine the pure glee that Putin must feel. Even discussing the idea of a U.S. withdrawal from NATO — which would be a death knell for the organization — weakens the center of gravity of the alliance: its unity of spirit and bedrock faith that the members believe, as the treaty declaims, “an armed attack against one … shall be considered an attack against them all.” Why Trump is so opposed to NATO seems to range from his belief that America takes on too much of NATO’s economic burden to something hidden in his strangely friendly relationship with Putin. The reasoning is opaque.

But given the power and success of NATO, there is no coherent reason the U.S. would consider pulling out. There has never been a richer, more capable alliance in human history. Even without the United States, it collectively spends the second-largest amount on defense in the world, ahead of both China and Russia. Their soldiers stand and fight alongside ours with real courage, which I have witnessed personally on the battlefield.

When I was Supreme Allied Command of NATO, I spent four years watching these soldiers fight and die in combat in operations from Afghanistan to Libya to the Balkans to Iraq to the waters of the Indian Ocean on dangerous counter-piracy missions. I never doubted the courage of the troops in the field, but I worried a great deal about political unity in Brussels, the headquarters of the organization. As the leader of global operations, I briefed the heads of state on our missions. Many of them would gladly have opted out of the hard fighting, but what kept all of them together was a belief in the steadiness and stability of the United States.

Again and again, I watched Secretaries of Defense like Robert Gates and Leon Panetta (a Republican and a Democrat, by the way), rally the nations by wielding the influence of America. They were sustained by Presidents Bush and Obama. The value of NATO has always been above partisan politics — until now.

While it makes sense to continue to pressure the Europeans to hit their self-stated goal of spending 2% of GDP on defense, discussing getting out of the alliance does not. We should spend less time yelling at our allies and more time figuring out how they can contribute even more effectively. The better question here is: How can we get more out of NATO?

The first is simply to continue their contributions to the war in Afghanistan. We are at a delicate point that eventually comes to all insurgencies: the moment of potential but yet unrealized negotiations. Now is not the time to be withdrawing troops, either American or European, especially because if we leave, the Europeans will gladly follow. Pushing NATO as an organization to continue to lead the fight is crucial.

The second is that NATO can be a far stronger force in the struggle against the Islamic State. The recent suicide bombing in Manbij, which killed 19 people, including four Americans, should remind us that talk of the death of ISIS has been greatly exaggerated — including what has been said by the President himself. NATO can do this through special forces on the ground, more airstrikes, increased cyber activity and logistic support. As is the case in Afghanistan, we should be adding troops, not withdrawing them from Syria — but they certainly don’t have to all be from the U.S. Get NATO more engaged.

Thirdly, we need more alliance solidarity against further Russian aggression. Putin will continue to push on the edges of the alliance, both against formal members, such as Estonia, and partners like Ukraine. He will build more dangerous and destabilizing weapons systems and deploy them to places like Kaliningrad, a Russian enclave in the heart of Europe. Putin will use a lethal mix of social networks, cyber-attacks, unmarked troops and special forces — what’s called hybrid warfare — in the Levant and on the edges of Europe. We need a coherent, capable alliance to push back, including training missions for the Ukrainian military, for example.

President Trump is a businessman. He should understand that NATO is a terrific form of leverage. Our engagement brings us willing partners, who have sacrificed blood and treasure alongside us again and again; as Winston Churchill rightly said, the only thing worse than fighting with allies is fighting without them. Loose conversations about pulling out of NATO risks throwing that leverage away. It would be bad business — and worse geopolitics. 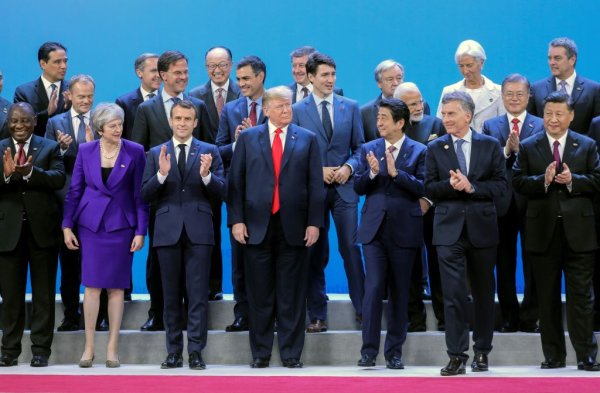 As World Powers Fail to Work Together, Global Risks Grow More Dangerous
Next Up: Editor's Pick