6 High-Protein Foods That Are Healthier Than Beef

Americans are obsessed with protein. It’s touted as the cornerstone of any healthy diet, since it helps people feel full and builds muscle. But most Americans eat too much protein every day, according to federal estimates—and they’re going especially overboard with animal proteins, namely red meat.

It’s becoming clear how big a problem excessive red-meat consumption can be for health. Research has found associations between diets heavy in red and processed meats and many chronic diseases, including Type 2 diabetes, heart disease and cancer. Red meat comes with high amounts of saturated fat, and processed forms, like bacon and sausage, often contain chemicals that have been linked to cancer. But protein found in plants is linked to the opposite: lower rates of many of the same diseases and longer lives, thanks to the fiber, healthy fats and micronutrients that come with it.

Swapping beef for protein-rich plants like beans, peas and nuts has big benefits not just for people’s health but also for the health of the planet, according to a report published in January by the World Economic Forum (WEF). If people all over the planet made one change—switching from beef to other sources of protein—global food-related greenhouse-gas emissions would fall by 25% and diet-related deaths would drop by 5% in wealthy countries, the report estimates. Red-meat production is hard on the environment because raising cattle requires large plots of land and emits lots of greenhouse gases into the atmosphere.

The news gets better if people are willing to expand their protein palate. In another report, published Jan. 16 in the Lancet, 37 experts from 16 countries devised a diet they agreed was ideal for people and the planet. According to the group, Americans—who eat more than six times the recommended amount of red meat—should aim for little or none of it and instead get most of their protein from plant sources.

“We’re on a lose-lose path at the moment: we’re destroying human health, and we’re destroying the environment at the same time,” says Dr. Walter Willett, one of the authors of the Lancet paper and a professor of epidemiology and nutrition at the Harvard T.H. Chan School of Public Health. “There is a win-win path, by shifting to more plant-based protein sources and producing them in an environmentally sustainable way.”

These health and planetary benefits are making plant-based proteins a valuable area for innovation. In 2018, a third of U.S. consumers said they planned to buy more plant-based products in the next year, according to data from the independent market-research firm Mintel. Companies are now racing to create or improve alternative proteins—some familiar, others funky. Each of them is healthier than traditionally raised beef and better for the environment, according to the latest reports.

Startups are experimenting with using animal cells in a lab to grow food products that are genetically identical to poultry, pork, beef and fish. Cultured meat is only slightly healthier than the traditional kind—it has a better fatty-acid profile—but it is more sustainable, since cultured meat reduces the environmental and ethical problems associated with conventional farming, according to the WEF.

Cultured meat isn’t yet approved by the Food and Drug Administration, but companies are ready. In December, Just Inc., a San Francisco-based company famous for making vegan “eggs” from mung beans, partnered with a Japanese farm to produce cultured Wagyu beef. “[Cultured meat] can be a sustainable protein for the world to consume,” says founder Josh Tetrick.

Spirulina, or blue-green algae, has been a staple of juice bars and health-food stores for years. But most people still don’t think of the aquatic organisms as food. They may in the future: spirulina has a similar nutritional profile to eggs, according to the Lancet paper. Though it’s high in salt, spirulina powder can be mixed into smoothies, wraps, energy bars and desserts. Algae produces few greenhouse gases and could “reduce deforestation due to soy and other feed production” if consumed instead of red meat, the WEF report says.

Bugs are technically meat. But raising insects for food is far more sustainable than traditional livestock because they emit less greenhouse gas, mature and reproduce quickly, and require much less land and water, according to a 2017 paper published in the journal Global Food Security. Of the alternative proteins included in the WEF report, only wheat and nuts produce less carbon dioxide—the dominant greenhouse gas—than insects. Food-grade, high-protein insects, like crickets and grasshoppers, are already widely available as “flour” (they’re pulverized into a powder) and as ingredients in energy bars and chocolates.

Switching to beans means big gains for health, since they’re rich in fiber, iron, potassium and amino acids, as well as protein. They’re great for the planet too: a 2017 paper published in the journal Climactic Change predicted that the U.S. could achieve up to 74% of its greenhouse-gas-reduction goals by 2020 if Americans would just start eating beans instead of beef. “Beans really fit that profile of being the best available replacement for beef, at least in terms of minimum environmental impact and maximum health impact,” says Helen Harwatt, an environmental social scientist at Harvard and co-author of the paper. Livestock farming accounts for about 15% of all greenhouse-gas emissions, but beans take far less energy to produce and harvest—and they’re much less expensive than meat and most meat substitutes.

People who want plants to taste and feel like meat have more options than ever. Soy-based tofu, the most ubiquitous meat alternative, has almost 10 g of protein per 3-oz. serving, along with fiber and healthy fats. It’s also lighter on greenhouse-gas emissions than meat. And pea protein is now popping up in all kinds of products, like Beyond Meat’s buzzy veggie burger, which looks, tastes and cooks like beef. Switching beef for pea protein has a bigger impact on improving health than any other alternative protein, the WEF says, and it’s one of the most sustainable swaps.

Making nuts a main protein source is a “double whammy” for health, Willett says, since nuts reduce risks for the diseases linked to red meat while offering important nutrients. Benefits vary by nut, but just about every type has protein, healthy fats, vitamins and minerals. The WEF also crowned nuts the best protein alternative to reduce emissions of carbon dioxide since they release virtually none during production. 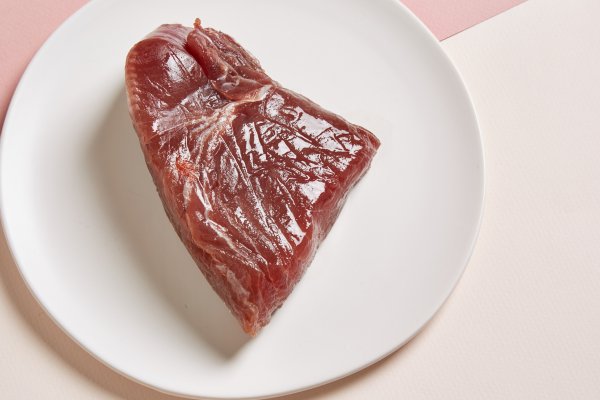 Celebrities Are Fighting Over the 'Keto' Diet. Here's What Science Says About How Healthy It Is
Next Up: Editor's Pick