Showtime’s Black Monday opens with a panorama of Wall Street on Oct. 19, 1987–the date of the catastrophic stock-market crash that gives the show its name. A white-haired businessman crumples on a curb, sobbing. Two giddy punks spray-paint YUPPIES LOST on a pillar above his head. And a chauffeur clambers out of a Lamborghini limo the color of fresh blood just in time to watch a jumper in an expensive-looking suit slam through the car’s roof.

The apparent suicide remains unidentified as the show, which premieres on Jan. 20, jumps back a year to provide a day-by-day account of the events leading up to a crash whose cause real-world economists have never conclusively identified. In its studious avoidance of glamorous antiheroes like Wall Street‘s Bud Fox and Gordon Gekko, Black Monday makes the realm of high finance look pretty pathetic. Investment-banker characters that might have been aspirational figures for baby boomers in the prosperous ’80s mostly come off as petty jerks or immature nerds. From a distance of three decades, their superior smirks foreshadow not just the dotcom and subprime crises that hit the subsequent two generations, but also the rise of a certain smug billionaire President.

The show is just the latest in a wave of diverse capitalist satire sweeping film (see: Sorry to Bother You, The Big Short) and television created by–and intended for an audience of–Gen X-ers and millennials. There are brutal and unflattering portraits of the superrich like HBO’s Succession and Showtime’s Billions. Comedy Central’s Corporate eviscerates white collar office culture and the megacorps that promote it, while NBC’s Superstore goes for gentler laughs at the expense of big-box chains. AMC’s absurdist worker-alienation allegory Lodge 49 is as subtle as TV creator Sam Esmail’s plausible economic dystopias, Mr. Robot and Homecoming, are striking.

Conceived by Happy Endings creator David Caspe and Jordan Cahan, with a pilot directed by executive producers Seth Rogen and Evan Goldberg, Black Monday views Wall Street‘s folly from the perspective of upstart firm Jammer Group. Its flamboyant principal happens to be the Lamborghini’s owner, Maurice “Mo” Monroe (Don Cheadle, also an executive producer), a cocaine enthusiast who lives like a pop star and prides himself on his street smarts. The Bud to his Gordon arrives in the form of Blair Pfaff (Andrew Rannells), a callow Wharton grad whose killer algorithm has big firms fighting over him–until a dust-up with Mo renders Blair unemployable by anyone but Jammer. (An episode where Mo is shadowed by a Hollywood type researching an “untitled Oliver Stone Wall Street project” suggests both that the parallel is intentional and that Stone’s rise-and-fall narrative may get a Working Girl twist.)

Jammer’s employees are outsiders in their WASPy field for reasons of race, gender, religion or (deeply closeted) sexual orientation. That doesn’t prevent them from being crude, malicious products of their Wall Street environment, the type of guys who boast about having sex with prostitutes in the office. Even the only adult in the room, Mo’s deeply undervalued deputy and ex-girlfriend Dawn Darcy (Regina Hall, whose characteristically warm performance gives viewers an unexpected hero), has to indulge their sophomoric antics to survive.

What makes Jammer tolerable is the threat it poses to an industry Caspe and Cahan portray as being numb to human suffering, where bratty blue bloods like the hilarious twin “Lehman Brothers” (both played by comedy treasure Ken Marino) hold all the power. Watching Black Monday, it’s hard to resist fantasizing about a financial system less beholden to such buffoonery and greed.

Similar personality traits predominate in one of last year’s most unfairly overlooked comedy debuts, Corporate, which recently began its second season. Matt Ingebretson and Jake Weisman, who co-created the show with Funny or Die alum Pat Bishop, star as perpetual “junior executives in training” at multinational monolith Hampton DeVille. (Think Berkshire Hathaway meets Halliburton, with the brand ubiquity of Amazon.) Along with their human resources buddy Grace (the wonderful Aparna Nancherla), the office mates strive to avoid humiliation in their competitive, bureaucratic workplace.

Corporate isn’t an updated version of The Office, however; it’s a full-on satire of contemporary global capitalism. That broad purview allows for wilder, more elastic storytelling than that of Black Monday. Hampton DeVille is the kind of company that will create a 9/11 memorial holiday just to sell product. New episodes that match Season 1’s gonzo greatness chronicle the executive team’s efforts to invent a lucrative addiction (makeup for men) and introduce a cowgirl billionaire (Kyra Sedgwick in the guest appearance of a lifetime) who’s equal parts Ted Turner, Dolly Parton and Annie Oakley. Pessimistic takes on technology, media, identity politics, the environment and the quest for personal fulfillment are baked into each of these profit-driven nightmares.

This sitcom’s themes might bear the closest resemblance to Enlightened, a brilliant-but-canceled HBO dramedy that cast co-creator Laura Dern as a corporate executive whose nervous breakdown puts her on the fast track to becoming a whistle-blower. Corporate even owes a substantial debt to anticapitalist pranksters like the Yes Men and the anticonsumerist magazine Adbusters, which helped ignite Occupy Wall Street–a movement that, not coincidentally, made young adults and the pop culture that caters to them more receptive to leftist ideology.

Yet Corporate avoids sanctimony thanks, in part, to its frequent reminders that outspoken radicals can be hypocrites. It’s a prudent hedge, especially considering that the show airs on a network owned by multinational conglomerate Viacom (which, like Showtime’s parent CBS, is itself a subsidiary of National Amusements). TV’s critiques of capitalism may not be ideal for fomenting a revolution, but they certainly give viewers something subversive to think about during commercial breaks. 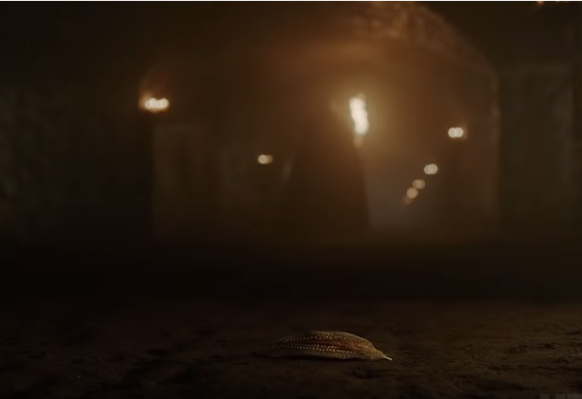 Here's the Significance of That Feather in the Game of Thrones
Next Up: Editor's Pick