The Transportation Security Administration checkpoint in Terminal B is closed at Houston's George Bush Intercontinental Airport in Houston, Tx. on Jan. 15, 2019 due to shortage of staff related to the shutdown of the federal government.
Xinhua News Agency—Xinhua News Agency/Getty Images
By Alan Levin / Bloomberg

(Bloomberg) — Houston’s George Bush Intercontinental Airport has closed portions of one terminal again as a result of higher absentee rates among airport security screeners, who have been forced to work without pay during the partial government shutdown.

The security checkpoint and public areas where passengers get boarding passes in Houston’s Terminal B was shut Wednesday for the fourth day in a row, the airport said on its twitter feed. No flights were affected because passengers could access Terminal B gates through other airport entrances.

The Transportation Security Administration’s struggles during the partial shutdown — which has blocked funding for more than a dozen U.S. departments and agencies — have been among the most high profile. In recent days, the TSA was forced to close screening lanes at Atlanta’s Hartsfield-Jackson and Virginia’s Washington Dulles airports.

On Monday, 6.8 percent of screeners had unscheduled absences from work, more than twice the rate from the same day a year ago, according to the agency.

The government has been partially shut since Dec. 22 in a dispute over whether to fund a wall on the Mexico border. 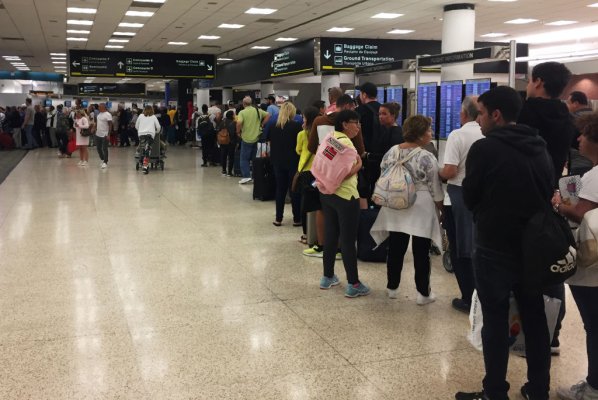 The Shutdown Is Disrupting Travel at America's Biggest Airports. And It's Probably Going to Get Worse
Next Up: Editor's Pick