Delays at Dover port, on the south coast, could lead to shortages of goods in British shops.
Andrew Aitchison—In Pictures via Getty Images
By George Steer

Fears of food and medicine shortages are the top of some people’s concerns in the U.K. as the possibility of a no-deal Brexit increased after a proposed deal by British Prime Minister Theresa May was rejected by the U.K. parliament. Some U.K. citizens and businesses have been making preparations by stocking up on essential necessities that are imported from the E.U. amid uncertainty about supplies in the event the U.K. leaves the E.U. without a deal.

A no-deal Brexit has been described by lawmakers, business chiefs and commentators as catastrophic for food supplies.The British government has said that preparing for a no deal is an “operational priority” in an effort to quell fears amid reports of potential shortages of many basic goods such as toilet paper.

The E.U. has warned that transport between the U.K. and the rest of the continent would be “severely impacted”, with extra checks potentially clogging up customs points for six months after March. For companies that depend on goods brought in from Europe – especially industries that depend on ‘just-in-time’ deliveries of key components – the costs could be massive.

The political uncertainty has been reflected in the increase of sales of ‘Brexit Boxes’ –a care package, worth £295 ($380) containing dozens of tins of macaroni cheese, sweet and sour chicken and beef and potato stew, as well as a water filter and a fire starter.

They are being sold by James Blake who set up the company Emergency Food Storage U.K. in 2009 with the aim of “making emergency preparedness as simple as possible.” Blake began selling the ‘Brexit Boxes’ in December and is now selling around 25 a day with a noticeable up-tick since May’s deal was rejected in parliament. “People are concerned,” he said. “I’ll be fine, I’ve got a warehouse full of supplies, but other people just want to feel reassured”.

Online discussions abound about Brexit preparations. A Facebook group, 48% Preppers (a reference to the size of the Remain vote in 2016’s referendum), set up to “discuss the practical preparations people are making for life after Brexit,” has close to 5,500 members, half of whom joined in the last month. The group aims to get as many people as possible prepared for the “food shortages, shortages of medicine and mass unemployment” that they say will follow a no deal Brexit.

A leaflet has been circulating online, inspired by the Swedish Civil Contingencies Agency publication “If Crisis Or War Comes” and addressed to the “residents of what is currently known as the United Kingdom” ranks Brexit alongside “extreme weather, critical infrastructure attacks and military conflicts” in its list of crises readers should be worried about most.

While some of the doomsday-like individual preparations may be a little extreme, there are some very serious concerns for businesses and local authorities around supplies of drugs and products imported from the rest of the E.U. if a no-deal Brexit comes to pass. Amazon U.K. chief Doug Gurr went so far as to say there could be “civil unrest” if Britain leaves the E.U. with no trade deal in place. And in a scathing report from December, Kent County Council even warned that: “Bodies may remain uncollected and children might miss exams due to gridlocked roads in the event of a no-deal Brexit”.

Pharmaceutical companies have been asked by the Department for Health and Social Care (DHSC) to have a minimum of six weeks’ extra supply over and above their usual reserves. Novo Nordisk, a healthcare company that focuses on diabetes care have been making preparations to ensure supplies of insulin and aren’t taking any chances. “Normally our reserves are for 7-8 weeks. At the moment, we have 17 weeks of stock ready to go, and have contacted an air freight firm that’s on standby should we need extra supplies to be brought in,” said a spokesperson.

“We import everything – no insulin is made in the UK for us or any other supplier that I know of.”

Dr Liz Breen, a researcher in health service operations at the University of Bradford, believes pharmaceutical supply chain shortages are relatively common, but that a no-deal Brexit could exacerbate the problem.

“I’d imagine current shortages will be amplified,” she tells TIME.

More serious, according to Dr Breen, is the threat of what is known as the bullwhip effect – when small changes in demand lead to inefficiencies and stock shortages further up the supply chain. It was in order to avoid this happening that Matt Hancock, Minister for Health, urged health and social care providers – including hospitals, care homes, GPs and community pharmacies – not to stockpile additional medicines themselves.

Instead, pharmacies may soon be able to overrule GP prescriptions to ensure stocks of certain drugs do not run low – though The Pharmacists’ Defence Association claims this could “pose a risk to patient safety”.

According to the Office for National Statistics, around 30% of the UK’s food is imported from the EU, yet Britain’s big supermarket chains hold as little as one-and-a-half days’ worth of fresh food – much of which is imported from the EU – in their supply chain. Grocery superstores Tesco and Marks & Spencer announced last week they are stockpiling packet and tinned foods in preparation for a no deal.

“Smaller firms, which are already struggling because of the difficult retail environment in the UK, are going to suffer most,” said Patrick O’Brian, a retail analyst at data and analytics company GlobalData. “Food supplies, as well as other basic goods, will all be squeezed.”

Nick Barbasiewicz, a restaurant-owner in Kent, regularly visits France to stock up on fresh produce, and worries that extra checks could affect his profits.

“I’m very anxious,” he says. “I probably buy half of my stock in France, so if I’ve got to wait all day at customs it’s going to make [crossing the Channel] a lot less appealing. My product would be worse, and I’d make less money.

“I get vegetables, fish, dry goods and wine whenever I go,” he added. “I can’t get certain cuts of meat in the UK, smoked herring, stuff like that. So I’ll be piling those things in the fridges. I used to go to France every fortnight but at the moment I’m going once a week.”

Not everyone is downbeat about the prospect of a no-deal Brexit, however — especially on the more right-wing side of the Conservative Party. Jacob Rees-Mogg, a Conservative lawmaker who favors the cleanest break from the bloc, maintains it would “not be the end of the world.”

Some believe the fallout from a no deal exit could foster a sense of shared purpose in a country that appears more divided than ever. In a tweet he has since deleted, Anthony Middleton, who served in the British special forces and presented the television show ‘SAS: Who Dares Wins’ on Britain’s Channel 4, said leaving the EU without a deal “would actually be a blessing in disguise. It would force us into hardship and suffering which would unite & bring us together, bringing back British values of loyalty and a sense of community!” 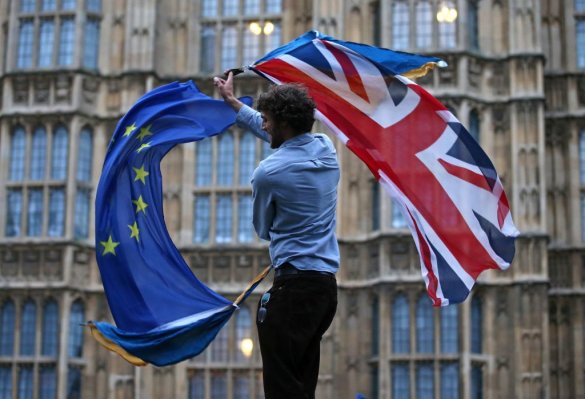 'Enough is Enough.' How European Media Responded to the Brexit Deal Defeat
Next Up: Editor's Pick