People Are Convinced This Wedding Singer Is Justin Trudeau's Doppelgänger

This combo shows a file photo taken on October 12, 2018 of Canada's Prime Minister Justin Trudeau (L) speaking at the end of the 17th Francophone countries summit in the Armenian city of Yerevan; and an image of Abdul Salam Maftoon (R), an Afghan singer and contestant of the television music competition 'Afghan Star', speaking during an interview with AFP in Kabul on January 13, 2019.
WAKIL KOHSAR—AFP/Getty Images
By Raisa Bruner

A wedding singer didn’t know who Canadian prime minister Justin Trudeau was — until he appeared on an Afghan music contest and judges started noting the uncanny similarities between the two men.

Now, some people who watched are convinced Abdul Salam Maftoon is a doppelgänger for the world-famous politician and Maftoon, a 29-year-old singer reportedly from the remote region of Badakhshan in northeast Afghanistan, has a new claim to fame entirely separate from his abilities to entertain.

Maftoon has been competing on Afghan Star, a televised music contest in the country. They’re now down to the top eight contestants — and Maftoon has been sailing through, getting full marks from the judges in his latest song. (You can watch him do his thing around the 9-minute mark of this latest video.) The finals are March 21; only time will tell if he lasts that long.

But what’s taken spectators by surprise is recognizing his resemblance to Trudeau, thanks to his dark hair, facial structure and deep set eyes. (Maftoon also rocks some golden front teeth, in a noticeable departure from Trudeau’s pearly whites.) According to one of the show’s judges, Maftoon has what it takes for the Afghan music scene: “He has that god-gifted vocal ability,” Qais Ulfat told the BBC. “This guy could be the next Justin Bieber.”

Whether or not he wins — and Maftoon says he thinks his chances are “50 percent” better thanks to his now-viral status — Maftoon already knows his comparison to Trudeau will be a boon for his career back home, where he expects to pick up more business thanks to his newfound fame. 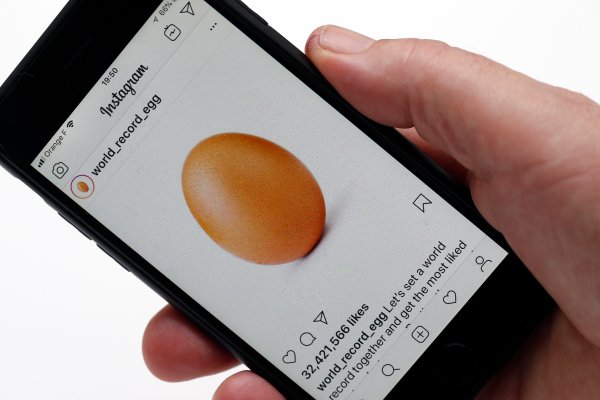 The Instagram-Famous Egg Already Wants to Crack a New Record
Next Up: Editor's Pick